That is the horrifying image greeting most Facebook users who are trying to log on to the site just after 12:00 p.m. Eastern time. Down Detector indicates that users across the United States are reporting an outage.

Pls. No questions about when #Facebook will be back up, we do not know… Thx! #LAPD

Pls. No questions about when #Facebook will be back up, we do not know… Thx! #LAPD

The site is also down in the United Kingdom, according to English network ITV:

The outage is being reported in Canada as well, and on NBC:

#impeach RT @micnews: This is the world we live in now (via @jordan327) pic.twitter.com/OnwZmzhJcF

The cause of the outage is not known at this time, but some on Twitter are speculating that the hactivist group, Anonymous, might be responsible.

On Facebook’s developer page, it states that the outage was reported that was “affecting all API and web surfaces” at 12:02 p.m.:

Facebook's developers portal is going in and out, but shows this when it responds: pic.twitter.com/MOOODP6jMP

The last outage for the site came on June 19, but that was regarded as “brief” by the social media giant. It’s at times like this that you have to think of the scene in The Social Network when Jesse Eisenberg says, “We don’t crash ever!” Watch it here: 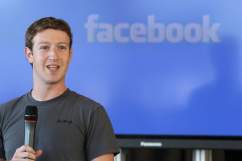