Our first official look at the iPhone 6 is mere weeks away. Can’t wait any longer? Watch these amazing videos of leaked iPhone 6 components.

In the video above, one YouTuber tries his hardest to put a scratch in the phone’s screen.

The video, uploaded by noted tech guy Marques Brownlee, claims to shows off the iPhone 6‘s sapphire crystal display. He takes his knife, his keys, and even his foot to the display, and doesn’t manage to leave a scratch. If this screen is the real deal, then the iPhone 6 will definitely appeal to clumsy folks. 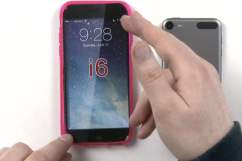 WATCH: Video Shows Just How Thin the New iPhone 6 Will Be on Release

Even though the iPhone 6 is far from ready to launch, fake iPhone 6 “clones” are already hitting the market. Even though this isn’t a real iPhone 6 leak, it’s an interesting look at what the iPhone 6 might look like once it launches for real.

Marques Brownlee has made quite a name for himself with his iPhone 6 videos, and this is one of the most interesting ones. The iPhone 6 “dummy” featured above isn’t a functioning phone, but it does allow iPhone case manufacturers to start producing their own iPhone 6 cases without having to wait for the actual phone to hit store shelves. 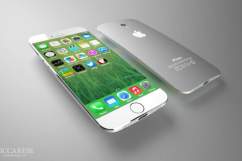 The video above from Ty Moss gives you the rundown on some of the most intriguing iPhone 6 leaks to date. If you’re skeptical about some of the leaked iPhone 6 pics that have been making the rounds, Ty Moss offers some excellent insight.