Hot on the heels of their big iPhone 6 event, Apple is hosting another event to showcase OS X Yosemite and the new iPads. The event was originally rumored to take place October 21, but Apple Insider now reports we’re looking at a October 16 event instead. Here’s what you need to know about this event and the products that Apple has coming down the pipeline just in time for the holiday shopping season.

Want to see all our Apple coverage in one place? Check out all the Apple news here.

1. The October 21 Date Is Contested By Some Sources

While MacRumors initially reported that Apple would have an event on October 21, they have since noted that a report from the Loop contradicts that early report. Apple has yet to confirm a date for the keynote event, and WhenIsKeynote.com notes that there is no confirmed event, though it does state that we can expect the next iPad reveal sometime in October. BGR notes that last year’s iPad event was held on October 22.

If the next Apple keynote event really will take place on October 16, we might not know until about two weeks before the event is scheduled. In the case of the recent iPhone 6 launch keynote, Apple did not confirm the rumored date of the September 9 event until 13 days beforehand.

You can see how Handoff and phone calls will work in Yosemite by watching the video above.
Check out the Verge’s review of the iPad Air above.

According to Bloomberg, there is some evidence that Apple is working on two new iPads: a 9.7-inch screen model, as well as a 12.9-inch screen model that would be Apple’s larger iPad to date. The smaller tablet would be the next iteration in the iPad Mini line, with the larger iPad variously rumored to be the next iPad Air or something called an iPad Pro or iPad Plus.

3. OS X Yosemite Is Expected to Get Some Stage Time at Apple’s Event

Check out the video above to see five reasons to use iCloud Drive.

While OS X Yosemite got a preview earlier this year at WWDC, Yosemite won’t be getting a public release until sometime in October. Apple is expected to reveal the Yosemite public release date at the event, and spend some time highlighting the new features of Yosemite. iOS 8 and Yosemite are designed to work together, with one of the coolest features being Handoff. In Handoff, you can start a document on your iOS 8 device and finish it on your Mac running Yosemite.

4. Apple Just Set a Sales Record With the iPhone 6

According to MacRumors, a combined 10 million iPhone 6 and 6 Plus units were sold over Apple’s opening sales weekend. That’s one million more units than Apple sold last year when the iPhone 5s and 5c hit store shelves.

Sales for the last round of iPads were slightly under analyst projections, but Tim Cook called those shortfalls “a speed bump” on the company’s road to success.

5. The October 21 Apple Event Might Also Feature the Apple TV

Check out the video above to see how Markup can save you a ton of time in Mail.

According to BGR, there’s a chance that Apple’s upcoming iPad event could also feature some other Apple products. The iMac, MacBook, and Apple TV line might all get a refresh and be featured at the iPad event. If they don’t make an appearance, however, you can expect to see at least the iMac and MacBook refreshes early in 2015. 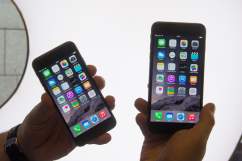