Which digital payment platform is best? We pit Apple Pay vs. Google Wallet when it comes to security, supported devices, and partners. Apple Pay is available to all iPhone 6 users, as well as future Apple Watch owners. Google Wallet works on a wider array of phones. Read on to see how they stack up against each other.

Google Wallet is supported on far more smartphones than Apple Pay. Apple Pay will launch in October. At the iPad launch event on October 16, Tim Cook revealed that Apple Pay will launch on Monday, October 20. For now, it only works with the iPhone 6, 6 Plus, and Apple Watch, the latter of which won’t launch until next year.

In contrast, the Google Wallet app is available on all Android phones (Gingerbread v2.3+) and iPhones (iOS v6.0+). Google Wallet tap-to-pay is supported on select Android devices. So when it comes to the best, most diverse smartphone compatibility, Google Wallet has got Apple Pay beat.

According to Greenbot, “Android Wear doesn’t yet have a built-in mobile payments system.” Apple Watch will support Apple Pay, but that watch won’t even hit store until next year. By then, Android Wear smartwatches may have Google Wallet support. However, that is certainly not guaranteed.

Here’s what Apple has to say about the security of Apple Pay:

“With Apple Pay, instead of using your actual credit and debit card numbers when you add your card, a unique Device Account Number is assigned, encrypted and securely stored in the Secure Element, a dedicated chip in iPhone and Apple Watch. These numbers are never stored on Apple servers. And when you make a purchase, the Device Account Number alongside a transaction-specific dynamic security code is used to process your payment. So your actual credit or debit card numbers are never shared with merchants or transmitted with payment.” 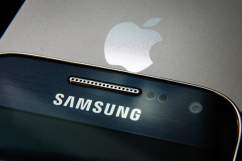 Apple has partnered with a number of banks and credit card companies to ensure that Apple Pay will be accepted in a lot of different locations. These partners include Visa, Mastercard, American Express, Wells Fargo, Citibank, Bank of America, Capital One, and Chase. Apple Pay is accepted at 220,000 stores nationwide, including McDonald’s, Subway, Whole Foods, Staples, and Petco. Apple Pay can be used to complete purchases in apps like Sephora, Groupon, and Uber.

Google Wallet has a Wallet Card option that lets you shop at millions of locations where MasterCard is accepted. If you don’t want to have another card in your wallet, you can use Google Wallet (sans card) to “pay anywhere contactless payments are accepted, which includes hundreds of thousands of merchant locations in the United States.” A list of places that accept Google Wallet can be viewed here. Highlights include Hilton, GNC, Quizno’s, and Rue La La. You can also use Google Wallet to buy things from Google websites, such as Google Play or YouTube.

Apple Pay has taken a big hit, however. Both Best Buy and Wal-Mart recently pulled out of their planned partnership with Apple Pay. Instead, these two companies will back Merchant Customer Exchange, or MCX.

Both of these payment platforms are still in their infancy, and both have a long way to go before they are widespread and totally perfected. Google Wallet has the benefit of being cross-platform, but Apple Pay has the benefit of wearable support (or at least, it will once the Apple Watch finally hits stores next year).

However, Apple Pay is available on a small number of devices that will allow for mobile “tap-to-pay” transactions. Don’t be surprised if you find yourself juggling both digital payment options for a few years to come, particularly if you use an iPhone. It’s not clear whether Apple Pay vs. Google Wallet will be a situation like Betamax vs. VHS, where there is a clear winner and loser. In all likelihood, both payment options will have enough interest to stay active and relevant for years to come.