What’s the better smartphone for your needs: the iPhone 6 or the Galaxy S5? Check out an in-depth comparison in the video above to see how these phones stack up, or read on to see our comparison of the most important features of these flagship smartphones. Whether you’re looking to switch into a new smartphone ecosystem, or just looking to confirm that your favorite smartphone really is top dog, you’ll find this guide informative and interesting.

The video above includes over 50 tips and tricks for getting the most out of your S5.

The pricing of the iPhone 6 is kind of a complicated issue, and one we’ve explored more fully in our article on iPhone 6 pricing. That being said, here’s a rundown of the essential info about the iPhone 6’s price across different carriers.

AT&T Next lets you buy iPhone 6 for as low as $0 down and from $27.05 per month, while Sprint has a new iPhone for Life program where you’ll get a new iPhone ever two years and pay $70 a month. Verizon is offering an iPhone 6 for free to customers who trade in their old iPhone and sign up for a new two-year contract.

A quick search on Amazon shows that you can get a Samsung Galaxy S5 for between $0 and $80 with contract, or about $600 off-contract. You can see all of Amazon’s on-contract and off-contract prices for the Galaxy S5 right here. It’s possible that Samsung will further reduce prices of the Samsung Galaxy S5 and/or the Note 4 in order to incentivize shoppers even more. It will depend on how well the iPhone 6 sells, and it sold over 4 million units during the initial preorder rush, and a total of ten million units over release day weekend.

Check out a hands-on look at the Gear 2 smartwatch in the video above. The Gear 2 is one of many Samsung smartwatches that is compatible with the Galaxy S5. Other wearable accessories that you might want to use with the S5 include the Samsung Gear Live and the Gear S. Samsung also makes a wide array of cases, earbuds, and other mobile accessories to pair with your S5.

Apple also makes a number of cases and accessories to go with your iPhone 6. The accessory that most iPhone 6 fans are most interested in is the Apple Watch, which will cost more than most comparable Samsung wearables at $349 (or more for premium models). The Apple Watch looks pretty cool, but iPhone 6 fans won’t have a chance to try it out until it launches early next year.

In the case of both phones, you aren’t strictly limited to using the accessories used by the manufacturer. That being said, a lot of smartphone owners like the security of buying accessories from the same company that makes the phone itself.

Ever wondered what kind of protection an official Apple case provides? Check out the video above to see how an Apple-made case stacks up, and decide whether you want to get a third-party case or one of Apple’s special cases. The video features both the iPhone 6 silicon case and leather case options from Apple.

Bigger isn’t always better. Whether you find the screen size of the iPhone 6 or the S5 more appealing will depend on a number of factors, including the size of your hands, and whether you prefer to use your phone with one hand or two hands. You might want to visit a store that stocks both phones so you can hold them in your hand and see which feels most comfortable to you.

In the video above from GottaBeMobile, you can see a whole host of tricks and tips for getting the most out of your Samsung Galaxy S5.

The iPhone 6 has a 8MP camera, true-tone flash, 1.5 micron pixels, and a f/2.2 aperture. The phase-detection auto-focus used in both the iPhone 6 and 6 Plus means you can take photos fast, and with the same technology found in professional DSLR camera. 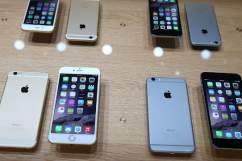 Despite coming out months apart and being made by two different companies, these two phones are fairly comparable in a couple of key areas. If you own other Apple products or Samsung products, those previous purchases are likely to influence your next smartphone purchase. That being said, iOS is unquestionably the more secure of the two phone operating systems. Both of these flagship phones have their points of superiority, but for people who are already entrenched in one mobile ecosystem, it’s difficult to think about changing to a new OS.

Looking for a more humorous take on the differences between these two flagship smartphones? The iPhone 6 and Samsung Galaxy S5 both get equally mocked in this hilarious comparison chart from The Onion. It really highlights the fact that both phablet/smartphone options aren’t all that different, except perhaps in terms of how their respective user bases are perceived by the public.

You can buy an iPhone 6 here.

You can buy a Samsung Galaxy S5 here.

Whether you’re all about the iPhone, or a die-hard Samsung fan, we can help you find the best case for your new smartphone. Check out our Samsung Galaxy S5 case recommendations, or review our list of deluxe iPhone 6 cases.

Read More
Android, Apple, Samsung, Shopping, Smartphones, Technology
wpDiscuz
20
0
Would love your thoughts, please comment.x
()
x
| Reply
We compare the iPhone 6 vs. Galaxy S5. Which smartphone comes out on top? Read on to find out.