Without question, the most hotly anticipated iPhone 6 accessory is the Apple Watch. But since that won’t be hitting store shelves anytime soon, we’ve rounded up five other must-have accessories that every iPhone 6 owner should check out.

Get a closer look at this watch in the video above.

The worst part about owning an iPhone 6 is the long wait between the iPhone 6’s release and the release of the Apple Watch. With a release date of “early 2015,” it could be months before you can buy an Apple Watch.

If you’re looking for a smartwatch to use between now and the Apple Watch launch, then you’ll love the Pebble’s elegant lines and customizable faces. Plus, the Pebble syncs with a ton of apps you probably already use. The Pebble makes a gift because it strides the line between fashion and functionality.

Automatic is the best iPhone accessory you’ve never heard of. This little box syncs with both your iPhone and your car’s onboard computer system, allowing you unprecedented access to your car’s driving information. Automatic can help you save money on gas by analyzing your driving habits. Additionally, Automatic can help diagnose what your “check engine” light means.

This case idea is so clever, and will definitely appeal to runners and gym rats. The case itself can be attached to a separate armband, allowing you to go from the office to a spin class without having to take your phone out of its case. While the color options and size options are limited, this case will be ideal for the average iPhone 6 user who loves listening to music while they do some cardio. 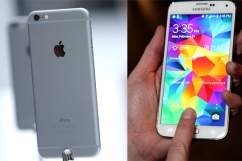 See how the Jawbone Up stacks up against the Fitbit Flex in the video above.

The Apple Watch looks cool, and it should have some nice fitness features. That being said, Apple doesn’t really have anything like a slim fitness band in its product pipeline. If a band is more your style than a full-on smartwatch, the Jawbone UP might be what you’re looking for. There are a lot of fitness tracking wristbands out there, but the Jawbone UP has gotten top marks in a lot of device comparisons. It also has a sleeker look than many other fitness bands.

The UP has a long-lasting battery, and can be beneficial even for people who aren’t actively trying to lose weight. Because it tracks your sleep cycles, the UP can wake you at just the perfect moment in your sleep cycle, allowing you to feel refreshed. 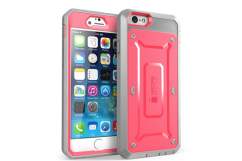 A few other companies have tried to blend the world of fashion and wearables, but few have done it with the skill of Ringly. The Ringly device is a beautiful ring that syncs with your smartphone. The ring buzzes with a subtle vibration to alert you to texts, calls, tweets, or push notifications from select apps. The ring is customizable, and lets you choose from four programmable vibration patterns.