iOS 8 is causing all kinds of headaches for iPhone 6 users, so it’s no wonder somebody decided to shoot one of these new phones with a 50 caliber bullet. Check out the video above to see a rifle tear through an iPhone 6 Plus.

The impulse to put a big bullet into a shiny new iPhone 6 isn’t unusual. Almost since launch, a large number of iPhone 6 users (and people with older iPhones running iOS 8) have wanted to break their phones out of frustration. Common iOS 8 issues include crashes, connectivity issues, and severe battery drain. There are some tips you can try to fix the battery drain issue in iOS 8.

Curious about how a different iPhone stands up against a bullet? Check out the video above, which features an iPhone 5S getting shot with 50 caliber sniper rifle while the shooter uses Google Glass. If you can’t shoot your own iPhone, watching this video is a great way to blow off some steam while you try to fix your buggy device.

While nobody expected the new iPhones to be bulletproof, users expected that such an expensive smartphone would at least be sturdy enough to resist bending when stored in a front pants pocket. Unfortunately, the iPhone 6 appears to have a bending problem, and that problem can’t necessarily be fixed by putting your phone in a case.

Apple did push an update for iOS 8, but quickly pulled iOS 8.0.1 after it was clear that the update was causing more problems. Apple is expected to release iOS 8.0.2 within the next few days. Until then, the videos above may be your best way of staying sane in the face of an increasingly buggy operating system. 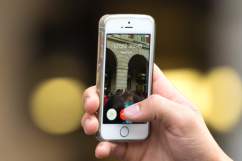 When Will Apple Release the Next iOS 8 Update?