Check out these videos to see if #Hairgate is a legit problem with the iPhone 6, or something that’s been totally blown out of proportion. In the video above from Mashable, Christina Warren argues that Hairgate is simply not a real problem iPhone 6 owners need to worry about. You can watch both men and women try to get their hair caught in the iPhone 6 in the video above.

Hairgate started after a user posted on 9to5Mac. Here is the post that started it all:

“My iPhone 6 Plus…keeps yanking out my my hair when I’m making call. Initially I thought it was the hair sticking to the screen protector. But upon closer inspection, it was the seam between the glass and aluminium– hair gets stuck and when you try to free it out, it hurts. I believe it’s not only me.” 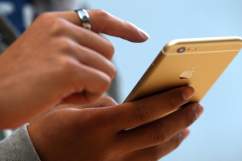 iPhone 6 #Hairgate Test! (iPhone 6 / 6 plus are Ripping Out People's Hair)Galaxy Note 4 tricks! youtu.be/W-kaOjfAZyQ iPhone 6 (Space Grey) goo.gl/BKBDqJ 15 reasons not to buy an iPhone 6! youtu.be/_Ik_4fZ2Dzs After #bendgate, here comes #hairgate. There is a microscopic gap in b/t the aluminium enclosure & the glass of the iPhone 6 & iPhone 6 Plus which is allegedly catching hair and beard from people's head…2014-10-06T22:03:37Z

Here’s another Hairgate test video for comparison. In the video above, Gadgets Portal tests the Hairgate controversy, and does catch a hair in the phone. However, it did take multiple attempts. This is not the only visual evidence of this problem, as you can see in the tweet below:

#hairgate is real- sort of. This is from my beard on my iPhone 6. I will say that it took several swipes. #ouch pic.twitter.com/rhlPqw4k5s

Hairgate comes hot on the heels of “Bendgate,” a pretty nasty PR hit against Apple. Several iPhone 6 users claimed their new phones had bent during normal use. While the problem is not as widespread as it was originally thought, this problem still got a lot of press.

One user on the MacRumors forum stated that bending occurred within just 18 hours of having a phone mostly in their pocket while driving to a wedding and attending the ceremony and reception. Check out the video below to see how badly the iPhone 6 has been bent after people put it in their pockets.

Read More
Apple, iPhone, iPhone 6, iPhone 6 Plus, Smartphones, Videos
Check out these videos to see if #Hairgate is a legit problem with the iPhone 6, or totally overblown.