On Christmas Eve, many parents plan on showing their kids the International Space Station up in the sky, and calling it “Santa’s Sleigh.” While the ISS won’t be easily visible from all locations on Earth, some residents of the Northern Hemisphere will have front row seats for watching “Santa” fly across the sky. Here’s a guide to watching the ISS (aka Santa’s Sleigh) on Christmas Eve 2014.

Check out a new Christmas greeting from the crew of the ISS in the player above.

Not every person on the planet will get the same look at the ISS tonight. If you live in the UK, you will have the best possible view. According to Metro, “Those who live in southern Britain will get the best view of the space station (ISS) at 5.22pm for approximately three minutes.” Depending on your location in Britain, the ISS will be visible between 30 and 55 degrees above the horizon. You can also visit NASA’s Spot the Station site to see upcoming opportunities to see the ISS in the sky.

2. Catch the ISS on a Second Pass

According to the Telegraph, some residents of the UK may be in a position to see “Santa’s Sleigh” for a second time on Christmas Eve:

“Those in the South may also be able to catch a fleeting second glimpse when it passes by again just before 7pm. This will be much harder to see, however, with the second flyover appearing far lower in the sky – just 11 degrees above the horizon from London, or about the height of a first on an outstretched arm.”

If your kid is too old to believe in Santa, but still passionate about NASA and space travel, you can check out the High Definition Earth Viewing (HDEV) experiment aboard the ISS. It is livestreamed here. If the feed is black, it means that the ISS is on the “night” side of the Earth. 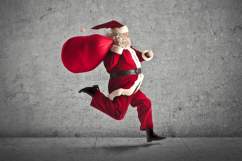