The Samsung Galaxy S5 debuted earlier this year, and Samsung is already hard at work on the next version of this flagship smartphone. Alleged Samsung Galaxy S6 specs have leaked online. The S6, also being referred to under the code name “Project Zero,” is expected to be a significant step up from the S5.

9to5Google reports that specs for what might be the S6 prototype have leaked. Here are the specs about this Android L device from 9to5Google’s report:

As we reported previously, earlier rumors about Project Zero suggested that we could expect a 20MP camera and a 4K display from this upcoming phone. Based on past release windows for the Galaxy S line of phones, it is possible that the S6 will debut at Mobile World Congress 2015. This year’s MWC runs from March 2 to March 5. However, it is also possible that Samsung will debut the phone at an Unpacked event held in the months after MWC. Expect to see the S6 (or whatever Samsung decides to call this phone) sometime in the spring of 2014, likely in March or April. 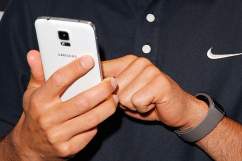