The new year has begun, which means a fresh batch of content has hit the Google Play store. Among the must entertaining game genres offered to Android device users has to be the arcade releases. This month, we’re going to introduce you to five awesome games that provide quick thrills and plenty of fun for the road. These are the five best Android arcade games of January 2015 that you most definitely need to add to your download queue.

SNK fans hold the Metal Slug series close to their hearts. One of the best entries in the long running shoot ’em up series is the 3rd iteration. This perfect port of the classic arcade game hits Android devices and comes with some excellent touchscreen controls. The explosive running and gunning, hard as nails boss fights and extensive options of weaponry makes this mobile version of Metal Slug 3 worth revisiting.

Billy is a fisherman who’s looking to seek redemption. The only way for him to find it is by doing something incredible – become a fishing master by recovering an endless amount of sea creatures and blow them sky high! Ridiculous Fishing is an infinitely replayable arcade fishing game that’s jam packed with hours of fish retrieving across several awesome looking stages. Select your bait, pick up some fish and shoot ’em in the sky.

3. SpongeBob: Sponge on the Run

The live action SpongeBob movie that’s hitting theaters in February should keep your lil’ ones happy. This mobile endless runner has been released before the film’s release and it’s instantly entertaining for fans, young and old. Sponge on the Run puts everyone’s favorite talking Sponge on an endless road in Bikini Bottom and pick up as many coins as you can. Don’t forget to dodge those obstacles and make sure you pick up those powerups for extra SpongeBob madness.

Fun Run 2 arrives with new characters, new stages and new gear for this multiplayer arcade racer. The cutesy critters seen in this mobile game get blown to bits and show off some extreme bodily harm as you try to rush them to the finish line. You’ll have to use your wits and twitch reflexes as you dodge obstacles, zip past other online players and collect new swag for your playable critters.

This arcade stacking game is full of wonderful sheep that you can tower into the sky. All you’ll need is one finger as you release swinging sheep, place them atop each other and get them as high as you can. The difficulty certainly ratchets up pretty quickly as your sheep start to sway, but great players will be able to balance their wooly tower perfectly and keep getting higher. 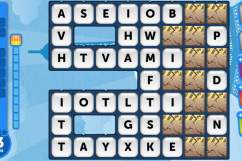