Adding a solid state hard drive is one of the beefiest upgrades you can give a laptop or desktop. You don’t have to buy the best SSD for your laptop to get the benefits either, as even the most budget SSD runs faster than a HDD.

These tiny 2.5 inch drives are easy to install in most laptop cases, and can easily be adapted to a 3.5 inch desktop drive bay as well. Installing one in your machine means reduced power consumption, better read/write speeds, a lighter and cooler machine, plus ever-important stability.

It is important to note all the different benefits that come from SSDs, as you can’t simply choose a drive by whichever has the fastest sequential read/write speed. In terms of speed, it is better to go by random read/write speeds anyway since that is a more realistic use, but each drive has its strengths and weaknesses.

That said, we’ve picked out five of the best SSD options for your laptop, each of which offers top performance and enterprise features at consumer prices. Read on below to browse our top picks. 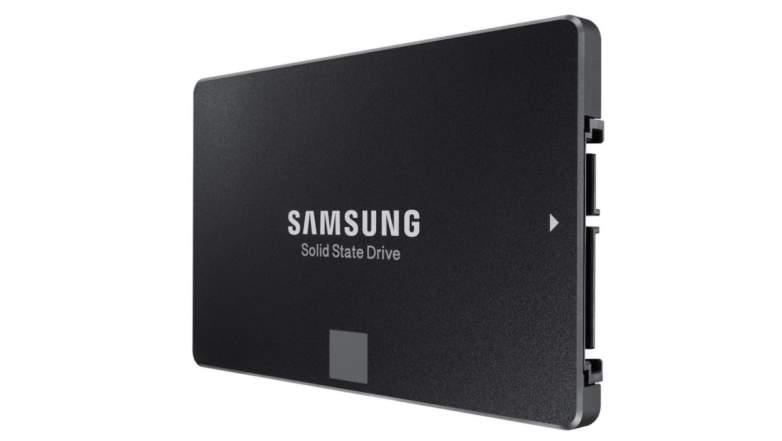 While the indisputable performance champion of the consumer SSD universe is the Samsung Pro, it is its little brother, the Samsung 850 EVO, that is garnered as the best value in an SSD. If budget is not an obstacle, the Pro is an easy pick for any type of machine, but most users will get more value out of the 850 EVO, a cheaper drive which has most of the same features.

For one, the 850 EVO shares its light and compact 7 mm form factor with its Pro counterpart, meaning it will easily fit into most all notebook cases as an upgrade. Both also come with Samsung’s Magician Utility, which will clone your old drive with ease.

Both drives also have AES 256-bit hardware encryption, which is the level of encryption required for information systems of banks and hospitals. Hardware encryption is invaluable when up against spyware, as it protects against malicious code and brute force attacks.

The big appeal of Samsung SSDs, though, is their innovative 3D V-NAND technology (vertical NAND), which increases drive longevity and write speed. Samsung employs a 3D memory configuration, meaning that rather than line their NAND flash memory cells flat along the surface of a silicon wafer in a typical manner, they stack them into 32 layers atop one another.

Again, this mechanically translates to a faster and more durable drive. Drives 250 GB and smaller are rated for a total 75 TB written before they crash, and those larger are rated for up to 150 TB. Both of these are numbers that will never be breached by 99% of SSD users, and one that stacks up well against the competition.

Samsung’s 3D V-NAND drives also consume about half the power of 2D NAND drives, meaning they can improve laptop battery life further than other SSDs, which according to Samsung can be by up to 50 minutes.

These speeds are only enhanced when enabling Samsung’s RAPID mode, which utilizes unused PC memory (DRAM) as a high-speed cache for improve performance. The drive’s automatically enabled TurboWrite also gives a remarkable boost beyond the capabilities of Samsung’s previous 840 EVO.

Short of missing an included spacer or mounting bracket, there is not much more you can ask for out of the 850 EVO. Is it the cheapest SSD out there? No. Is it a contender for best SSD for a laptop? Absolutely. 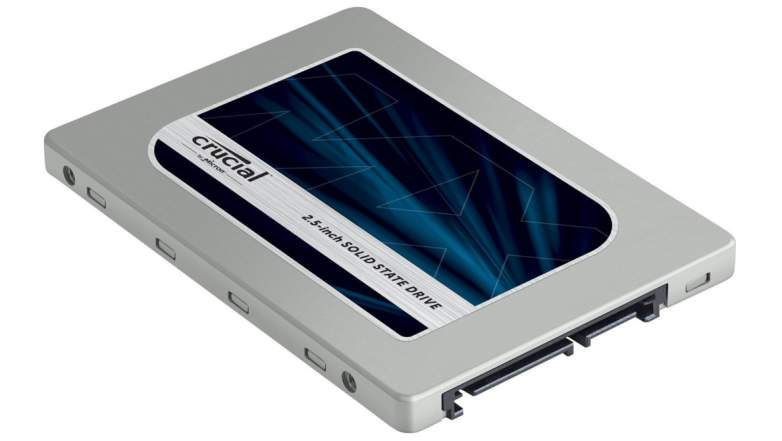 The Crucial MX200, successor to the wildly popular MX100, marks an upgrade across the board for Crucial SSDs. This 7 mm drive comes included with a 9.5 mm adapter bracket to fit in the place of a slim laptop HDD. More importantly, it sports several enterprise-grade data security features.

To start, the MX200 has one of the highest endurance ratings on this list, which means power users will be able to perform data-intensive tasks like video editing or data swapping without worry. Crucial’s 250 GB, 500 GB and 1 TB capacities have respective endurance ratings of 80 TB, 160 TB and 320 TB of data in one lifespan.

This longer life expectancy is good enough to offset our disappointment in the MX200’s measly 3 year warranty, but it is a shame considering that if Crucial supported a longer warranty on this product, it would be one of the most solid purchases in data storage.

The drive offers further fail-safing in their RAIN technology, which protects user data at the component level. RAIN disperses data on multiple storage components within the drive, making for a safe copy if one component fails.

Adaptive Thermal Protection technology is also utilized to automatically control storage component activity based on how much usage the drive is undergoing. This keeps the drive from overheating by only ramping the drive up to maximum power when needed.

The MX200 tops everything off with Power Loss Protection as well, which preserves user data if power is lost. But considering the high energy efficiency from SSD drives, losing power is expected to happen less often.

These high read/write speeds can be accredited to the drive’s Dynamic Write Acceleration, which allows it to switch between SLC (single-level cell) and MLC (multi-layer cell) modes depending how much data is streaming and where it is.

Crucial’s MX200, again, gives us just about anything we could think to ask for. The drive and the limited version of Acronis backup software that’s included make for a great deal. This is a serious contender for best SSD for a laptop. 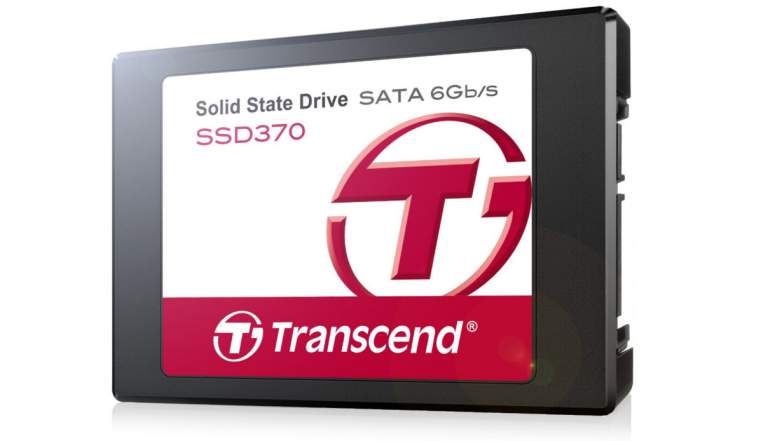 The Transcend SSD370, while definitely on the budget end of the SSD spectrum, proves with that it can compete with other top drives’ impressive specs.

This 2.5 inch drive makes for an easy upgrade, as it includes a 3.5 inch mounting kit, which would be used for upgrading a desktop. The drive is also an easy fit into a laptop at 7 mm thick, and it includes a cloning application in its included SSD Scope Utility.

The SSD370’s performance does not earn top numbers but is still plenty fast with a max sequential read speed of 570MB/s, and a max sequential write speed of 470MB/s. Its random read/write speed are notably lower than other models at 75,000 IOps, but this is still leagues faster than an average HDD, which would perform in the neighborhood of 170 IOps.

The SSD370 also promises decent longevity with its built-in wear-leveling and its Error Correction Code (ECC), both of which help keep the drive working reliably. While this is another drive that is hampered with a small 3 year warranty, its endurance measured in TBW scores quite well.

This alone would make the Transcend a more durable drive than the MX200, but the SSD370 loses points for not supporting certain encryption types out of the box. Its customized firmware does allow for encryption, however.

This drive also supports SATA Device Sleep Mode, an ultra-low power state that preserves battery life further. Given that all of these features come in at a price tag lower than the Samsung 850 EVO, this is a serious contender for anyone looking to make an awesomely budget PC upgrade. 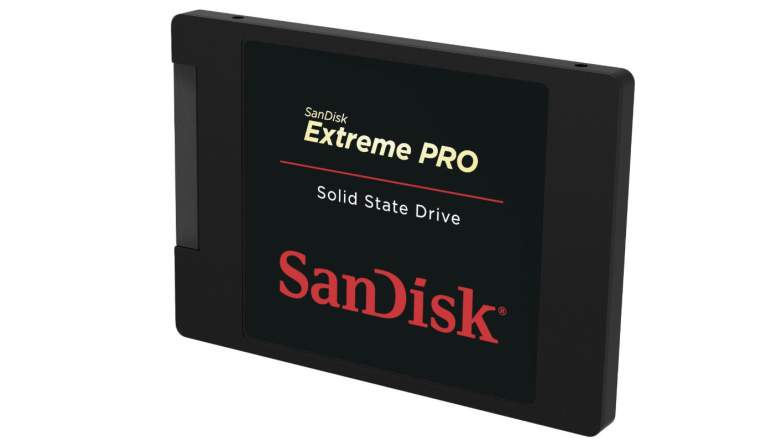 It’s tempting to say that the SanDisk Extreme PRO is not meant to be compared to the other hard drives on this list. And indeed, SanDisk’s less expensive Ultra II SSD is more closely marketed to average users.

However, because SanDisk makes the price difference to reach this next level of performance so minimal, we might as well focus on the perfectly affordable Extreme PRO SSD.

What does it mean to be the pro version? For starters, a 10 year limited warranty, which gives it a potentially longer lifespan. However, this may be one of the few SSDs whose warranty might be expected to outlast the drive’s physical endurance.

The SanDisk Extreme PRO has 80 TB of writing endurance, which will be enough for most, but video or photo editors might burn through that within the massive 10 year window they are given to do so.

But its the drive’s endurance does get an extra boost from its nCache Pro technology, which uses a write cache to consolidate small writes, in turn boosting random write performance and the long-term data endurance of the drive.

This is about the physical limitation of speed for SATA III, so you will often see sites teeter between calling this one or the Samsung Pro 850 the fastest. But the fact that this is closer to the price of EVO 850 than the PRO 850, while still reaching top speeds and including a 9.5 mm laptop spacer, makes this a competitive SSD as well.

The OCZ Arc 100 is one last budget option to consider, and while its inexpensive price can slightly hinder its performance, it still belongs with the heavy-hitters when it comes to features.

This drive is actually slimmer than 7 mm and can fit in the thinnest of notebooks. It does not come with any adapters either, which means a little extra work on your end, but should be no trouble with their cheapest drive starting about about $60.

The Arc 100 was intentionally designed to be a slightly slower drive, but speed is a fairly smart category for OCZ to cut its cost, as a difference of less than 100 MB/s does not mean much from the user perspective, yet the savings are significant. The highest volume Arc 100 gets up to 490MB/s read speed, and up to 450MB/s write speed. Its random read is a max of 75,000 IOps and its random write is a max of 80,000 IOps.

These speeds are really not far off from top marks, but that it does still leave a bit of a gap in the numbers race. Regardless, the Arc 100 still offers overall performance with other useful features.

I should note that the ARC 100 doesn’t support low-power states, so idle power consumption is high compared to competitor models, but this is again a necessary cost to cut to keep the Arc 100 affordable.

And likewise, the 3 year warranty could always be better, but we do get access to the OCZ Toolbox Utility found on their website. For power users, this drive will fall short on extra features, but for everyone else, the Arc 100 is a truly viable drive.

Read More
Gaming Accessories, Laptops, PC, Shopping
The price of top SSDs has dropped to a point where those who have been interested in upgrading have the perfect excuse to invest.