After giving us a sneak peek at the Apple Watch during the iPhone 6 launch event, Apple’s next keynote will focus on the company’s first-ever smartwatch. The event will be held at San Francisco’s Yerba Buena Center for the Arts on March 9. The keynote talk will kick off at 10 a.m. local time. The base model of the Apple Watch is expected to cost around $350, with more upscale versions of the watch costing in the thousands. The watches are expected to go on sale in April. As we explained in our Apple Watch price and release date post, the Apple Watch will work with the iPhone 6, iPhone 6 Plus, iPhone 5, iPhone 5C, and iPhone 5S.

The Apple Watch will have a touchscreen, but you can also use the watch’s “digital crown” as a scrolling or zooming navigation tool. The Apple Watch will have health and fitness features, as well as a Pinterest app, a BMW app, an MLB app for checking scores, and a Nike fitness app. The Apple Watch can be used to make payments through Apple Pay. The watch is expected to be water-resistant, but not fully waterproof. Despite that one major design drawback, Apple appears to be confident that they will sell millions of these smart watches.

9to5Mac obtained training documents from the Apple Store on how to sell the Apple Watch, and those documents indicate Apple isn’t anticipating having to make a hard sell to shoppers. Perhaps its not surprising that Apple has such high hopes for the smart watch. After all, Pebble’s latest Kickstarter campaign has raised over $16 million as of this writing, making it the most funded project in Kickstarter history. There’s clearly a market for premium wearables, though some tech insiders still wonder if the Apple Watch has enough features to warrant its premium price tag.

Apple’s Apple Watch event comes just days after the Mobile World Congress in Barcelona has concluded. This year’s MWC showcased smartwatches and wearables that will compete directly with the Apple Watch, including the new HTC Grip fitness tracker and the LG Urbane smartwatch, which you can see pictured in our MWC 2015 gallery. The Apple Watch will also compete against established smartwatches from Samsung, such as the Samsung Gear S or Galaxy Gear line.

Excited to see what Apple has in store on March 9? Apple’s live stream events are notoriously restricted and hard to watch. Here’s everything you need to know about watching Apple’s smartwatch keynote on desktop, mobile devices, or set top boxes.

1. How to Watch Apple Watch Live Stream on Desktop

Click here to visit Apple’s Live event website, where you can watch the keynote speech. The keynote begins at 10 a.m., Pacific Time. Do note, however, that some browsers will be incompatible with the Apple live stream. Due to Apple’s restrictions on the live stream, only those users who are using the Safari browser can see the live stream. Additionally, those users must be using Safari on a computer running OS X. The Apple Watch live stream page states very clearly that “Live streaming video requires Safari 5.1.10 or later on OS X v10.6.8 or later” for those who wish to enjoy the event. That being said, we have heard that some Windows machines with Quicktime 7 installed have been able to enjoy past Apple live stream events.

We recommend that, at least one day prior to the event, you upgrade to the latest version of Safari and OS X currently supported by your computer. This will give you ample time to download and install the upgrade. Nobody wants to be scrambling at the last minute to download an upgrade just before the live stream is scheduled to begin.

Apple’s restrictions on watching the live stream have always been a bit puzzling, even to Apple fans. One would think that Apple would want to make it as easy to possible to watch their live streams, since they’re a great way to get people excited about new products. By making it hard for people on Android or Windows devices to watch Apple’s keynote events, it seems like Apple is limiting the exposure of their products.

2. How to Watch Apple Watch Live Stream on Mobile Devices

You will need an iOS device to watch the Apple Watch live stream online. Additionally, you will not be able to use a mobile browser that isn’t Safari. The live stream requires you to use Safari on a mobile device running at least iOS 6.0. On any mobile device running iOS, you can simply point your Safari browser to this link. The video should begin to play automatically after the event has gotten underway. Sorry Android and Windows phone folks, but Apple isn’t making it easy for you guys to tune in.

If you own an Apple TV set-top box, you can watch Apple’s Keynote live. Select the “Apple Events” channel from the main menu to watch. Apple tends to remove the Apple Events channel from the Apple TV menu in between live stream events. If you don’t see the Apple Events channel on your Apple TV, don’t panic. It will likely be available right before the March 9 event, probably on Sunday or early Monday morning. Watching via the Apple TV is a great way to enjoy the live stream on a big screen. Plus, it frees up your laptop or tablet to view live blogs or Twitter feeds related to the event. You can also use this channel to watch past live stream events, which can be a fun stroll down memory lane.

Make sure that if you have any updates to install on your Apple TV, you start the update process well before the Apple Watch event is scheduled to begin. It would be sad if you missed the start of the event because of a slow update process. Please note that Apple’s smartwatch event restrictions state that you must have a second- or third-generation Apple TV with software 6.2 or later. Older Apple TV devices, or those with outdated software, will not be able to view the event. 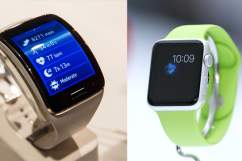 We always recommend that you have a live blog running in a separate window whenever you try to watch an Apple live stream event. Remember when the iPhone 6 live stream got completely screwed up, both visually and audibly? Having live blog coverage open in another tab (or even on another device) is great insurance against another Apple live stream meltdown. Even if the next Apple keynote live stream gets screwed up, you won’t miss a minute of the event. Another reason we recommend following a live blog is in case you want to quickly double-check something a keynote speaker just said, such as price, release date, or device specifications.

One of the best resources for detailed live blogging for the Apple Watch event will be CNET. You can check out their live blog here, which will start one hour before the event. You can also check out live blogs from the Verge or TechCrunch.