The month of March 2015 has been very generous and beneficial for the Google Play store. A good number of great mobile games have flooded the online app service and blessed Android device owners with an abundance of great time wasters. We’ve taken our time to play through most of the better ones, which is why we have arrived with this top five listing of the very best. These are the top five best Android games of March 2015.

The horrifying animatronics of the Five Night at Freddy’s series have returned. The infamous Freddy Fazbear’s Pizza has been closed for 30 years now. The owners of Fazbear’s Fright: The Horror Attraction got the (horrible) idea to bring in one of those past killer bots from the closed down pizzeria. And…SURPRISE, SURPRISE! Things go badly during the evening hours. Once again, you’ll check out camera footage of each room and prepare for the worst. This 3rd main entry is just as good as the previous two games, so you’l have a scary good time once again.

Regular Show is one of those animated shows that is too trippy to explain. Just watch it, fall in love with it and understand the hype. An original mobile game based on the cartoon’s extreme sport is out now and it’s a huge joy to take for a spin. You’ll put three chosen members from the hit shot to work on a field against three other players. This dodegball-like sport gets even crazier as you use power-ups and super abilities to knock out teh competition. The single-player is packed with tons of great stages, plus the same screen multiplayer operates even better on tablet devices.

The universe is filled with an endless gathering of stars, planets and the unknown. On your mobile Android device, the galaxy happens to offer gamers a part of 8-bit bounty hunters. You’ll have to create a part of the best of the best as you hunt down fugitives for profit. Each of the dungeons you step into are procedurally generated, so no past experience should be played through twice. The mixing and matching of bounty hunters will bring out the hardcore strategist in mobile gamers. You’ll feel compelled to play this strategy RPG on a daily basis. Trust us on that one.

Combo Queen is the type of mobile game that members of the fighting game community will fall in love with. That counts for everyone else, this 8-bit battler will grab you just as much as it grabs that sub-category of gamers. This title combines the infinite runner mechanics of the best games in the genre and the combo/parry system of games of its ilk. Your Queen encounters tons of varying foes and engages with them in fun tap/hold controlled battles. The fights look flashy and there’s an endless amount of cool content to grab onto. Take on all of Combo Queen’s dungeons and fend off anyone and everyone that stands in your way.

Spring Ninja has a simple concept – keep your overweight ninja alive by tapping the screen and bouncing him to platforms. Sounds easy, but it’s pretty damn impossible to get a score close to or higher than 10. That shouldn’t scare you away, though. Spring Ninja is a fun arcade platformer that easy to play, yet hard to truly excel at. Keep your ninja safe, put those springs to good use, time your released leaps appropriately and try to nab that high score. Your heart will drop countless times when you fall to your death, but you’ll feel incredible when you land on hard-to-reach platforms. 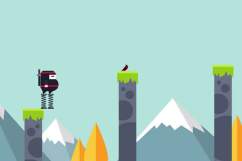 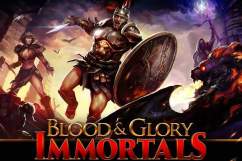