We have arrived with another dosage of quality Android mobile games. March 2015 gifted the Google Play store with a host of awesoem new games that you don’t have to pay a dime to download. Our best-of listing for this month features a fun top-down dungeon crawler, a Gold Rush simulation, a cartoony platformer and two addictive puzzlers. You’ll get the most fun out of these top five best new free Android games of March 2015.

Blood & Glory: Immortals ties in its action-heavy gameplay with the Gods tied to Roman history. You’ll maneuver through plenty of expansive stages with your chosen Gladiator, Warlock or Barbaress and slash through your adversaries. The combo-centric battles and quick levels makes this game perfect for players who may be in a bit of a rush. For those mobile gamers willing to put more time into it, the extensive character progression system and presence of player-controlled guilds makes this game a much deeper experience.

Anyone who actually paid attention during History Class has to have a clue about how crazy the Gold Rush was. The discovery of golden nuggets in Sacramento Valley convinced plenty of people to migrate and try to get rich back in 1848. Digging for gold is an activity that’s better experienced in video game form. Westbound: Gold Rush does just that by letting players construct their own boomtown. Your duty entails discovering gold and other assorted treasures while keeping your town and its denizens happy at all times.

As far as mobile platformers go, King of Thieves adds a cool wrinkle to its hop and bop gameplay. Players can create their own dungeons to keep their goods safe from other invading players. Your mini avatar will have to hop over obstacles, dodge incoming baddies and retrieve the treasure chests that hide within each of the 80 single-player stages. This game’s challenge is pretty high, so paying close attention to where you’ll run and jump is key here. Just make sure your own dungeon is well protected.

Angry Birds’ female stars get to take the spotlight once again. This time, they’ve moved away from their usual catapulting activities and headed into the world of bubble shooting puzzle games. Angry Birds Stella POP! is an easy game to play, but one of the hardest to put down once things really ratchet up. You’ll have access to different characters, cool power-ups, beautiful visuals and the always fun bubble popping you’ve come to enjoy. Make sure those piggies get freed and provide you with the bonus points you deserve. 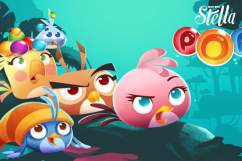 Mobile game developer Ketchapp are experts when it comes to putting out simple but supremely effective titles. Jelly Jump fits their criteria quite well. The main point of this game? Tapping on your screen helps your block of neon-colored goo get past closing platforms. You’ll want to keep your score high and getting to new records after you watch your block get sucked up by black oil on several occasions. The push for just one more game is a feeling you’ll encounter with this title. Time your jumps well enough and you’ll hit those double digit point limits. 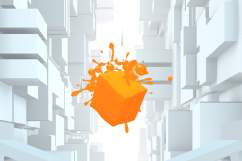