Learning a new language isn’t easy. It can take years of practice to become fluent and truly comfortable, but sometimes you need help faster than that. Whether it’s for travel or curiosity, being able to quickly translate a few phrases is extremely helpful. These apps make translating on the go extremely fast and easy and will help you bridge any communication gap. As with any computerized translation, these will not be completely accurate, and words taken out of context could end up having different meanings.

You may have used Google Translate through a browser, I know I did during my time in Spanish class, but now you can take it with you on your phone. With over 90 languages in the database, you should be able to travel almost anywhere and be able to make your way around. The app gives you four ways to enter in a word or phrase, the most obvious of which is typing it in. If you find yourself facing a word that has accents or symbols you can’t find in your basic phone keyboard, you can draw it in with your finger. A lot of times someone says a word to you and you have no idea how to spell it but you remember it, with Google you can speak the word into your microphone to the best of your ability and the app will find it for you. The last way is maybe the most useful, it actually allows you to take a photo of a sign or menu item and the app will identify the words and let you know that you’re heading the wrong way on a one-way street.

With a really stripped down interface, iTranslate is very easy to use. It consists of one menu where you choose form over 90 languages and then just plug in a word or phrase. You can then share the newly translated work in a text message, email or on Facebook so you won’t lose track of it. If you are worried about the pronunciation, the app will say it out loud for you. Sometimes spelling can be tricky so the app works to predict what you’re trying to type. This is the free version, but for $5 you can get the premium version and have the ability to use voice commands, get rid of ads and the ability to use longer texts. For quick phrases while traveling or a refresher while learning a language, the free version is perfect.

For people who study Chinese, Japanese and Korean, Waygo is perfect. Drawing a character is not easy to draw on a phone screen with your finger, so the app accounts for that by allowing you to take a photo of something you don’t understand. Switch the camera from horizontal to vertical to accommodate anything and use the built in flash to make translating in a dark restaurant better. You can also pull images from your photo library. It’s a good idea to save your translations because you only get 10 a month for free.

This app is quick and dirty. It is for the person who doesn’t want any frills, just a box to write in a word or phrase. It consists of two menus. One has two bubbles where you can choose a language from the company’s database. Type whatever you want translated in the top bubble, hit translate and it will appear in the bottom one. Press the squiggle in the middle to switch the languages. To see your search history, just go to the clock in the middle of the bottom menu ad you will see a list of everything you’ve done recently. It wouldn’t be 2015 if you couldn’t connect to your social media accounts, so log in with Twitter and Facebook and share your translations with your friends whether they like it or not. This is the free version, and it works just fine. If you want unlimited text to speech, a list of common phrases in various languages or to get rid of ads you can download iHandy Translator Pro for $1.99. 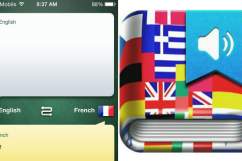 How to Use the iHandy Translator App

Voice Translator focuses on conversations. Record phrases or sentences and the app will translate them into whichever language you choose. From there you can share them with friends or file the translations away to look into later. If you find yourself face to face with someone who speaks a different language, you can pass the phone back and forth and have a conversation. The app will put the two language side by side so both parties know what’s going on. You can choose a phrase and see it translated into multiple languages at once. It’s the only app out there that allows for translated conversations.

Learn more about the Voice Translator app for Android here: 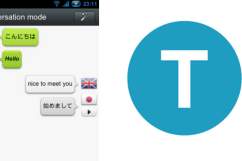 How to Use Voice Translator App