They cost a bit more than your average upright or canister vacuum, but many consumers are willing to pay more for the best robot vacuums. There’s a wide selection of products to choose from, including robot vacuums with HEPA filtration along with those designed for specific purposes. For example, some vacuums do an exceptional job of picking up pet hair while others are a breeze to pick up and transport. Many iRobot models are among the best-selling robot vacuum cleaners, but is it worth it to spring for the Dyson 360 Eye? We’ve taken a closer look at how these brands stack up.

If you’re in the market for a robot vacuum cleaner, performance is likely one of your top considerations. In a detailed preview of the Dyson 360 Eye robot vacuum, the appliance is described as having “more suction power than any other robot vacuum” currently on the Japanese market. The driving force behind the power is an innovative Dyson Digital Motor V2 — a, small, lightweight and super powerful motor. 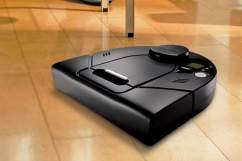 One of the most notable features of the Dyson 360 Eye robot is its 360° vision system, which gives the vacuum information about where it is, where it’s already been, and where it needs to clean. A panoramic lens acts as an eye to “see” around the room while a live vision camera makes navigation as precise as possible by telling the robot vacuum which parts of the room have the most features. It also comes with an app that lets you schedule cleaning sessions — and monitor the vacuum’s progress — even if you’re not home.

Many iRobot vacuums rely on iAdapt® Responsive Navigation Technology for deep, thorough cleaning. Optical and acoustic sensors are ideal for scooping up dirt — and super-concentrated cleaning. Some iRobot models use a wall-following technology that cleans up to wall edges while others have cliff-detection sensors that keep the vacuum from tumbling down the stairs. 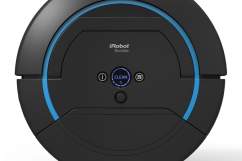 If your eye is naturally drawn to flashy silver gadgets, you’ll love the Dyson 360. It’s also a bit taller than most robot vacuums currently on the market. Dyson hopes that the extra height will give the vacuum better power when cleaning under large furniture such as tables and chairs. However, it remains to be seen if the extra height will hinder the 360’s ability to effectively clean nooks and crannies.

Many iRobot Roomba vacuums sport a similar appearance: sleek, black, and modern with a distinctive silver power button in the middle. While the Dyson 360 commands attention in a room, the iRobot is more likely to avoid the spotlight. Its relatively mundane looks are a hit among buyers who prefer an clean modern style. 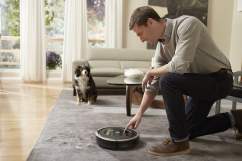 Dyson explains that the 360’s powerful performance cuts into its battery life. The fully charged vacuum has a 20-30 minute onboard battery run time before running out of juice. When it needs recharging, the 360 conveniently scoots itself back to its designated charging station.

In comparison, most iRobot vacuums — especially the Roomba series — have a generous battery life. Many can run for up to 60 minutes per cleaning mode, while some even complete several full cleaning sessions before needing a recharge. While the majority of iRobot Roomba vacuums find their way back to their designated charging stations, a few models need a lift.

Depending on the year and model, you can expect to pay between $300 and $800 for an iRobot Roomba vacuum. The iRobot Roomba 980, currently the most powerful and expensive Roomba on the market, has a price tag of $799. In comparison, the entry-level iRobot Roomba 650 is $299.

The Dyson 360 Eye robot vacuum comes with a much steeper price tag, with an MSRP of around $1,000. It’s pricey, but many Dyson fans are willing to shell out that amount of dough for an innovative and high-quality product like the 360. If the previews are any indication, though, the vacuum’s price seems fair given its wealth of features and superior performance.

Sign up here to get more info on the Dyson Eye 360. 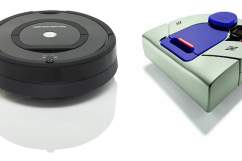 iRobot vs. Neato: Which Is the Best Robot Vacuum?

Read More
Gadgets, Shopping, Tech
wpDiscuz
3
0
Would love your thoughts, please comment.x
()
x
| Reply
Can't decide whether to splurge on a Dyson or iRobot? Let's take a closer look at how the two top robot vacuum manufacturers stack up.