The puzzle genre within the mobile gaming market is still thriving. For the month of May 2015, Google Play’s new selection of mobile games happens to feature a wealth of great puzzlers. We’ve arrived at our listing of the top five best new Android puzzle games that we’re sure you’ll appreciate. We have puzzlers that delve into RPG battle mechanics, your beloved animated characters’ adventures, saving astronauts and more. Make sure to spend countless hours looking down at your screen while you play these awesome mobile puzzlers.

Breakin’ down blocks is always a good time (’nuff respect to the respected OG of the genre, Tetris). Adopting this style of gameplay for a retro-stylized RPG format makes both activities’ fun factor that mush higher. Hunger Quest -Puzzle RPG- instills a sense of heroism and puzzle master wizardry into any players who masters it. As you embark on a grand journey full of little villages, powerful party members, epic monsters and dungeon crawling, you’ll do it while solving block breaking puzzles. This puzzle hybrid mobile game offers hours upon hours of RPG/block breaking gameplay.

Ice Age Avalanche – Official Game trailerJoin Sid, Manny, Diego and Scrat on a puzzle adventure to find hidden treasure! Slide fruit in any direction as you race to reach the treasure and compete against your favourite characters. Challenge your friends to match-3 "snowdowns" and rule the leaderboard! Available now on: iOS: gmlft.co/iOSAVA Android: gmlft.co/4wu0I Windows: gmlft.co/AvAW8 Windows Phone: gmlft.co/AvAWP Join…2015-05-20T12:30:01Z

A new animated film match-three puzzle game has hit Android devices. It happens to be based on the fun-loving Ice Age series, so the young ones and adults who wanna play it once they’re done will all enjoy Ice Age Avalanche. The objects you move, match and create big point combos with are plenty of sweet fruits. You’ll wander into all types of stages based in places like the Grasslands and Prehistoric Jungle. All the while, you’ll have to aid the film’s most poplar animals and crack plenty of puzzles, defeat bosses and put your boosters to good use.

Sunburn! – Android!Google Play: play.google.com/store/apps/details?id=com.noodlecake.sunburn Your ship is gone. Your crew is scattered. One option remains. Gather your crew… and jump into the sun. Reunite your shipmates and hurtle toward the end in 50+ distinctly dangerous gravity puzzles! ◇ — — — ◇ ◇ Juegos Rancheros: “A super promising debut.” ◇ Gamezebo: “4.5/5 Far from iterating, Secret…2015-05-14T16:42:42Z

The concept of Sunburn! is pretty damn hilarious – you and a crew of space faring astronauts get trapped in in…well, space after your ship explodes. It’s your duty to retrieve all of your fellow space allies, maneuver around neighboring planets and obstacles and not save them. That’s not a typo, folks. You read that right. Instead of getting them all together to go back to Earth in one piece, you gather them all up and force you and them right into the scorching embrace of the Sun. We had a lot of fun doing something so evil in Sunburn!

Cubix Challenge’s gameplay is quite simple – you’ll need to move a block around that features a lit center. That bright center must fall upon the designated center ground tile. You’re only provided with a limited number of rolls, so use as less moves as possible to complete your goal. The challenge rises up considerably, so you’ll want to stay active and rise to the occasion. All types of new stage factors pop up at later periods, which manages to freshen up the gameplay and throw you for a loop.

An island full of toys? Yeah, you’re already in with this one. Toy Island throws you into plenty of levels across a huge map setup. Your cute lil’ avatar has to navigate across tiles, avoid the negative embrace of other creatures and use every tool at hand to hop to victory. The bright and bubbly visuals will attract you and the fresh gameplay mechanics will be sure to keep you. Toy Island’s full of surprises, so prepare yourself for all the crazy stage layouts you come across. 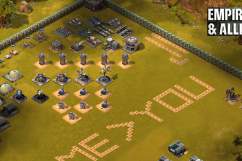