AT&T is facing a $100 million fine from the Federal Communications Commission for misleading its mobile customers about unlimited data plans.

The company “severely slowed down the data speeds for customers with unlimited data plans,” and “failed to adequately notify its customers that they could receive speeds slower than the normal network speeds AT&T advertised,” the FCC says in a press release.

“Consumers deserve to get what they pay for,” FCC Chairman Tom Wheeler said in a statement. “Broadband providers must be upfront and transparent about the services they provide. The FCC will not stand idly by while consumers are deceived by misleading marketing materials and insufficient disclosure.”

The fine is the largest in the history of the FCC.

1. The Slowdown Impacted Millions of Customers, the FCC Says

The FCC said in its press release that millions of customers were impacted by the slowdown. According to the FCC, “the Enforcement Bureau’s investigation revealed that millions of AT&T customers were affected. The customers who were subject to speed reductions were slowed for an average of 12 days per billing cycle, significantly impeding their ability to use common data applications such as GPS mapping or streaming video.

“Unlimited means unlimited,” said FCC Enforcement Bureau Chief Travis LeBlanc in a statement. “As today’s action demonstrates, the Commission is committed to holding accountable those broadband providers who fail to be fully transparent about data limits.”

The FCC found that AT&T’s notice about the unlimited data plan provided to customers wasn’t sufficient to allow them to make informed decisions about data plans. That violated the FCC’s Open Internet Transparency Rule, which was adopted in 2010 and went into effect in 2011. It “requires fixed and mobile broadband providers to publicly disclose sufficient and accurate information about the providers’ network management practices, performance, and commercial terms of their services, so that consumers can make informed choices when selecting and using Internet access services.”

2. AT&T Says it Will Fight the Fine & Did Nothing Wrong

A person on a cell phone walks past an AT&T Wireless store in New York City. (Getty)

AT&T said it will fight the fine.

AT&T said in a statement to the Washington Post:

The FCC has specifically identified this practice as a legitimate and reasonable way to manage network resources for the benefit of all customers, and has known for years that all of the major carriers use it. We have been fully transparent with our customers, providing notice in multiple ways and going well beyond the FCC’s disclosure requirements.

3. Thousands of Complaints Were Lodged With the FCC After AT&T Began the Slowdown Practice in 2011

People walk by an AT&T store in San Francisco. (Getty)

The FCC has received thousands of complaints from AT&T’s unlimited data plan customers, according to the press release.

The customers complaints stated “that they were surprised and felt misled by AT&T’s policy of intentionally reducing their speeds. Consumers also complained about being locked into a long-term AT&T contract, subject to early termination fees, for an unlimited data plan that wasn’t actually unlimited.”

AT&T is also fighting a lawsuit brought by the Federal Trade Commission over slow data speeds.

“AT&T promised its customers ‘unlimited’ data, and in many instances, it has failed to deliver on that promise,” FTC Chairwoman Edith Ramirez said in a statement. “The issue here is simple: ‘unlimited’ means unlimited.”

Also, AT&T was ordered by the FCC in October to pay customers $105 million to settle accusations that the company charged customers extra for bogus third-party services, like ringtone subscriptions and horoscope text messages, that they didn’t ask for, the Washington Post reported.

5. The Fine Comes as AT&T Fights to Get Approval for a Merger With DirecTV

The AT&T logo is seen atop a phone bill. (Getty)

On another front, AT&T is seeking approval from regulators for its $49 million deal to acquire DirectTV.

CNN Money reported earlier this month that officials from AT&T and DirecTV met with regulators about the deal. The deal is expected to close by the end of June. 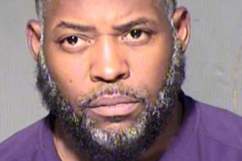