Fitbit is one of the leading names in fitness trackers, but a Fitbit isn’t always the perfect fitness solution for every person. The top-of-the-line Fitbit Surge Superwatch is a solid choice for athletic people who are looking for a fitness tracker with GPS built in. However, Polar’s M400 GPS Sports Watch & Activity Tracker is another option that appeals to people who need GPS in their sports watch. For the person who wants a rugged sports watch, either option could be perfect. If you’re a runner in the market for a new sports watch or fitness tracker, read on to see how these two powerhouse wearables compare.

A rear view of the Surge. (Fitbit)

For a lot of people, price is the most important factor when picking out a new gadget. A GPS sports watch or fitness tracker can be somewhat expensive, and you’ll want to make sure that you are getting the best value for your money. The Fitbit Surge retails for $249.95, with the Polar M400 retailing for exactly the same price. However, you’re more likely to find the Polar watch at a discount. At the time of this writing, the Polar M400 with heart rate monitor can be found online for between 27 and 32 percent off the list price. It’s worth pointing out that the version of the Polar M400 without a heart rate monitor retails for significantly less, at $199.95. No matter how you slice it, the edge in the price comparison goes to Polar, not Fitbit.

The Fitbit Surge and the Polar M400 have a lot of crossover in terms of core features. Both have GPS built in, and both can track your heart rate. The Polar watch is available in two colors, compared to the Fitbit Surge’s single option. However, the Surge is available in three sizes to ensure a nicer fit. As mentioned above, the Polar M400 is available with or without a heart rate tracking feature. This makes it a nice option for people who don’t care about a heart rate monitor, but still want a GPS tracker built in.

The Fitbit Surge tracks distance, pace, and elevation climbed. You can also review your total active minutes and calories burned. It’s also a tool that can help you get a fuller picture of your wellness, thanks to advanced sleep tracking features. It also pairs with your smartphone, allowing you to get both call and text notifications on the touchscreen display.

If you want the heart rate monitor feature in your training device, you can order an M400 with an included H7 Bluetooth heart rate monitor band. The M400 lets you sync and share your training with Polar Flow app. You can track your pace, distance and altitude with integrated GPS. Steps taken and calories burned are also monitored, and you can see how you progress towards your daily goals. An inactivity alert lets you know when you’ve been sedentary for too long, and encourages you to get up and move. The M400 can store up to 30 hours of past running data.

Battery life is an important part of any fitness tracker or sports watch purchase. You don’t want a device with poor battery life, because having the battery die in the middle of a run is no fun at all. The Fitbit Surge offers up to seven days of battery life.

In contrast, the Polar M400’s battery life can vary wildly based on how heavily you are using the GPS, which can run down the battery quickly. The battery operating time with GPS recording and heart rate monitoring activated is no more than eight hours. However, if you are just using the watch in “time mode” or tracking daily activity, the battery can last for about a month.

The Polar M400 is water-resistant to 100 feet. Fitbit’s website states that the Surge is sweat, rain and splash proof. However, the device is not swim proof. Fitbit also recommends taking the Surge off before showering, a recommendations that likely has something to do with Fitbit’s ongoing skin irritation complaints. 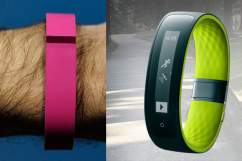 No discussion of the merits of the Fitbit line would be complete without talking about Fitbit’s recurring customer complaints about skin irritation. In 2014, Fitbit issued a voluntary recall of their Fitbit Force fitness tracker. The recall happened after a small number of Force owners reported rashes and contact dermatitis after wearing the tracker. This year, another round of the same type of complaints tarnished the Fitbit name. Fitbit blames the rashes on a variety of causes. Fitbit argues that people are wearing their bands too tightly, or that perhaps skin irritants like sweat and soap are being trapped under the band. Fitbit also recommends that you not wear the bands while showering. In most cases, the rash will go away after a few days. It’s entirely possible that any watch or fitness tracker could cause similar rashes after being worn improperly.

In short, the M400 is ideal for people who don’t mind wearing an around-the-chest HR monitor, and want a device with (potentially) longer battery life. It’s also a nice choice for people who really want a white fitness tracker. Key features here are water-resistant design for swimming, and an estimator tool to help you figure out when you will finish your workout. It may also be slightly cheaper, even with the HR monitor.

The Fitbit Surge is the right choice for people who want a wrist-integrated heart rate monitor, or those who need to get notifications during their workouts. The fact that it comes in three sizes (small, large, and XL) is a nice feature for those who have a hard time picking out a band that fits comfortably. It’s also got better sleep and alarm features than the Polar offering.

Want more Fitbit insights? Check out our post on the best Fitbit alternatives, peruse our favorite Fitbit accessories, or read our Fitbit comparison guide to help you make sure you’re buying the right Fitbit model for your needs. You can also check out our Fitness section for tons of advice on the best running shoes, apparel, and gear.