The brand new Parrot Bebop drone is the company’s latest, featuring a full 1080p onboard video camera which captures video at 30FPS and that can take stills at 14MP. There’s a lot to love about this little guy, which feels sort of like the underdog of the drone world.

The most notable thing about the Bebop drone out of the box is how well it flies and how well it responds to controls, at least when you’re up close and personal with it. Using a standard Android smartphone — in this case, I used my reliable Droid Maxx — you’re able to control the Parrot Bebop using Parrot’s FreeFlight 3 app (which can easily be found on Google Play and the Apple App Store). While the FreeFlight 3 app has some minor issues (including a delay in actually recognizing your drone at first), you’ll still be able to get your drone up and running in virtually no-time. We’ve basically put this app through the ringer for testing purposes, and the app held up without any crashes or freezes. Again, its biggest problem is the slight delay in recognizing the drone is actually connected. But, getting back to the controls, they’re incredibly responsive, and even if you’re an inexperienced drone pilot, you’ll likely get the hang of flying in no time. Especially if you’re a hardcore gamer, the Parrot Bebop drone is easy to control both indoor and outdoor. But I’ll also note that, unfortunately, the further away your drone gets from your phone, there becomes an apparent bit of lag in controlling it. When flying roughly 70 meters, I did begin to notice a change in the level of control I had over the drone.

The Bebop is incredibly easy to set up. The battery installation is much easier than it was with the AR Drone 2.0, with the connector attached to a small string that you simply pull it when you need to plug in the battery. There’s also a Velcro strap that holds the battery in place while flying, so that even when you crash, the battery doesn’t disconnect. Connecting the Bebop drone to your smartphone is a breeze, too, as you just have to connect to the drone’s onboard WiFi connection and then open the FreeFlight 3 app. There are a ton of settings you can tweak before flying too, including placing a max height and rotor speed to better control your drone, which especially comes in handy for new pilots working out the kinks of their drone flying skills.

The drone has a 1.2 mile range when using the skycontroller, but it’s nowhere near close to that when using your smartphone. The range using a smartphone to control it is roughly 100 meters from where the pilot stands, and when you’re out of range, the drone will hover by itself with a GPS signal so you can easily retrieve it. I also had my drone at a 20 meter height max (only because I was afraid that if I went any higher I might lose it).

The design of the Bebop drone is also notable for a couple of reasons. Aside from the fact that it looks great, and the camera is at the nose of the drone (as opposed to underneath it like many other drones), its color options are actually more useful than you would think. The fact that my drone was red, worked well in contrast to the mostly grassy areas I tested it around, as I could easily spot my drone from afar when I took the drone out of range. It’s also important to note that the materials that the Parrot Bebop is made out of make it incredibly durable. After crashing it at least twice, nothing was broken and the drone hardly had a scratch on it. And what’s more, the Bebop drone likely wouldn’t hurt anyone standing in its way, as the bumpers are foam, and the drone is pretty lightweight (although, I don’t recommend flying it into your friends).

The camera works generally well too, as it is able to take high-res snaps with ease and record high quality video. Parrot has created anti-vibration algorithms that help to rid any footage you capture of shaking created by the propellers or the wind around the drone. The video captured with the drone is impressively clear, especially when you’re close to what you’re filming. You’re also able to move the camera around without having to move the drone so that you can more easily get the right angle you’re trying to capture. It would be better if the camera were controlled by a third joystick or something, but using a two finger swipe, you can stop and change the viewpoint. As far as taking pictures is concerned, its fisheye lens allows for panoramic snaps, but the snaps aren’t as clear as they are with the DJI Phantom. Still, after spending a couple of weeks with the Parrot Bebop, it’s easy to see how amateur filmmakers could use it to capture their ideas. Moving the captured video files from the drone to your computer is done through a simple USB connection, and can be transferred directly to your phone using the FreeFlight 3 app (although, transferring such large files over WiFi can be a drag).

Of course, the biggest flaw of any drone is going to be its battery capacity and flight time. Unfortunately, we’re still stuck with flight times that are much lower than we would like them to be. The Bebop drone lasts for roughly 11 minutes in the air, although Parrot has packed two batteries into the retail packaging so that you can get 22 minutes right out of the box.

When you take the camera out of the equation, you’re still left with an incredibly fun to fly drone. We know it’s not a toy, and it probably shouldn’t be treated as such, but the fun factor has an undeniable level of important when buying a new drone. Because of its ease of use, small learning curve and great customization options for flight, the Parrot Bebop is quite impressive. If you’re looking to take up RC drones as a hobby, the Bebop is a strong candidate for your first drone.

The Parrot Bebop drone’s price point is its biggest selling point though, as its suggested retail price is $500 (and it can actually be purchased on Amazon for $464 as of writing this review). The price point makes it a perfect drone for entry-level filmmakers looking to expand on their current equipment or those looking to experience the joy of flight for a new hobby. It’s more compact than any of the DJI Phantom offerings, and it’s much less intimidating to fly, all for a much lower price tag than the Phantom. Overall, the Bebop drone feels like you’re annoying little brother: generally you like him, but he isn’t without his minor annoyances.

The Parrot Bebop Drone Can Be Purchased here. 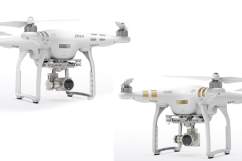 Read More
Drones, RC Drones, Review, Shopping
wpDiscuz
1
0
Would love your thoughts, please comment.x
()
x
| Reply
There's a lot to love about this little guy, and it's a great follow up to Parrot's AR Drone 2.0.