Not all drones are made equal. Some drones are intended solely for the purpose of being fun, while others are purposed for carrying a heavier load. There are tons of great RC drones specifically engineered for drone photography and shooting 4K video, though. So if you’re looking to record some great drone footage of you surfing, snowboarding, or anything else you might be doing, we’ve got you covered.

So without further ado, here are the top 3 best camera drones for drone photography:

The DJI Phantom 3 Professional has a 4K Ultra HD video camera that is second-to-none in the world of drone photography. It uses the DJI Pilot app for iOS and Android which allows for live viewing and complete camera control. The Phantom 3 Professional also uses Lightbridge digital streaming for live viewing of 720p video (with full resolution video being recorded to the micro SD card), and has a 3-axis gimbal for ultimate control of your drone footage.

The bundle comes with two DJI phantom 3 batteries, with each battery lasting around 22-25 minutes. Also notable about the Phantom 3 Professional is that is uses a Vision Positioning system so that it’ll fly smoothly indoors even without a GPS signal. At the price of $1,408, the DJI Phantom 3 Professional w/ 4K UHD Video Camera and an extra battery is the best camera drone you’re going to find for the money. 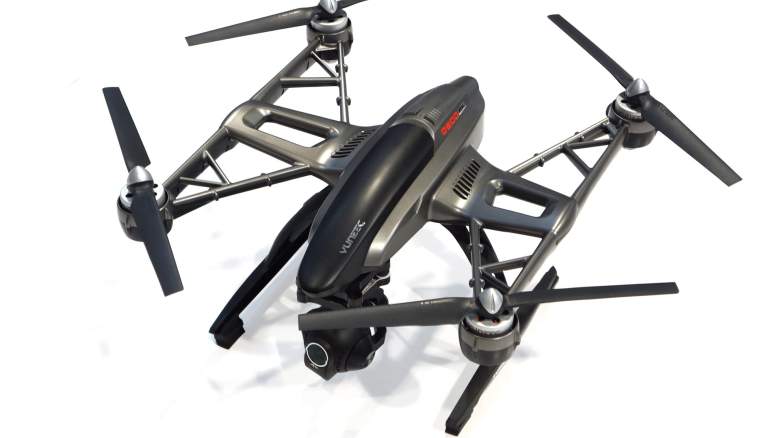 One of the underdogs of the drone photography world is Yuneec, who slowly but surely is on the tails of the success of DJI. Yuneec’s Q500 4K is their newest drone, and it allows users to capture photography and drone video in full 4K resolution. It comes with a 64GB micro SD card and an extra battery, as well as an extra set of propellers. It includes a CGO3 4K camera that is capable of capturing 1080p/120 fps slow motion video and 4K/30fps ultra high definition video. Users are able to control white balance and light exposure. It snaps 12 megapixel photos with a no-distortion lens, so your images come out clear. Yuneec has also included a handheld SteadyGrip for capturing video footage with the CGO3 4K without using the drone itself.

It has Watch me and Follow Me modes which allow for hands-free drone photography and video recording. With Watch Me, you simply set up the Typhoon’s position and it automatically gets amazing footage of your actions on the go. The Follow Me mode allows users to set the drone to follow them wherever they go to get footage. What’s more, footage from the drone is sent directly to the controller.

The Yuneec Q500 4K has a flight time of nearly 25 minutes, and even includes a car charger for on-the-go charging.

The best of the best camera drones to buy is the DJI Inspire 1. The DJI Inspire 1 uses two separate controllers — one for the drone itself, and another for someone else to use to control the camera. Ultimate control. It uses a 4K camera to record 4K video at 24-30fps. It also records 1080p at 60fps. The camera is 12MP.

The Inspire 1 can reach speeds up to almost 50 mph, and can stay in the air with a flight time of up to 18 minutes.

The Inspire 1 also has a few new features that have yet to be seen in any of the other drones to buy on the market, including a sonar positioning mechanism, 4K camera, and an optional dual controller system.

Read More About the DJI Inspire 1 Drone With Camera here.

Buy the DJI Inspire 1 Drone Everything You Need Kit here.

Read More
Drones, Shopping
wpDiscuz
6
0
Would love your thoughts, please comment.x
()
x
| Reply
Not all drones are made equally, as some of them are made specifically for the purpose of recording 4K videos.