There are many reasons why you might want to upgrade router. If you are still renting your networking equipment from your ISP in specific, it is never too late to eliminate that monthly fee by buying equipment of your own.

This is especially the case if you are currently paying for Gigabit internet, which won’t perform to its fullest potential unless your equipment is running on the latest wireless standard, 802.11ac. These AC routers also have a greater signal range, and are able to handle a higher throughput from multiple devices simultaneously.

All these factors considered, routers can be difficult to compare since so many adhere to the same set performance standards, but that’s why we’ve done the footwork of finding out which are the best AC routers of 2018.

Just don’t forget that your network is only as powerful as its weakest link, so before you go buy the best router available, make sure you have the best modem to match, and that your internet service will get you the speeds you are looking for.

What are the best AC routers? 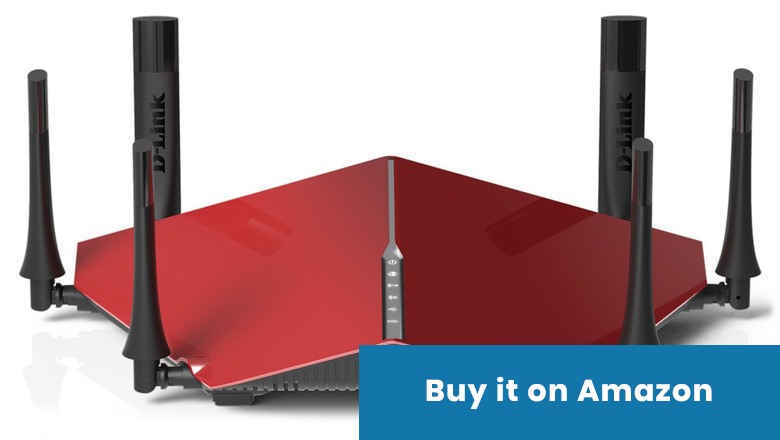 D-Link’s AC3200 is a networking behemoth — a router that does it all. And the only thing that prevents it from being the easy pick for anyone is the price. Unless you have specific streaming needs like gaming, 4K media streaming, or providing wireless for a multiple family household, the 1 GHz dual core processor and 6 high-performance antennas will probably be overkill.

If your networking needs are in the same neighborhood as D-Link’s router, you will have more power at your disposal than any ordinary wireless plan can support with a 3200Mpbs transfer speed (600N on 2.4GHz + 1300Mpbs + 1300Mpbs on 5GHz). The Tri-Band wireless configuration offers the flexibility of having three routers in one, distributing basic network tasks to the lower band, and reserving the higher band for priority tasks like streaming or gaming.

This router does does have a rather large footprint, but its sleek red design make it something you want on display. But because it performs so well, it can be easily tucked away into a corner of your space as well, since its Advanced AC Smart Beam can actually utilize the router’s antennas to eliminate dead spots in your house. Setup is a breeze and D-Link support is phenomenal with their phone support, and the only features advanced users will be missing is robust settings for their guest network. 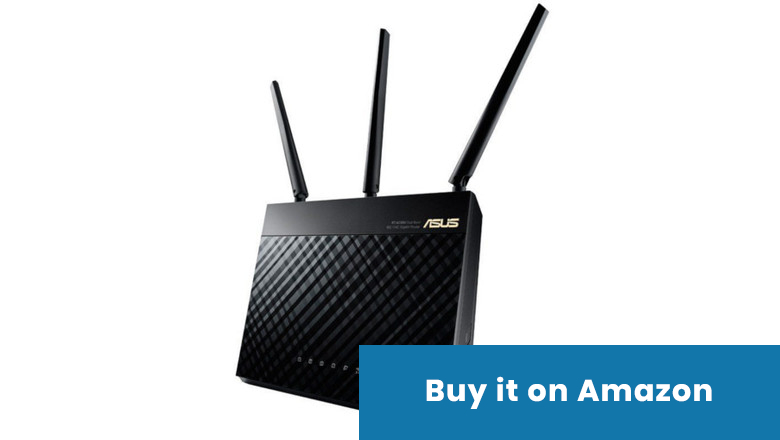 Asus is such am important brand to home networking, that their RT-AC68U router, which came out in 2013, remains one of the best AC routers of 2018. This AC1900 router offers a robust Dual-Band connection (1300Mbps over 5GHz + 600Mbps over 2.4GHz), which offers the flexibility to do basic web browsing without interrupting someone else’s streaming on the same network.

Some buyers complained that the 5GHz band does not reach as far as similar routers, but might neglect to consider the role that environmental hazards can play on a wireless connection. Asus even tries to remedy this with its AiRadar technology, which maximizes its coverage for your house layout, but results of using this feature are mixed as well.

As for setup, the ASUSWRT interface offers incredibly easy setup from a tablet, smartphone, or PC, and an intuitive and dynamic display for changing settings once your network is up and running. This router comes with an array of nice features like guest networks, parental controls (which are unfortunately limited), a built-in download client for bittorrent, and more.

However, perhaps the nicest features are the simplest ones, like the physical button to turn off the unit’s LEDs and make the router more bedroom-friendly. If you greatly prefer Asus gear but might not need the power an AC router offers, the cheaper Asus RT-N66U N900 Gigabit Router is a great option as well. But in my networks, I always go big or go home. 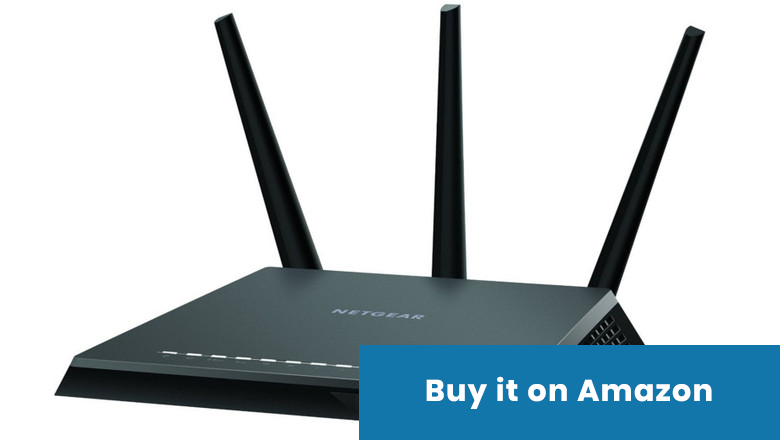 With a case reminiscent of a stealth plane, Netgear’s Nighthawk AC1900 Gigabit Router attempts to hide its bulky casing with sleek edges while offering a high-capacity AC1900 Dual-Band connection (1300Mbps over 5GHz + 600Mbps over 2.4GHz).

The original R7000 Nighthawk model has since been dethroned by the Nighthawk X6 as the fastest Netgear router available, but that leaves this older model at a discounted price that nets you an excellent value for a robust Dual-Band network that can easily balance connecting light-use devices like phones with gaming consoles that practically demand their own network.

Its TurboQAM technology gives an important boost to its 2.4GHz band, raising its maximum stream from 150Mbps to 200Mbps, which in turn frees up more bandwidth on the 5GHz band. Netgear’s proprietary Beamforming+ automatically manages both WiFi signals for optimal performance, which it seems to do a pretty good job of, considering that this router rarely produces dead zones.

Netgear’s NetGenie software makes managing your connection fairly easy too, although it does not run as well on mobile devices as it claims to. From a PC, however, NetGenie is a versatile and simple software for managing your networks, and allows for easy use of the router’s built-in Open VPN server, a great feature for business users.

You also have access to parental controls, guest network controls, and personal FTP service. All in all, any of Netgear’s Nighthawk routers are a solid pick for home networking. Yes, the Nighthawk router is bulky, but it is wall-mountable and its three antennas are all removable, so we can glance over this flaw to focus on the router’s fantastic performance. 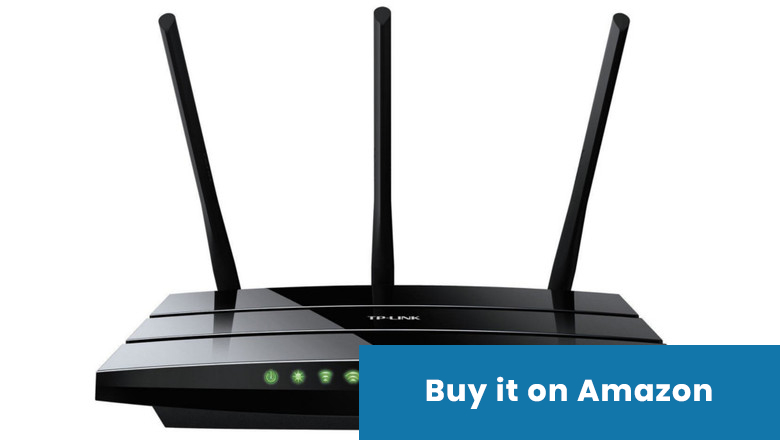 Though a less well-known name than other routers on the list, TP-LINK offers a competitively priced AC1750 that is just barely outperformed by AC1900 routers. Many users will find that a maximum 1.75Mbps (450Mbps over 2.4GHz + 1300Mbps over 5GHz) is still plenty fine for home use, especially since the “fast lane” band 5GHz performs just as well as top models.

So what are you giving up with this middle of the pack router? Not much really. Its processor is a single core, which means that its upstream and downstream ratings will not be as high as top routers, but it still delivers solid performance. And while all of the other routers on this list have at least one USB 3.0 port to connect hard drives, the C7 only has USB 2.0 ports at its disposal.

There is also a lack of advanced options on the online user interface, but average users might find that to be a good thing. You still get the most important features, the standard guest network, parental controls, and FTP server options. Again, the simplest features are the most useful, like the soft reset switch to power cycle the router makes troubleshooting and firmware updates a breeze.

Unless you are looking for some specific features out of your router, the value of this router comes at almost no downside. And you might even prefer the even more affordable TP-LINK C20i AC750, however that will not work quite as well with large multi-story homes. 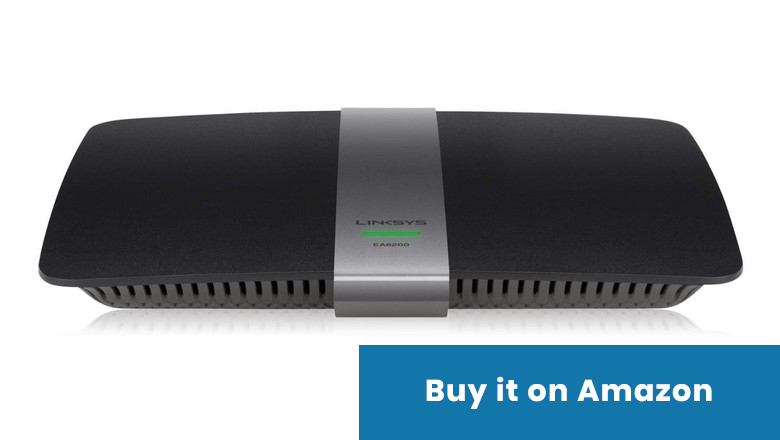 Linksys’ EA6200 is an AC900 router of a different class from the rest of the routers on this list. True, it is not a high-performance router, but in terms of performance to price value, it one of the best AC routers of 2018.

It is Dual-Band (N300Mbps over 2.4GHz + AC565Mbps over 5GHz) but not quite up to Gigabit speeds. This is good enough for most users, but if you are paying for a top-tier internet plan, then you’ll want to move along. However, if you have a basic 50Mbps plan, this could be an excellent alternative to a high-end router, whose feature set would go half unused anyway.

Setup and management is so simple that this router will actually download firmware updates for you, and it works well on smartphones, tablets, or a PC. Using these controls, you can perform useful tasks like prioritizing connection to specific devices, making the most of this router’s average performance level.

Linksys hasn’t skipped on the basics either, with WPA/WPA2 encryption, parental controls, and guest network setup to boot. There is only one USB port, but it is USB 3.0, which is great for streaming content around the house. Ultimately, Linksys’ EA6200 sits at the intersection of price, usability, and power, which makes it a great option beside all-our performance.