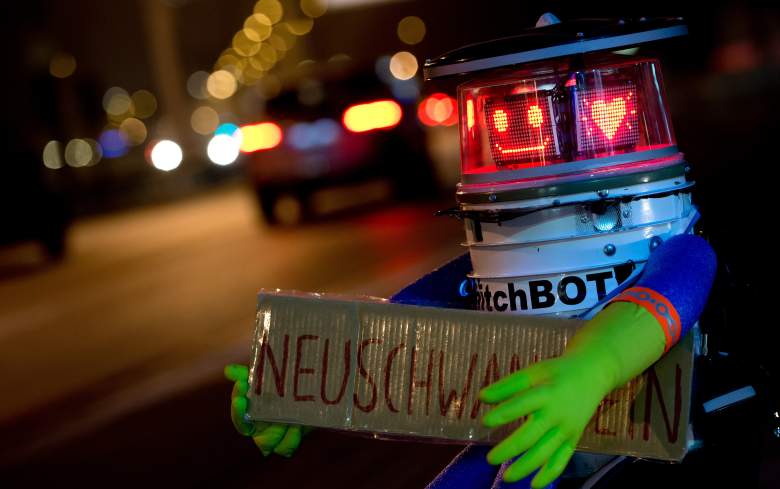 The happy robot “hitchBOT” is seen holding a sign reading “Neuschwanstein” as he waits for a lift at the roadside in Munich, southern Germany, on February 13, 2015. HitchBOT only lasted two weeks once he reached the United States. (Getty)

This is why we can’t have nice things.

A cute robot with a smiley face and hearts on its head had a successful run across the world, only to arrive in the United States and die two weeks later. The social experiment hitchhiking robot called hitchBOT traveled Canada, Germany, and the Netherlands, only to be killed when it arrived in Philadelphia. It was found headless, missing its electronic parts. The robot’s last car ride is seen in a YouTube video in fact #4 of this story. The same people who filmed the YouTube video later released a film of hitchBOT being destroyed. The film was later deemed to be fake.

There’s a lesson somewhere in all of this.

1. hitchBOT Was a Canadian Research Project

HitchBOT was created in Port Credit, Ontario, by Dr. David Smith of McMaster University and Dr. Frauke Zeller of Ryerson University, according to hitchBOT’s website. He was designed to travel the world, posting photos to Instagram along the way. The hashtag #hitchBOTinUSA was created to document his travels across the United States. HitchBOT was designed to be picked up by residents, driven around to local or historic sites, get his photo taken in various places, and then be dropped off for the next resident to pick him up and take him along his journey. He posted a bucket list of where he wanted to go online, to help people know where to take him.

2. It Traveled Safely in Germany and Canada

The robot traveled safely in The Netherlands, Germany, and Canada. He traveled throughout Canada in 2014, covering more than 10,000 km that ranged from Halifax, Nova Scotia to Victoria, British Columbia, according to his website. He began his travels in Germany on February 13, 2015, starting out in Munich. In 10 days, according to hitchBOT’s website, he traveled through cities including Berlin, Cologne, and Hamburg, visiting castles, the Cologne Cathedral, and other historic sites. He was returned to Munich on February 22. HitchBOT traveled in the Netherlands from June 7 to June 24, 2015 and even rode on an Air Canada flight to Amsterdam, according to the robot’s website.

3. The Robot Lasted Just Two Weeks in the United States

The robot intended to travel across the United States, but this map shows that hitchBOT didn’t get very far. (hitchBOT website)

You can see from the map pictured above that hitchBOT didn’t get very far in the United States. The plan was to travel from Massachusetts to California, but he only made it to Philadelphia.  His travels included a boat ride in Gloucester, a ride on Boston Duck Tours, a trip to Boston’s Public Garden & Common, a visit to Fenway park and even an appearance on the kiss cam. Next stop was New York City.

#hitchBOT is now with @sokmelousy and is headed to NYC. Look forward to following the journey. #hitchBOTinUSA pic.twitter.com/BlMKkd6p0R

There, hitchBOT made it to Times Square, Radio City, and had interviews with several media personalities. It was time to move on, to what no one knew would be his last stop.

?@edbassmaster & I just picked up a hitchhiking robot!! This night has gotten really weird. @hitchBOT pic.twitter.com/Q2ijplpAT1

4. Its Last Car Ride Was Filmed in Philadelphia

Skip ahead to about 10:50 in the video by BFvsGF on YouTube, and you’ll see the last two people to find the robot intact: Jesse Wellens and Ed Bassmaster. They filmed where they found the robot, their travels with hitchBOT, and even the point when they dropped him off.  They explained in the video that if the robot saw a car driving by, it moved its thumb to look like it was hitchhiking:

Somehow it came to me and I’m part of this journey for this crazy robot. So it’s kind of neat. Let’s go robot.

In the video, they quickly realized that the robot was programmed to respond to certain questions. They asked hitchBOT if it needs a seatbelt and hitchBOT says “yes.” They later said, “Please sit in the back” and hitchBOT responded: “Why, so you can insult me again?”

Throughout their car drive, hitchBOT kept talking and talking. The driver finally said that he had to pull over because he couldn’t keep driving while hitchBOT talked and talked. They eventually dropped the robot off at Elfreth’s Ally around 3 am for someone else to pick him up, like the instructions indicated. They considered hiring a taxi to take hitchBOT to DC, but decided against it out of fear that the taxi would just take the money and drop the robot in a river or something. They even tweeted a request for hitchBOT to be picked up, and many people responded wishing that they could, but it was just too late.

HitchBOT was discovered with his head missing and stripped of his electronic parts. When news broke about what happened to hitchBOT, @Jessewelle, the last person to drop him off, responded:

Of course Killadelphia Kills the Robot!

He vowed to find security footage and figure out who vandalized hitchBOT. Earlier, hitchBOT posted the following sad message:

Oh dear, my body was damaged, but I live on with all my friends. Sometimes bad things happen to good robots! #hitchBOTinUSA

Later, Wellens posted a video with the hashtag #PVPNews, which he claimed showed someone vandalizing and destroying hitchBOT, Gizmodo reported. The video, shown below, was highly suspicious:

Gizmodo reported that the video was faked, since there were no surveillance cameras from that direction and the man in the footage was likely Wellens’ friend Bassmaster. Bassmaster later staged an online performance with his online alter ego, Always Teste, claiming the police were after him.

There aren’t many solid leads in figuring out who destroyed hitchBOT. A twitter user, @JohnnyBurton88, had posted a photo of a headless hitchBOT buckled into his car, with the Tweet: “So my buddy just picked up #hitchBOTinUSA In philly and his electronics are gone along with his head,” but later deleted the Tweet, according to Gizmodo. Although hitchBOT takes photos every 20 minutes, it did not take any photos of the attack.

Here is my final list, let us cross items off together! Show my family by using #hitchBOTinUSA when posting photos. pic.twitter.com/cneybc9DAI

HitchBOT didn’t get very far in his bucket list, and many people were disappointed about his untimely demise. The official hitchBOT Twitter account had a nice little farewell message and a promise to give an official statement soon:

My trip must come to an end for now, but my love for humans will never fade. Thanks friends: http://t.co/DabYmi6OxH pic.twitter.com/sJPVSxeawg