It has been a little while since a new iPad was announced, and according to Tim Cook, this is the biggest new in iPad since iPad. He might just be right. The new iPad Pro is bigger and faster than ever before.

This is an ongoing post and will be updated as Apple reveals more details. Refresh for the latest news.

The iPad Pro boasts the largest screen of any iOS device, measuring in at 12.9 inches, the height of the iPad Air 2. It is only 6.9 mm thick and 1.57 pounds. Though it weighs the same as the original iPad, the screen is 78 times larger. That makes for some serious video streaming.

The screen can display 5.6 million pixels, which is more than the 15 inch MacBook Pro. It really is the closest thing you can get to a desktop device.

That’s all on the outside, but what makes it tick? It has a variable refresh rate, which means it reads how fast or slow something is going on the screen and adjusts energy output to match. No longer will you be draining the same amount of energy if you’re reading a book and watching a video.

It comes with a 64 bit chip called the A9X and the CPU is twice as fast as the previous iPad. That makes it faster than 80% of portable PCs.

Outside of the fact that photos and videos are absolutely brilliant on the new screen, the Pro has a lot to offer. Because it runs so much faster, you can actually edit video using iMovie. It can support up to three 4K video streams simultaneously.

Sound is also very much improved with the iPad Pro. It has four speakers, one on each corner and automatically balances based on how you’re holding the device. This offers a much more well-rounded sound than the previous iPads.

Apple also presented new and exciting accessories. The first is a smart keyboard that only goes with the Pro. It can be folded and unfolded. The next is a a stylus called the Apple Pencil. You can use it to write and draw, and the harder you push down, the thicker the line you’ll produce. The best part is, you can charge it directly from the iPad. 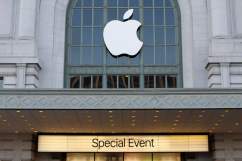 The iPad Pro will be released in November.

Read More
Apple, Apple Watch, Shopping, Smartwatch
wpDiscuz
0
0
Would love your thoughts, please comment.x
()
x
| Reply
The largest screen on an iOS device is here with the iPad Pro. Here is what you need to know.