Does a ringing iPhone cause ants to die? In the video, posted above, ants are just running around an iPhone until it starts ringing. Then they start walking in an eerie circle around the ringing phone, in a march that some experts say is reminiscent of an ant death spiral. Experts aren’t exactly sure what causes ants to do this or what exactly it means, but they have a few theories.

Others say it’s just a result of losing their pheromone trail. But losing the trail isn’t just a minor deal in an ant’s life. It could actually cause the ants to enter a death spiral, which is just as ominous as it sounds. In army ants, for example, losing track of a pheromone trail can cause them to begin following one another until they end up in a never-ending, continuous circle, Science Alert reported. At that point, they’ll just keep moving in a circle until they all die of exhaustion. Here’s an example:

Still others say that the whole video is faked and the ants are CGI. However, the footage also includes one lone ant breaking free of the circle and walking defiantly over the phone itself, so maybe the video isn’t that fake after all. Maybe the question isn’t why the ants are circling the phone, but how one ant was able to break free of the circle.  What do you think? 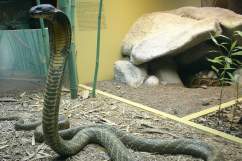 Deadly King Cobra on the Loose in Florida: 5 Fast Facts You Need to Know