Microsoft announced the Surface Studio All-in-One computer at an event in New York on October 26th.

The Surface Studio is the company’s next step in the Surface line: a 28-inch all-in-one desktop computer that has a four-point hinge. The whole screen can be tilted down to a 20-degree angle, which WIRED reported to be a natural tilt for drawing, drafting and swiping on the touchscreen.

The desktkop Studio, referred to by Endgadget as “an engineering marvel” and by WIRED as “alarmingly thin and objectively beautiful” will start at $3,999. The heavier the specs, the more expensive, with options going up to $4,199. 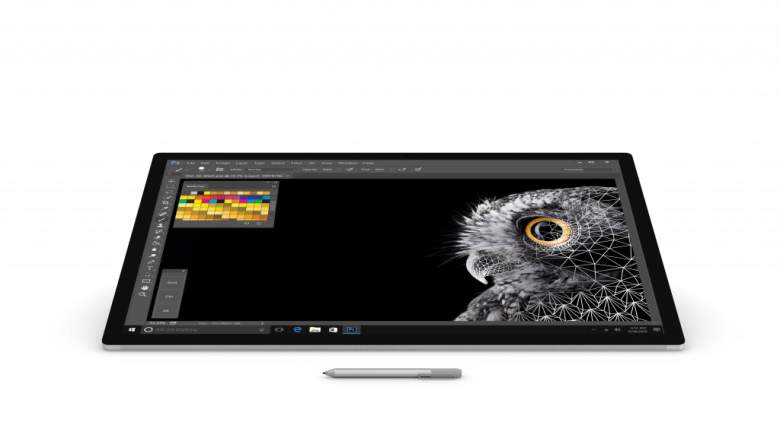 The Zero Gravity Hinge allows the screen to effortlessly adjust to each stage of the creative process. (Microsoft)

The display is one of the Surface Studio’s selling points, with 13.5 million pixels in a 28-inch screen. According to WIRED, the display is scaled true-to-life, so if you’re looking at an 8.5 x 11-inch page, it will be scaled in actual size on the screen.

The LCD is billed by VP of Surface Panos Panay as the thinnest LCD ever made, at 1.3 millimeters thick. The entire computer is only 12.5 millimeters thick, and Panay said the team has to redesign the internals of the desktop from the ground up to get it that thin.

Unfortunately, even at 12.5 millimeters, the screen does weigh 13 pounds, which may be a bit much for the small hinge it works on. Hopefully it will hold up. 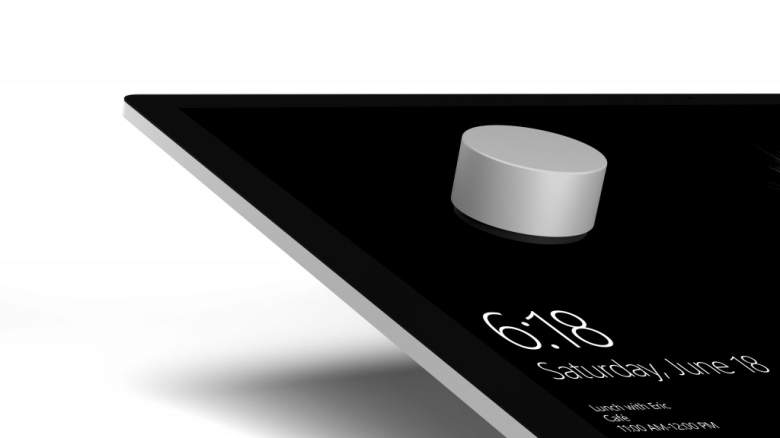 Place the Dial directly on the screen to bring up a set of digital tools specific to the app that is open, allowing people to more seamlessly move through their workflow. (Microsoft)

The Studio also comes with a Surface Pen, the same stylus that comes with Surface 2-in-1s, and a new Surface Dial. The Surface Dial is an interesting accessory. It’s a puck-shaped dot that can be used on or off of the Surface Studio and it touch-sensitive, according to Endgadget.

When it’s placed on the Studio’s screen , a context-aware menu pops up, so you could use it for formatting on Microsoft Word or to help control your color palette in Photoshop. 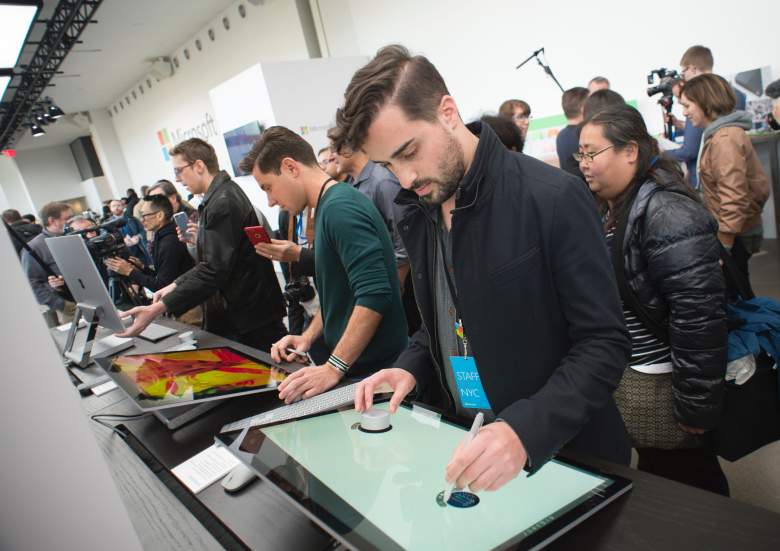 Journalists and Microsoft fans get a look at the new Microsoft Surface Studio introduced at a Microsoft event. (Getty)

The all-in-one will have four USB 3 inputs, an SD card reader, a mini DisplayPort input, an Ethernet jack and a headphone jack, Endgadget reported. No USB-C inputs for the Surface Studio, which may be more of an issue as USB-C comes into the limelight.

These ports are all on the box that serves as the base of the desktop, where the guts of the computer actually are. Inside the box, WIRED reported, there’s a core i5 or i7 quad-core processor, up to 32 GB of RAM, and a 2.1 surround sound system. There’s only one cable coming out of the back, as the keyboard and accessories are wireless.