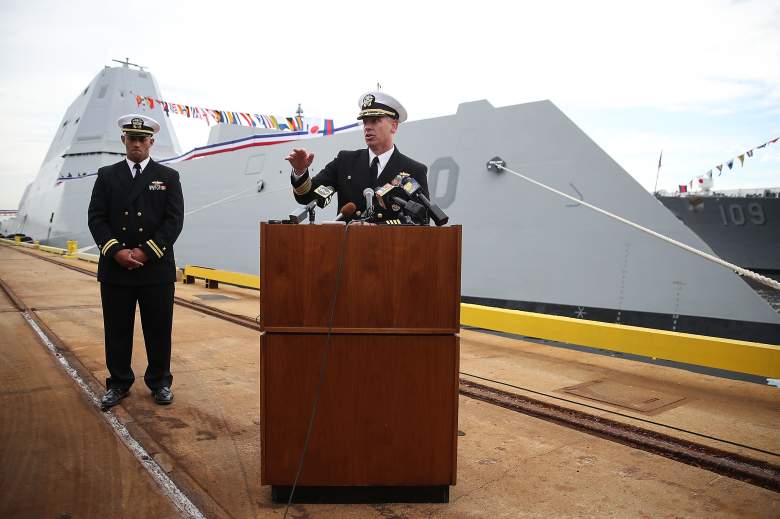 The US Navy commissioned USS Zumwalt on Saturday (Getty)

The US Navy unveiled the equivalent of a SEAL team for the seas with the $4 billion USS Zumwalt on Saturday.

The Commander of the US Pacific Command likened the guided missile destroyer to Batman’s latest toy alongside his tank car and fortress helicopter. While the first destroyer of Class Zumwalt put a dent in the Navy’s budget, it’s hoping to put a larger dent in enemy forces.

“This ship is an example of a larger initiative to increase operational stability and give the U.S. a strategic advantage,” Ray Mabus, the secretary of the Navy in a statement.

Here’s what you need to know about the USS Zumwalt:

1. You Can Take an Interactive 3D Tour of the Ship Right From Your Computer or Mobile Device

You can take a 3D interactive tour of the USS Zumwalt above, thanks to The Bookmark blog.

2. The Ship is Named After Adm. Elmo Zumwalt, a Navy Officer Reformer Who Fought in Vietnam

Adm. Elmo Zumwalt strived for equality in the Navy (Wikimedia)

The newest class of ships honors the legendary Navy officer Zumwalt who served during the Vietnam War and Korean War. He was the youngest man to serve as Chief of Naval Operations, according to the Washington Post.

“Admiral Zumwalt, especially during his time as CNO, ensured that our institution lived by its values,” said Chief of Naval Operations Adm. John Richardson in a statement.

During the Vietnam War he led river patrols while pushing for racial and sexual equality as well as better standard of living for crew members. His son died from cancer after being exposed to the herbicide Agent Orange while serving in Vietnam. Nevertheless, Zumwalt said the use of the chemical was necessary to save American lives. However, he believed that the Soviet Union was the real threat to America. In part because of this view, President Nixon named him Chief of Naval Operations, making him the youngest four star admiral ever.

Perhaps his most important work, however, was as a Navy reformer. He issued a directive (known as Z-grams) in 1970 called “Equal Opportunity in the Navy”, which ordered an end to housing discrimination among crew members. Zumwalt was almost fired after critics attacked him for undermining discipline, but he stood by his policies.

“I firmly believe if I had not set the racial and personnel reforms in motion, the racial explosions in the Navy would have become far more severe,” Zumwalt wrote in his memoir. “I am very proud that the first of several black admirals were selected when I was CNO, and the Navy today is totally integrated.”

3. ‘Batman Would Use This Ship,’ Commander of the US Pacific Command Says

The USS Zumwalt completes Batman’s arsenal of vehicles. Its Commanding Officer James Kirk who stresses he is no relation of the Star Trek character. The ship earned the seal of approval from Adm. Harry B. Harris, Jr., commander of the US Pacific Command.

“If Batman had a ship, it would be the USS Zumwalt,” Harris said.

USS Zumwalt is the first ship of the Zumwalt class known for its stealth capabilities. The ship cuts through the water like a knife with its wave-piercing hull and looks like as unimposing as a submarine from above. The missile destroyer’s angular design decreases its radar footprint while its weapons and radars are hidden to increase stealth.

"If Batman had a ship, it would be the USS Zumwalt," said Adm. Harry Harris, commander of the U.S. Pacific Command. https://t.co/SzbOy74i9d pic.twitter.com/xxkK06fsp1

As for guns, USS Zumwalt is the all-in-one package, although unlike previous destroyers, its meant to support ground forces rather than engage in deepwater warfare. The ship can fire rocket-powered explosives 70 miles away and has Tomahwak Cruise missiles in addition to the standard surface to air and anti-submarine rockets. Here’s a glance at some of USS Zumwalt’s weaponry: 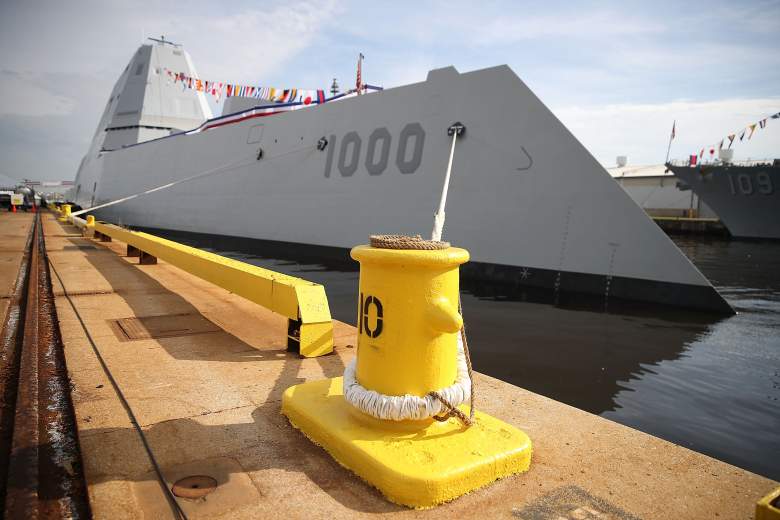 This is the Navy’s most expensive destroyer yet (Getty)

The USS Zumwalt contract went to Maine’s General Dynamics Bath Iron Works for $1.4 billion. Northrop Grumman Shipbuilding was also awarded a $1.4 billion contract for the construction of the second ship of the Zumwalt Class, DDG-1001.

USS Zumwalt aka DDG-1000 was conceived in 2002 and has been carefully planned since, according to a 2008 Navy press release. Initial funding for the ship came from the National Defense Authorization Act in 2007. The Zumwalt took a huge bite out of the Navy’s budget, so much so that it could only built three more ships in Class Zumwalt instead of the originally planned 32.

4. USS Zumwalt Has a Smaller Crew Size Because Most of the Ship is Automated & Could Be Used to Strike Targets in Countries Like North Korea

Crew members no longer have the menial task of loading rounds – the ship’s automated system does that for them. The ships also automates fire suppression, flood control and other systems. Extensive automation meant Zumwalt could run with just 147 sailors, half the crew size of the last class of destroyers, said Kirk. Sailors are cross trained to complete a wide range of duties.

“We all work together because there are fewer of us,” said David Aitken, Zumwalt’s chief petty officer.

The ship generates enough power to run a mid-sized city according to Kirk. The onboard power plant provides more than enough electricity to run the ship. Reserves may be used to test advanced weapons like concentrated laser beams.

#USSZumwalt will give us a clear edge against immediate threats like #NorthKorea, still on a quest for nuclear weapons and delivery systems. pic.twitter.com/8ocFb5BtpQ

The multipurpose ship’s weaponry and stealth capabilities make it a valuable asset to ground forces. With hope, the USS Zumwalt’s stealth capabilities will allow it to support ground forces undetected. Ron O’Rourke of the Congressional Research Service said the Zumwalt could strike targets like those in North Korea. The Navy affirmed the unique capabilities of the ship in a 2008 press releasing announcing the contract:

US warships have become involved in the civil war in Yemen between the Houthi rebels, a Shiite group, and the Yemeni government. The Houthis fired missiles at an American warship, prompting cruise missile strikes against radar instillations believed to be used in the Houthi attack in October the New York Times reports. Increased military support by sea may be necessary as the next president inherits the problem of containing ISIS.