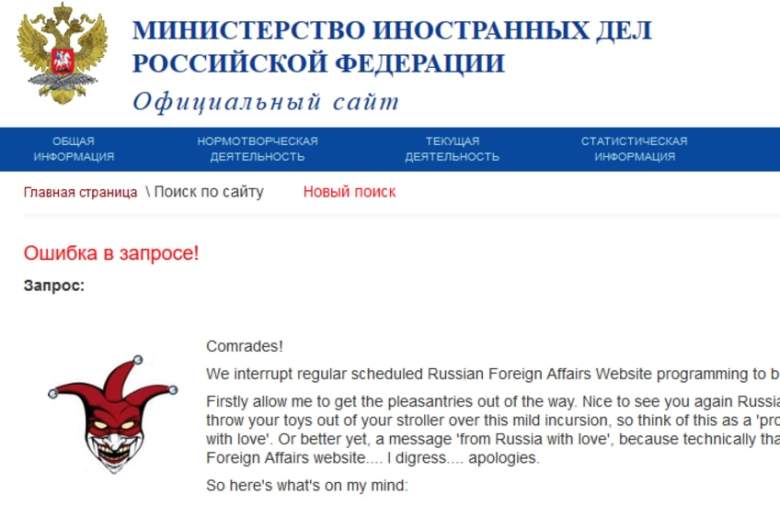 Ex-FBI officials call him the Batman of the Internet. He prefers a more menacing name: The Jester.

The Jester is responsible for retaliatory hacks on what he considers enemies of the United States including Iran’s President and jihadist websites. With some sleight of hand, he fooled news outlets like CNN and Fox into believing he had hacked Russia on Friday.

The hacktivist defaced an old version of Russia’s Foreign Affairs website. He says his attack was in retaliation for the string of hacks leading up to November’s presidential election. The US has publicly tied Russia to cyberattacks on election systems as well as email leaks of government officials though Russia denies the attacks.

Here’s everything you need to know about ‘The Jester’:

1. He Called Out Putin in a Message Posted on an Archived Version of Russia’s Foreign Ministry Site

Props to @th3j35t3r for this. See his laptop at @IntlSpyMuseum (we might want the one you are using now too…) pic.twitter.com/vMVRp5cUte

The Jester told Russia to leave America alone in a message posted on Russia’s Foreign Affairs website. The Jester said he believes Russia was behind the DNS cyberattack that led to widespread internet outages in an interview with CNN. He targeted Russian President Vladimir Putin specifically, who has denied backing the hacks against the US.

The Jester critiqued what he called Russia’s overblown response to the cyberattack on his blog, Jesters Court. The targeted site was no longer in use according to Maria Zakharova, spokeswoman for Russia’s Foreign Ministry. Still the Jester reveled in having fooled Russian media, which reported that the site had been hacked before changing its narrative.

“The key takeaway here is that Russia, possibly for the first time EVER out-propagandered THEMSELVES and admitted via their OWN national media,” The Jester wrote in a blog post.

2. The Jester, aka th3J35st3r, Denies He’s a US Proxy in a Cyberwar Against Russia 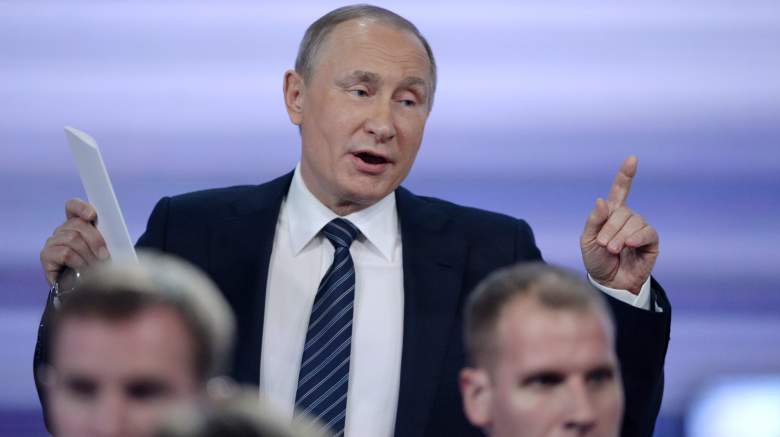 The Jester calls himself a “patriot hacktivist” and freelancer, but many suspect the US condones his activities even if it doesn’t support him outright. The US has so far let the Jester on the loose, even as it prosecutes cybercriminals for attacking the US, according to Newsweek.

Though the Jester says he’s operating outside the law, he says his allegiances lie with the US. The hacker said he would never retaliate against the US government. So far, his list of targets line up nicely with those of the US such as jihadists and WikiLeaks in 2010 and most recently Russia. However, he insists he’s operating independently and without any direction from intelligence officials. The Jester also disassociated himself from the anonymous movement, a group of hacktivists responsible for cyberattacks against governments, religious and corporate sites.

3. The Jester Launched his Hacktivist Career by Fighting Terrorism and Calls Himself a “Criminal”

The Jester splashed onto the hacktivist scene in 2010 when he launched attacks on the Taliban’s website, alemarah.info. He claims to have served in Afghanistan, and a former official confirmed that The Jester was a military contractor who worked on US Special Operations Command projects.

In an interview with University of Southern Maine computer science students in 2012, The Jester told students he has served in four operational tours. In the classroom chat session, the vigilante said he studied computer science in college, previously programmed for a telecommunications company and had a day job.

“Wars wont be fought with boots on the ground soon, they willo be fought and won with fingers on backlit keybs,” wrote th3j35t3r to the class. “I break the same laws the bad guys do. I am under no illusions that I am also a criminal.”

4. He Blames Russia for Cozying Up with Donald Trump and Meddling in American Affairs

SATAN: "Trump sold me his soul but now I have buyers remorse".

In the post on Russia’s foreign ministry site, The Jester describes the DDOS attack as the last straw in what has been an acrimonious relationship between the US and Russia. The hacker who has attacked WikiLeaks before, says the state of relations with Russia has been on “medium-heat” until now. The Jester’s message lists celebrities affected by the Internet outage such as Donald Trump who didn’t have access to the polls that allowed him to trick supporters, “into not jumping ships like frightened rats.”

He’s been an outspoken critic of Trump and has compared him to Satan. However, he’s not too enthusiastic as having Hillary Clinton as the only alternative.

I''m not mad at Trump for being Trump. I'm mad at America for making him my only option for stopping HRC. That was 'their' first mistake.

5. The Jester Has a Cameo Appearance on ‘Mr Robot’ and is Featured in the International Spy Museum

In the TV series Mr Robot, The Jester’s trademark red masked marauder appears in a ransomware message. The easter egg appears when the hackers of fsociety try to steal money from the company Evil Corp before destroying it. The logo on the computer screen also includes one of Jester’s quotes: “There’s an unequal amount of good and bad in most things. The trick is to figure out the ratio and act accordingly.”

A buddy of mine who just found @th3j35t3r just saw this on an episode of Mr. Robot. Lol.. pic.twitter.com/Himy8To5sp

As a testament to the power of computers, the International Spy Museum in Washington DC has displayed The Jester’s personal laptop in the Weapons of Mass Disruption exhibit. His labtop shares space with a laptop and assassin’s assault rifle used in the James Bond thriller Skyfall.

The Jester used the laptop from 2012 to 2013 to take WikiLeaks offline as well as target 200 jihadist websites, according to Newsweek.