Reddit’s CEO Steve Huffman has admitted to personally editing user comments. He’s confessed to changing comments on a Trump-positive subreddit r/The_Donald to insult members of the same subreddit rather than insulting Huffman himself, as they originally did. He generally changed comments that said “F**k u/spez” to “F**k r/The_Donald,” according to the apology he published on Reddit.

This all began, Yahoo News reported, when Reddit decided to ban a subreddit community called r/pizzagate. It was focused on attempting to prove that Hillary Clinton and John Podesta were involved in a child molestation ring run out of a D.C. pizza shop, but the subreddit was shut down because “we don’t want witchhunts on our site,” reported Yahoo News.

The shutdown of r/pizzagate proved controversial among Trump supporters, and members of the /r/The_Donald subreddit started vehemently bashing Huffman with “F**k u/spez” comments, which Huffman unceremoniously changed to “F**k r/The_Donald” comments without the consent of the users.

He’s assured users that “it’s all fixed now” and he “most assuredly won’t do this again,” but he doesn’t mention that he actually regrets the changes. He actually said the reason he won’t be editing comments is that “our community team is pretty pissed at me.”

The rest of Reddit doesn’t seem too convinced… and some are accusing Huffman of ruining all of Reddit’s credibility. Now who will ever know which comments have been edited by the CEO? Others are calling for the CEO to resign. 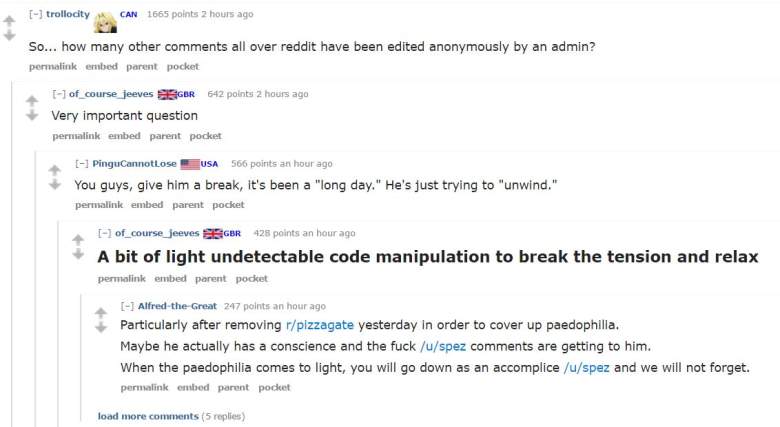 Huffman doesn’t seem too concerned or apologetic, but Reddit users seem like they’re about ready to march over to his office and find a way to fire him themselves.

Read More
Reddit, Reddit.com, Technology
Reddit CEO Steve Huffman has admitted to changing user comments without their permission, and after banning r/pizzagate, users are about finished with him. Read his apology and user responses here.