Facebook is blocked in China, but that may change as its CEO Mark Zuckerberg strengthens ties with the Chinese government.

However, the New York Times reported that Zuckerberg has reached out to China’s president Xi Jinping, and has overseen the development of a tool unprecedented in its censorship abilities. While censoring online content is nothing new in other countries like Iran, the ability to censor news before it’s posted is on another level. 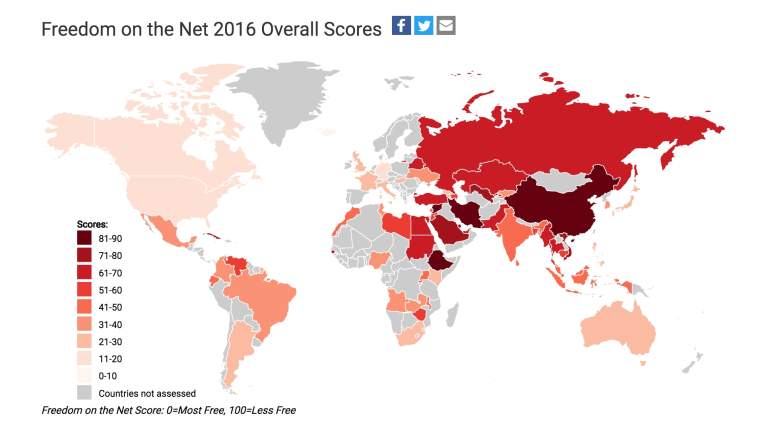 The NGO Freedom House named China the “worst abuser of internet freedom” in its 2016 report.(Freedom House)

By far, China’s 1.4 billion population dwarfs that of other regimes who closely monitor and censor dissident activity. The most populous country in the world presents a big opportunity for Facebook as it seeks to expand its user base. The country could be worth hundreds of millions of dollars to Facebook, according to an LA Times report.

However, some Facebook employees with concerns about the tool have left the company. The new tool would allow a third party -most likely a Chinese company – to monitor news topics trends and filter them based on location, according to the Times. Addressing the discontent surrounding the censorship tool at one of Facebook’s weekly meetings in July, Zuckerberg said, “it’s better for Facebook to be a part of enabling conversation, even if it’s not yet the full conversation.”

Facebook employees warned that the tool may or may not be used. Furthermore, a Chinese regime that is resistant to change would likely roadblock Facebook’s outreach efforts. Still, the New York Times reports that several of China’s tech officers have warmed to the idea. By providing data on bubbling topics, the tool could extend the surveillance arm of the Chinese state.

It’s possible for people in China to access banned sites with a VPN. However, 56 percent of Chinese adults uses a social media service, according to internet consultancy network Kantar’s annual social media report. In 2013, China purged influential personalities on the popular Sina Weibo microblogging platform who made critical comments about the government. Since then, China has censored material on other microblogging platforms as WeChat, also known as Weixing. A law went into effect on 2015 November 1 that would sentence people who spread rumors on social media to 7 years in prison.

Oh, so Facebook has a tool ready so users in China would only be able to see fake news. https://t.co/epvHsQ0KZl

Facebook has already come under fire for helping spread fake news, which some people believe influenced the 2016 presidential election. The censorship tool under development has called into question Facebook’s claim to create more open conversations. In September, Facebook was held accountable for blocking ‘Napalm Girl’, a Vietnam War-era photograph of a naked girl fleeing a Napalm attack.

Facebook’s censorship tool appears as a way to appease an authoritarian regime. China has a long history of prosecuting political opponents and suppressing public opinion. Reports that individuals from XinJiang province planned an attack on Tiananmen Square – the location of a massacre of protests at the military’s hands in 1989- were censored by China’s internet censors in October of 2013.