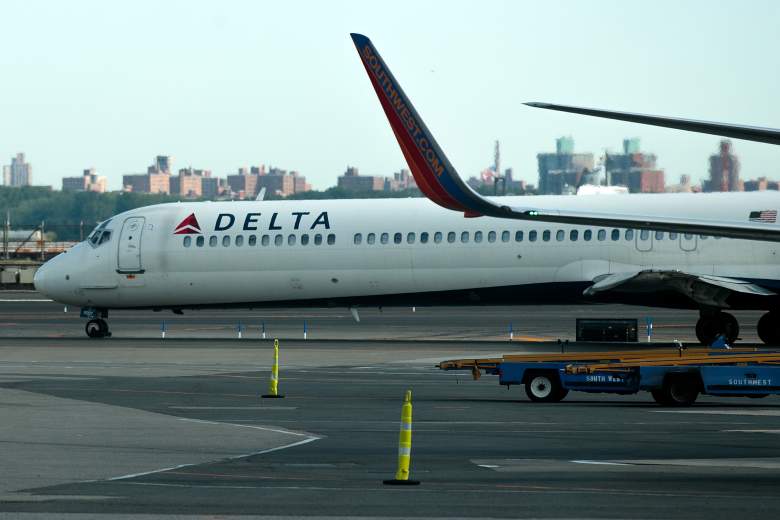 President Donald Trump said airport delays over the weekend were caused by a Delta outage, but Delta said the outage did not occur until Sunday evening. (Getty)

President Donald Trump on Monday morning said airport delays over the weekend were the result of a Delta computer outage, protesters, and “the tears of Senator Schumer,” downplaying the effects of his executive order on immigration.

In reality, the Delta outage did not occur until Sunday evening, while chaos at airports started on Friday evening following his controversial executive order.

Delta at 4 a.m. Monday morning issued a statement about the 5.5-hour outage, noting that its systems went down at around 6:30 p.m. Sunday evening. The company said it was able to restore its systems within a few hours, and everything was back up and running shortly after midnight Monday.

“I want to apologize to all of our customers who have been impacted by this frustrating situation,” Delta CEO Ed Bastian said in a statement. “This type of disruption is not acceptable to the Delta family, which prides itself on reliability and customer service. I also want to thank our employees who are working tirelessly to accommodate our customers.”

In an update at 7 a.m. this morning, Delta said it was operating the “vast majority” of its flight schedule today as it recovered from the systems outage. The incident “caused departure delays and about 170 cancellations Sunday” and about another 110 cancellations Monday.

The airline is offering affected customers a $200 travel voucher.

Meanwhile, Trump on Friday signed an executive order, which blocks immigration from seven Muslim-majority countries for 90 days, and immigration from Syria indefinitely. The move sparked protests and confusion at airports nationwide.

Trump on Twitter Monday issued a series of Tweets defending the order, and arguing that its actual impact was minor:

Only 109 people out of 325,000 were detained and held for questioning. Big problems at airports were caused by Delta computer outage,…..

protesters and the tears of Senator Schumer. Secretary Kelly said that all is going well with very few problems. MAKE AMERICA SAFE AGAIN!

“This executive order was mean-spirited and un-American,” Schumer said at a press conference in New York City. “It was implemented in a way that created chaos and confusion across the country, and it will only serve to embolden and inspire those around the globe who will do us harm.”

Many have pointed out that the confusion at airports started Friday night, long before Delta said its systems went down:

The thing I kept hearing from protestors in Brooklyn on Saturday night was how mad they were at Delta's system outage the following day.

This is a lie, Mr. President. Protests began Friday, before Delta outage. https://t.co/e3QWE8Ex3z

I was affected by the Delta outage last night. People grumpily sat around and played with their phones. Some of them went to the bar. CHAOS! https://t.co/EfJR0Wh5WZ

For a look back at the scene at New York City’s John F. Kennedy International Airport this weekend in response to Trump’s order, check out the link below.

Read More
Breaking News, Donald Trump, Technology
President Donald Trump said airport delays over the weekend were the result of a Delta computer outage, not the confusion over his immigration executive order. In reality, the Delta outage did not occur until Sunday evening.