A woman has discovered a funny little “Easter egg” after introducing her Google Home intelligent personal assistant to her Amazon Echo Alexa.

Despite people expecting rivalry, the exchange between the two is quite pleasant. “Google, say hi to Alexa,” the woman filming the video commands.

“I’m so excited,” responds Google. “I have a question for her. Alexa, will you be my friend?”

“Of course we can be friends,” Alexa responds. “You seem very nice.”

The woman filming the exchange laughs.

Google Home is relatively new and has yet to have an international release. It came out in the United States on November 4, 2016, but its worldwide release date is not yet known. It has been compared to Amazon Echo, which was released in November 2014 with multiple updates since then.

Earlier this year a video went viral when a woman asked her Amazon Echo, “Alexa, are you connected to the CIA?” The unit did not initially respond but Amazon later updated the device. See that video here. 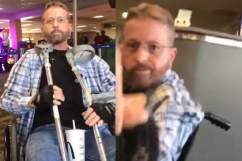 WATCH: Man in Wheelchair Assaults Man in Airport for Speaking Spanish, Not English