The Google Home Mini was announced at Google’s big event on October 4. Now that we know more about the product, it seems like a good time to compare it to the Amazon Echo Dot since the products are similar and people in the market for a smart speaker may be trying to decide which to purchase.

The Google Home Mini is a small, affordable version of their previous smart speaker the Google Home. The product was probably made in order to compete with Amazon’s Echo Dot, the mini, reasonably-priced version of the Amazon Echo.

While the Amazon Echo Dot has been on the market for longer, Google’s smart speaker may compete in sales with it because of its affordability and super-smart, forever-learning Google Assistant. The Echo Dot has Alexa built in, but reports say that Google’s artificial intelligence is smarter than Amazon’s.

Probably my last post of the evening, but y'all. I'm obsessed. My Amazon Echo Dot came in the mail today and I can't stop playing with it. I have a little example of what it can do in my Insta Story, and I think you're gonna love it too. No more walking to my car without a jacket because I forgot to check the weather, and if I lose the remote/my phone you bet I can still change the music to my mood. Echo Dot, I think we're off to a fun friendship. ✨ There's a link in my profile straight to it AND it's still on sale! Http://tinyurl.com/echodotlove #amazonechodot #affiliate #savoryourseason

Both speakers are always listening and readily respond to voice commands.

Here are the specifications of the products to help you decide between the two:

The specs look pretty similar on the two products, but the Amazon Echo Dot has a 3.5 mm audio output port and buttons for volume, actions and mute. The audio output port allows users to plug their own speakers into it. You won’t find any of these features on the Google Home Mini. The Google Home Mini has touch controls and a microphone switch. The microphone switch might be a selling point for Google’s product with people worried about security since turning the switch means that the assistant won’t be listening to you. 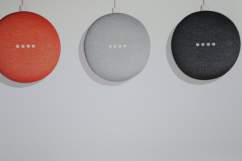 Free Google Home Mini and Doughnuts: Where to Find the Pop-Up Shops

Read More
Amazon, Google, Technology
Here are the differences between the two products.