With the release of the iPhone X on the mind of Apple enthusiasts everywhere, there are still some questions that need to be answered. Apple pushed wireless charging as a new feature for their products during their unveiling, but not much was said on the subject of quick charging.

The iPhone X will have many of the same features of the iPhone 8 and 8 Plus, with some improvements.

The iPhone 8, iPhone 8 Plus and iPhone X models do feature fast charging. According to the tech specifications page, the chargers can can charge your phone up to 50% from dead in only 30 minutes. These are the first series of iPhones to support fast charging.

Of course, there is a catch. The phones themselves don’t come with fast chargers. To use fast charging on your new iPhone, you’ll have to purchase the Apple USB-C charger and Lightning cable, which will cost anywhere from $49 to $79. Since Apple sells 3 different models of the fast charger with different wattage, it’s unclear whether the 0 to 50% in 30 minutes applies to all 3 of the models or just the most powerful one.

When it comes to fast-charge capabilities, the fine print on Apple’s website says that fast-charge time will vary with environmental factors and actual results will vary.

The iPhone X, pronounced iPhone 10, was announced at a special event on September 12. The iPhone X will be officially released on November 3, but pre-orders will go live on October 27 at 12:01 a.m. PDT. 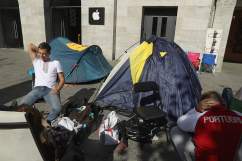 Read More
Apple, iphone x
Here's what you need to know about quick charging and the iPhone X.