The app called TBH has been topping the iTunes charts since release with over 4 million downloads in less than 2 months.

The app is described on the iTunes store as “the only anonymous app with positive vibes,” and was created in response to anonymous apps and websites like Sarahah that were sometimes linked to cyber bullying. According to a Buzzfeed article, TBH cannot be used in the same way since it does away with typing completely.

Update: TBH has been acquired by Facebook, which makes it much more likely for TBH to spread to different devices more quickly. It could be coming to Android sooner than we originally thought. The homepage of the TBH website also says “Coming soon on Google Play” now.

Facebook Buys TBH App: What You Need to Know

People who are lucky enough to have access to the app seem to be loving it so far if Twitter is any indication.

You’re given a question like “the person I relate to the most” and then it lists 4 friends that are also on the app. You choose which friend the question applies to the most. When one of your friends chooses you as a response, you’re notified that someone chose you, but it’s anonymous, so you don’t know who chose you.

The app was created by a company called Midnight Labs in Oakland, CA. The company has spent over five years making social apps that were seen as failures and then they decided to make TBH and make people feel good.

Today we crossed a major milestone: 1 billion polls answered ?
Special thanks to our wonderful community pic.twitter.com/cYVT8yLuXE

The app launched at a school in Georgia and after 3 days it’d spread to thousands of schools. The app is definitely angled toward teens, but adults can sign up too. It’s not required that anyone who uses the app be in school, just have some friends that have also downloaded the app to play with. According to their Twitter page, the app has had more than 1 billion polls answered. 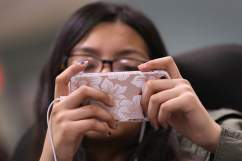