Instagram has implemented a new notification that will be sent to users who search the app for photos using various wildlife hashtags, such as #slothselfie and #koalahug. According to National Geographic, the social media platform, which is used by over 800 million people, will attempt to raise awareness for exotic and endangered species by flagging users who are searching for pictures that may contain wildlife exploitation.

“We care about our community, including the animals and the wildlife that are an important part of the platform. I think it’s important for the community right now to be more aware. We’re trying to do our part to educate them,” Instagram spokeswoman Emily Cain explained.

Hundreds of hashtags in a few different languages will prompt the notification, which you can read below. A full list of hashtags that Instagram has flagged has not and will not be released by the company as it hopes that users will “stumble on them organically.”

“So what’s troubling about a photo of someone hugging a seemingly cuddly wild animal like a koala? It’s the interaction, wildlife experts say. Many animals people most want to cuddle, like sloths, don’t do well being repeatedly handled. It can be very stressful, [head of wildlife campaigns at World Animal Protection Cassandra] Koenen says, but it’s hard for people to observe the effects in the animal they’re handling. In fact, research has shown that most tourists are poor judges of whether a wildlife attraction is bad for animals,” reports National Geographic.

For now, the move is meant to raise awareness and, perhaps, stop people from posting photos that show animals (like sloths and koalas) engaging with humans in any way that could be distressing to the animal.

This move is just the first phase that the company has put into play. In the future, it’s possible that Instagram may alter its guidelines to further raise awareness and perhaps even prohibit any and all posts that depict this form of animal abuse.

“Social media has not yet really woken up to the full scale and extent of the nature of illegal wildlife trade that’s being used and promoted [on social networks]. For Instagram to really step up now and recognize it and take strong measures, I think is very significant. And it will set an important yardstick for others in social media to think about and follow,” senior director of TRAFFIC at the World Wildlife Fund, Crawford Allan, told National Geographic.

This isn’t the first time that Instagram has implemented a notification when users search for certain hashtags. In fact, there have been pop-ups for searches related to suicide, self-harm, and eating disorders. Instagram has a section for self-injury as part of their “privacy and safety center.” In that section, there is a phone number for a suicide hotline, and additional information for people who may be struggling with depression and suicidal thoughts or that may know someone who is.

Instagram has several other “help” categories that include “hate accounts,” abuse and spam,” and “exploitation.” 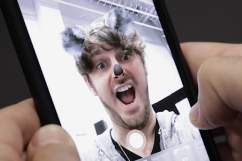