The SpaceX Falcon Heavy’s twin booster landing was flawless, but what happened to the SpaceX Drone Ship landing? We didn’t see it on the live feed, and some people watching the technical feed said that officials remarked about the center stage being lost. Was it a success? Although there was no official word from SpaceX right away, we had hope for a while because it’s not unusual for the feed for a drone ship landing to be lost. Often because of the exhaust and the vibrations as the main center core is landing, the feed can be lost. But despite that hope, we knew there were a lot of signs pointing to the center core not making it back. There were rumors about screenshots from the live feed that indicated it might have missed the ship. And now we know that it did.

UPDATE: During the press conference, Elon Musk announced that the center core looked like it ran out of the igniter on two of the three engines. It hit the water at 300 mph. The core center booster, he said, will be a blooper reel video if they can get the footage back. The side boosters, meanwhile, are in very good condition and are re-flyable.

In other words, the center core could only relight one of the three engines needed to land. That’s why it hit the water going at 300 mph. It looks like two engines on the drone ship might have been taken out when it crashed. But this is a minor issue in light of a highly successful test launch. So it looks like when we heard someone at mission control say “we lost the center core,” they weren’t just talking about losing the feed. They really did lose the center core.

As far as what happened after this point, the third burn was successful, it exceeded Mars orbit and kept going to the asteroid belt.

Something I learned from a friend working at SpaceX… the feed from the droneship is lost during landings because the exhaust from the rocket scatters radio waves. They can retrieve the video after the air clears, though. https://t.co/TmBovQnGTD

These are the last photos we saw during the test flight for the drone ship and the center core before the feed cut out:

Looking back at footage drone ship went from left image to right in a frame and then cut out. Looks like core might have crashed. ?#falconheavy #spacex pic.twitter.com/3mM1q66gUk

If videos or photos of the SpaceX drone ship landing become available, we will add them to this story. We’re on pins and needles, waiting for the official word about whether the center core made it successfully to the drone ship. There was a moment in mission control when they said “we lost the center core” (see the video below), but it’s not known if that just meant they lost the live feed (which is expected) or if they actually lost the core.

Others are analyzing the live feed, trying to figure out what happened:

Drone ship intact so it did not blow up at the ship (as seen in the 2nd bottom camera angle) #SpaceX #FalconHeavy #CenterCore #ElonMusk pic.twitter.com/bXEiRtZMlg

It’s important to note that even if the core did miss the drone ship, it doesn’t mean the core is destroyed. The Falcon 9 core, for example, was still intact even when it hit the water last week. Musk tweeted at the time on January 31: “This rocket was meant to test very high retrothrust landing in water so it didn’t hurt the droneship, but amazingly it has survived. We will try to tow it back to shore.”

Here’s another clue. During this video, you can hear someone says: “Center core defect on shut down” at 34 minutes 10 seconds:

Here’s another possible hint. According to one space enthusiast, the tug boat that pushes the droneship Of Course I Still Love You, may be on the move and providing hints about the core’s location. The Marine Traffic AIS shows OCISLY’s tug headed east from Port Canaveral.

In the meantime, you might enjoy seeing the side boosters as they landed successfully, simultaneously. Their landing was absolutely flawless and perfectly choreographed.

And here’s a photo of their landing:

And a GIF of the moment the twin boosters landed, because we just can’t get enough of all of this:

What’s next for the Falcon Heavy’s Tesla Roadster? The craft must travel through the Van Allen Radiation Belt for about five to six hours. This is a very iffy process, and a lot of things could go wrong. If things do go wrong, the Tesla might end up just orbiting the Earth. If things go right, the Roadster will be launch into a heliocentric orbit around the sun, bringing it close to Mars.

In the meantime, this might just be the most amazing space video we’ve seen in quite a while:

But many people aren’t paying too much attention to that right now, as they wait for news on the center core and the drone ship:

Trying to figure out news about center core and drone ship like… #spacex #falconheavy pic.twitter.com/SdMCCsQk6z

Even if Falcon Heavy centre core didn’t land successfully on the drone ship, I’m not disappointed. I’m sure @elonmusk and everyone at @SpaceX is, but they should be proud of what they accomplished today regardless. There’s a frickin’ Tesla in space right now. #FalconHeavy #SpaceX pic.twitter.com/QfRgvByP9Z

If you want to relive the entire launch, SpaceX posted an updated video of the broadcast that you can see below: 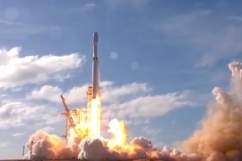 Read More
Breaking News, Elon Musk, Space, SpaceX, Tesla Motors
What happened with the main core's landing on the SpaceX drone ship? Are there any photos or videos? Find out more here.