A few days ago we witnessed the Falcon Heavy launch a shiny red Tesla Roadster into space. But now SpaceX enthusiasts are wondering if there is any way to track the Tesla (and the Starman dummy that is riding in the driver’s seat, wearing a SpaceX spacesuit.) Can you find out where it is in space? As of the time of publication, SpaceX hasn’t put together an app or webpage showing us where it is (although we certainly hope that they do this at some point.) It would also be nice if some apps like Sky Guide added it. Meanwhile, other enthusiasts are sharing where they’ve spotted the Tesla and where it might be going next. Read on for more details about where the Starman is going. We will update this story if SpaceX releases an official tracker.

One SpaceX enthusiast has created a website called WhereIsRoadster showing a rough calculation of where the Tesla might be in space right now. If you can’t calculate this for yourself, this could be a good source until (if) SpaceX puts out something official or other enthusiasts join in with their own versions. The creator of the website said on StackExchange that he created the model “based on the TLEs and the C3 Elon tweeted, and I’m going to update it to use the Ephemeris that SpaceX provided JPL as soon as I can. It should be accurate enough for the moment, but I’m hoping to have increasingly accurate numbers, at least until the fact that we can’t track it causes an issue.” He’s also on Reddit as kd7uiy and has said he plans to add more features in the future.

This is the last official word we had from SpaceX or Elon Musk about the Tesla’s path, as of the time of publication:

The Roadster has been given a few designations. Its NORAD ID is 43205 (but note that this link takes you to the parking orbit prior to the burn that took it out of Earth orbit. It’s not currently accurate. NORAD doesn’t maintain for objects not in Earth orbit, like NASA JPL does.) The international code is 2018-017A and NASA has listed the Tesla Roadster as an official celestial object. You can use HORIZON to track the object if you have the know-how.

The Tesla Roadster, now in solar orbit, has been officially logged as a celestial object by NASA:https://t.co/bDz2zFWdIc pic.twitter.com/CEVjBZXeKH

You can also get more details about it by visiting Project Pluto (which is keyed to the Tesla’s international code.) Click on “Orbit Simulator View” for details that will likely be updated as long as the object is observable.

Popular Mechanics reported that skywatchers have already calculated that the Tesla will do an Earth flyby in 2026, 2031, and 2039. You can read more details about how they made those calculations in Popular Mechanics’ story here. However, these are estimates and “unmodeled soar pressure, thermal radiation, or outgassing accelerations” might cause errors in the predictions.

Other astute astronomers have spotted the Tesla in space. Here is what they have shared:

Last night I took a short break from taking images of galaxies to look at something a lot closer! The animation shows the #Tesla #Roadster & #SpaceX #Falcon 2nd stage that were launched on the first flight of #FalconHeavy on Wednesday morning. pic.twitter.com/cqYumDBfZB

Virtual Telescope has given us a lot of information. First they shared this:

And then they shared a live stream on February 10 detailing the Tesla’s current location:

You’ll definitely want to keep a close eye on Virtual Telescope in the coming weeks and years. Since they’ve given us such detailed information already, they likely will continue to do so from time to time. You can follow them on Twitter here. Be sure to turn on mobile notifications so you don’t miss a single tweet.

Astronomy Live also spotted the Tesla and did a detailed video about the observation on February 8:

Unfortunately, you won’t be able to see any more live streams of the Roadster from the Starman cameras themselves, like we did the day of the launch. The battery life on the Tesla was only good for 12 hours. This is the last picture as it headed out into space:

Keep an eye on all these sources above if you want to keep tracking the Tesla. It’s likely that any one of them will be sharing updated data from time to time. And of course, follow SpaceX on Twitter for official updates. If you choose to “turn on mobile notifications,” you’ll get a notification every time SpaceX tweets, so you won’t miss a thing.

Do you know of a source not mentioned in this story? Let us know in the comments below. 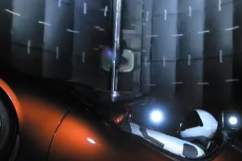 Read More
Elon Musk, Space, SpaceX, Tesla Motors
How can you keep track of where SpaceX's Tesla and Starman are in space? Find out the latest details here.