SpaceX has launched two demo satellites, called Tintin, as the first part of its new global satellite Internet called Starlink. But how do they work and where did the name “Tintin” come from? And how long will we have to wait before we have a worldwide satellite Internet? Here’s what we know so far.

Most likely, the name Tintin is a reference to a comic called The Adventures of Tintin. These are a series of 24 comic albums by cartoonist Georges Remi, who wrote under the name Herme. They were incredibly popular comics and had been published in more than 70 languages by 2007. The hero, Tintin, is a Belgian reporter helped by his dog Snowy. His adventures often include political mysteries, science fiction stories, and fantasy, with slapstick humor. In 2011, a movie was made about Tintin. Two Tintin issues even depicted a lunar mission 10 years before Apollo XI called “Explorers on the Moon.”

The launch of the demo satellites by SpaceX was a big success. They were deployed and are already communicating to Earth stations.

Musk also tweeted that the satellites will be beaming “hello world” around 9 a.m. Eastern tomorrow when they pass over Los Angeles, and the password to access that is “martian.” It’s unclear if that was a joke or not, but if it’s not, you still wouldn’t be able to access it from your phone or laptop. To access a communication from the satellite, you’d need a transmitter and receiver that can get the right frequency, and you’d need to be in the area where the satellite was transmitting the data. According to an FCC application, Tintin operated at 11-12 GHZ downlink and 13GHz uplink. Standard Wifi devices operate on a different frequency, typically 2.4GHz and 5GHz. So unfortunately, regular Wifi receivers won’t be able to access that. (Some people are also saying that Musk was just joking when he made those tweets, but we’ve learned to never assume with Elon Musk. Everyone thought he was joking about sending a Tesla into space too.) Ultimately, when Starlink is set up and the Internet is fully functional, you’ll be accessing the Internet through a special laptop-sized receiver.

Starlink is an ambitious plan by SpaceX to create a high-speed, global Internet for the entire world. Starlink is the current name for this plan, trademarked by SpaceX in late August 2017. The entire project could be up and running by 2024, if the current timeline holds. 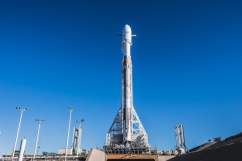