Today was the Falcon Heavy launch that the world has been waiting for. SpaceX launched the Falcon Heavy, a big step toward manned space travel, including ultimately sending a manned crew to Mars. If all goes well, today’s launch will carry Elon Musk’s red Tesla Roadster into a heliocentric orbit near Mars and beyond. As SpaceX explains: “Falcon Heavy was designed from the outset to carry humans into space and restores the possibility of flying missions with crew to the Moon or Mars.” You can rewatch the launch in the full video above.

So far, so good. The first part of the launch was a complete success. The side cores landed perfectly at Zones 1 and 2. The center core missed the drone ship, however. But two out of three isn’t bad.

Falcon Heavy side cores have landed at SpaceX’s Landing Zones 1 and 2. pic.twitter.com/oMBqizqnpI

What’s next for the Falcon Heavy? Here are the details. Now that the the three booster stages touched back on Earth, we will move on to the next stage. The mission will continue on an experimental long coast and third stage two burn. The long coast could last six hours through the Van Allen radiation belts. This leaves more things to chance, such as the fuel possibly freezing, oxygen vaporizing, and other issues that could hurt the rocket’s ability to reach trans-Mars injection. Problems at that stagemight mean that the Roadster doesn’t escape Earth’s orbit but burns up in the atmosphere instead. Or it might just end up orbiting Earth for a while.

If the coast stage is successful, the Roadster will then separate from the upper stage, targeting a heliocentric orbit. In other words, it will orbit the sun and be in close proximity to Mars during certain points of its orbit. The rocket’s payload stage will pop off the fairing’s two halves, exposing the Tesla Roadster. Yes, a bright red Tesla is indeed being sent off into space.

“It will be in an elliptical orbit with one part of the ellipse being at Earth orbit and one part being at Mars orbit, so it will essentially be an Earth–Mars cycler,” Musk said to Florida Today. “We estimate it’ll be in that orbit for several hundred million years, maybe even in excess of a billion years.”

The car will eventually travel even beyond Mars. And it’s carrying three cameras, so we got some pretty amazing live views: 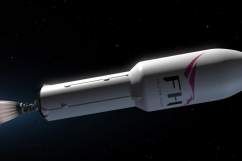