The Blue Yeti USB Microphone is easily the most popular microphone in the world today for online content creation, and it’s currently available in an awesome bundle for Cyber Monday. You can buy the mic today for $10 off and receive a free copy of Assassin’s Creed Odyssey on PC.

What Makes The Yeti So Good?

So why is it that the Blue Yeti is so popular? The answer comes down to three factors: its sound, its versatility, and its price.

In terms of sound, the Yeti records awesomely clear audio, with a signal to noise ratio of 100dB. Pair it with a pop filter (to block sharp plosive sounds) and a suspension microphone stand, and you’ll be able to record professional-grade audio with a rig that costs less than half of what many other mics cost.

In addition to the great audio quality, the Yeti also provides you with many flexible recording options that are useful for different kinds of material. The Yeti is made with three separate condenser microphone capsules spaced around the microphone, which gives you the ability to record using different pickup patterns. 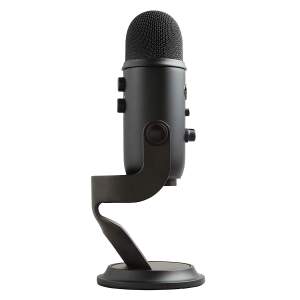 If you want to record a single-person podcast or video stream, for example, you could use the cardioid pattern, which picks up sound from directly in front of the mic but generally ignores sounds from the rear and far to the sides.

Alternatively, if you wanted to record a whole room or multiple people spaced around a room, you could use the omnidirectional pickup pattern, which uses all three microphones to create audio with an ambient quality.

A third useful pickup pattern is stereo, which allows you to record separate audio for the left and right channels. This is particularly great for musical or ASMR recording, as the stereo spread can make for a more interesting listening experience.

But perhaps the biggest factor in why the Yeti is so popular, is because it gives you all of the above at an excellent price. As stated earlier, the Yeti costs less than half of what many premium microphones cost while still providing extraordinary quality.

Especially at this Cyber Monday price, the Yeti is so affordable that even a novice content creator can feel good about purchasing one, and it’s so good that they will be able to happily use it for many years to come.

Is the Blue Yeti Easy to Use?

Yes! As a USB microphone, using the Blue Yeti could not be any easier. Simply plug it into your computer via the included USB cord, set the Yeti as your default recording device, and you are ready to begin recording. Yet another one of the Yeti’s many advantages is that it does not require you to use an external audio interface in order to connect it to the computer like most other microphones of this quality do.

Should I Get Any Accessories?

While the Yeti is great right out of the box, to get the absolute most out of it, I would recommend picking up a pop filter and a suspension microphone stand. The pop filter will help minimize the sharp plosive sounds caused by certain letters and make for more even audio, while the suspension stand will help to clear up the low mids that can sometimes get a little muddy when sitting directly on a desk. 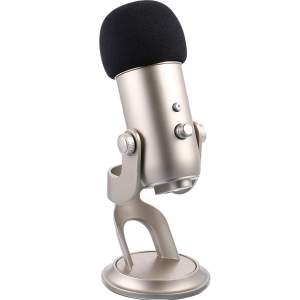 The cherry on top of this deal is the inclusion of a free PC copy of 2018’s Assassin’s Creed Odyssey. The latest entry in the incredibly popular Assassin’s Creed series, Odyssey puts you in the role of a Spartan hero in ancient Greece.

It’s a sprawling adventure with an excellent balance of history and mythology that was widely heralded by critics as a return to form for the Assassin’s Creed series. Aspiring video game streamers, in particular, should be excited about the game’s inclusion, as it could be the very first game that you stream with your new microphone!

If you aren’t sure about the Yeti, check out the other Cyber Monday microphone deals that are live right now.

Read More
Audio, Cyber Monday, Deals, Shopping, Tech
wpDiscuz
0
0
Would love your thoughts, please comment.x
()
x
| Reply
Grab a Blue Yeti Microphone on Amazon for $10 off and get a free copy of Assassin's Creed Odyssey on PC—now through the end of Cyber Monday.