There’s no denying that this year’s hottest toy is those cute, colorful monkeys that hug your fingers. I’m talking about Fingerlings. Of course, we here at Heavy.com have had these adorable little monkeys on just about all of our lists of the best toys of 2017, and we’re seeing them at the top of literally all of the other toy lists around the web as well.

That’s both good and bad, of course; it’s good that these toys are widely regarded as being great, but bad because that means the demand is at an all-time high and they’re going to be sold out at most stores when you actually go to do your Christmas shopping. 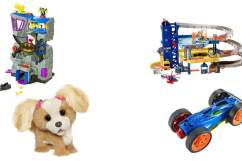 If you’re wondering where to buy Fingerlings right now, fear not — there are still some outlets (both online and in-store) that have them in stock. Unfortunately, as we get closer and closer to the biggest shopping day of the year — Black Friday — we’re going to see a lot of empty shelves and out of stocks for WowWee Fingerlings.

As it stands right now, you have to be super careful where you find Fingerlings in stock. There are a LOT (I repeat, a LOT) of knock-offs being sold on sites like eBay and Craigslist, and they can be hard to identify. So, just keep in mind that if the deal seems too good to be true, then it likely is.

There are still some places that have them in-stock (albeit at a higher price), and we’ve reached out to WowWee’s PR for stock updates and replenishment plans, so bookmark this post and check back later today for more information.

1. Amazon has Fingerlings…but at a higher price

You can still find Fingerlings from third party sellers on Amazon, and right now, the prices are starting at $37.20 (and rising quickly). It’s a bummer that you won’t be getting them at their original $14.99 MSRP, but if you’re willing to spend the money, you CAN still order Fingerlings online through Amazon and have them before Christmas.

You can even find the Gigi Unicorn Fingerling there, albeit at $71. Also, with Amazon having its own Pink Glittery Fingerling (Rose), we wouldn’t be surprised if they were holding stock to put up on Black Friday/Cyber Monday to get people in and shopping. We’ll keep you posted on that as well.

If you can’t find where to buy Fingerlings at your local stores, your second best bet is eBay. But I can’t stress this enough — BE CAREFUL! eBay is LOADED with knock-offs, so even though the item says “Fingerlings” in the title, they might not actually be from WoWWee. Your best bet is to buy from U.S. sellers only and avoid China like the plague of knockoff toys that it really is, and even then you can’t be positive you’re going to get actual Fingerlings.

However, you are able to find at least SOME Fingerlings in stock, albeit at a marked up price. Be sure to compare prices with Amazon.

You’ll find the Gigi Unicorn Fingerling selling for the highest price on eBay all season long, so don’t expect to see it go down in price at all. Prices will only be going up from here at this point.

I’ve already seen Fingerlings being sold on Craigslist and in local garage sale groups on Facebook. Obviously, they’re being sold at a premium. But, as is the case with eBay as well, BUYER BEWARE. If the seller is asking for payment first or to just ship you the item without meeting up and allowing you to inspect it, don’t do it — the seller is likely trying to scam you.

However, there are at least some honest people out there (sure, honest people trying to make a buck, but still honest, at least). The lowest I’ve seen in my own local circles is $50. So, be sure to check your own local Facebook groups and circles.

Target has been sold out of Fingerlings for weeks. However, last year, Target did a sort of rain check for the “hot” toy (Hatchimals). So, we’re wondering if they’re going to do the same for this year’s hot toy. We’ll keep you posted as we learn more.

You can sign-up to get in-stock alerts, but they’ve been out of stock for weeks as well.

Read More
Kids, Shopping, Toys
These illusive monkeys (and unicorn and sloth) are sold out in just about all major retailers that carry them, so you're going to have to venture into the deepest depths of the web to find them.