Whether you’re a glover (I guess that includes Childish Gambino, too!) or someone who just wants a sick party accessory, you’re here for the best LED gloves.

For the TLDR; version, our top pick is the GloFX Skittles LED Gloves. For the price, you’re receiving comfortable gloves, with different-colored LEDs in each finger. They’re a big step-up from cheap light up gloves.

How do we determine the best light up gloves? We consider the following:

Something else to keep in mind: Gloves with LEDs come in both children’s and adult sizes. So be aware of this, when placing an order.

As mentioned above, we aim to save you the most money. Thats’s why this list is set-up via price.

Below, you’ll find a handy list of links, along with prices. Click on one you’re interested in, and it’ll bring you to the capsule to dive in for more information. Or, go directly to purchase them.

What are the best LED gloves? 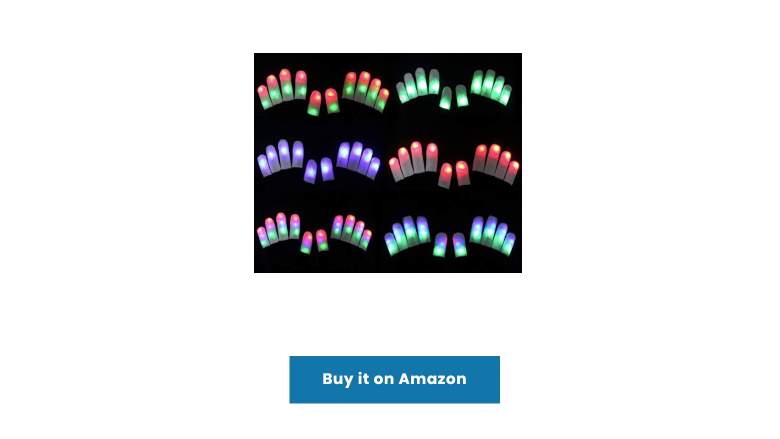 When you’re looking for a pair of LED gloves, you should never settle-for-less. In other words, just because it’s cheap, doesn’t mean you shouldn’t receive something quality.

These Amazer Light Gloves give you incredible bang for your buck. For under-$8, you’ll receive a pair of gloves, installed batteries, and a pair of backup batteries.

Once you flip them on, you won’t be disappointed in their mesmerizing light show. It comes fully loaded with seven colors, including:

And, it flashes in an impressive six modes, like:

As for the gloves themselves, one-size-should-fit-most-adults, both men and women.

Before you use them for the first time, remove the insulated pull tab on the battery pack.

Cheap LED gloves are about to make you pleased as punch. 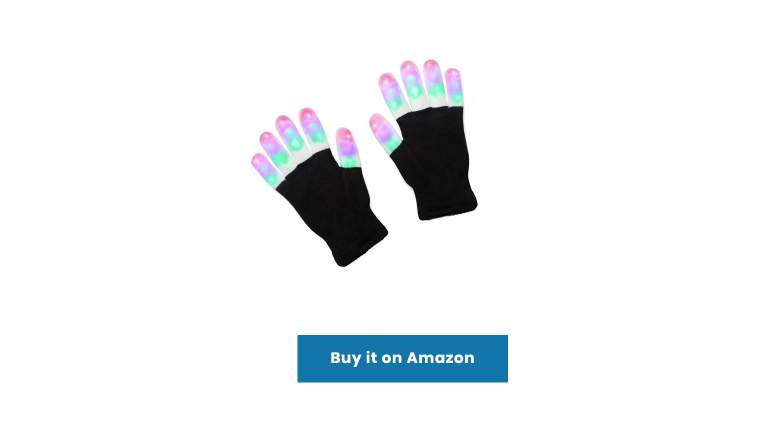 When it comes to finding the best light up gloves, there are a number of ways to determine said “bestness”.

In this situation, we’re going with Amazon’s opinion. After all, they’re the world’s largest retailer, so why not go with their pick?

These Vitalismo LED Gloves are your best bet, according to Amazon. With over-270 5-star-reviews, the masses would agree.

Switching modes is easy, with a literal click of a button. The lights shine brightly, once you flip them on.

These gloves shine in three colors:

And, it’s loaded with six modes, including:

As for the gloves themselves, they’re made with a blend of stretch nylon, spandex, and cotton.

One-size-should-fit-most, with the addition of an elastic band, for a snug fit. 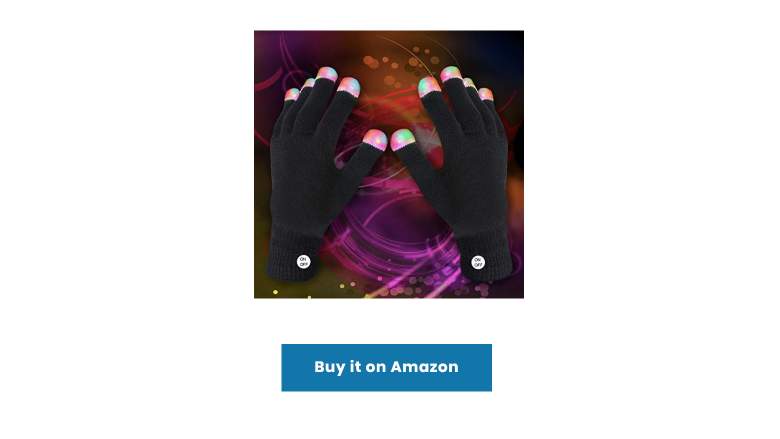 When it comes to light up gloves, there are a number of uses for them. First, of course, is pure fun. Second, is as a flow toy, by creating a beautiful light show.

If you’re interested in the latter, you’re looking for LED gloves, where only the tips are lit up. The Fun Central LED Gloves are your best bet.

The cool thing about this pair, is that each fingertip is loaded with three LEDs:

They come loaded with an impressive eight modes, including:

In terms of the actual gloves, they’re comfortable and stretchy. One-size-should-fit-most.

Put on a unique light show, with this awesome LED pair of gloves. 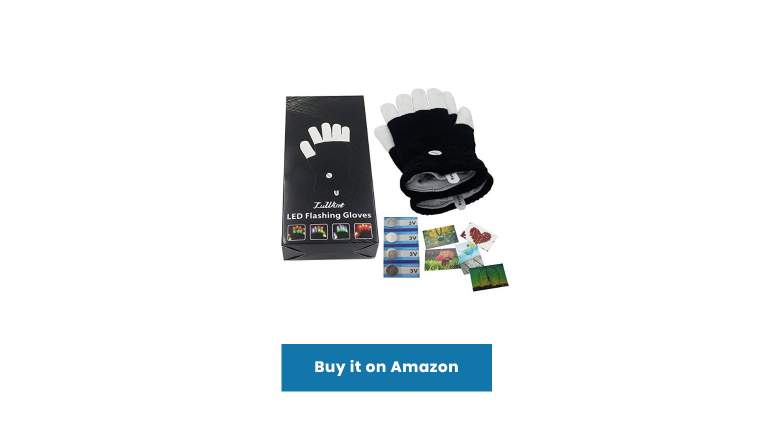 When you’re purchasing a cheap light up pair of gloves, you have to keep in mind they’re, well, cheap.

But, that doesn’t mean you shouldn’t always be on top of safety. Luckily, the producers of Luwint LED Flashing Gloves agree.

Their top priority is your safety, thanks to their use of high-quality electronic devices.

The gloves flash in an impressive seven colors, while cycling through six different modes. Switching between modes is a quite literal press of a button, handily located on the wrist.

Whether you’re a large person, or a big kid, these gloves are a comfortable fit. They’re made with a very stretchy, well-structured material.

Should you end up hating these gloves, you can send them back for a no-questions-asked-guarantee for the first-three-months. 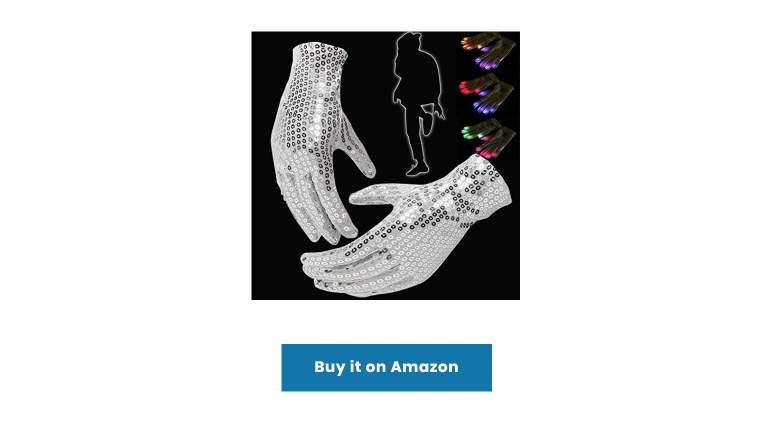 Take a step back for a second, and think about all of the light up gloves you’ve ever seen in your life. They all look pretty similar, right? Like that basic knit glove look?

Yeah, it gets overplayed after a while. But, how exactly do you spice up a pair of gloves with LEDs?

With some dang sequins, of course! These LED Rave Sequins Gloves are totally what you’re looking for.

The gloves themselves are crafted with polyester and cotton, and are covered to high-heaven in sequins.

They’re powered by two CR2032 batteries, although they’re not included. Remedy that, by purchasing some here.

It lights up in a brilliant seven modes, including:

Switch between modes with ease, with the click of a button, on the wrist.

These sparkly light up gloves are like compliment magnets–you’ll have a blast with them. 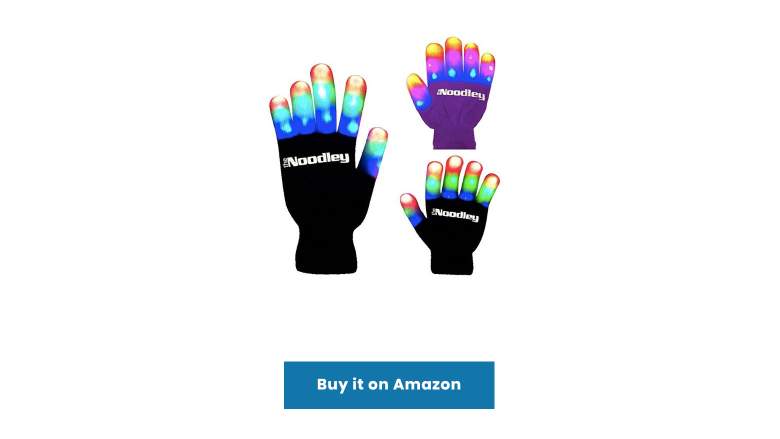 As I already mentioned in the capsule above, most glow gloves are made with the same basic knit glove.

If sequins aren’t your thing (and they’re obviously not for everyone), then changing up the color of the glove is a great route to take.

Luckily, The Noodley LED Gloves cater to that desire.

Moreover, they’re not just a manufacturer of LED glove options for adults. Instead, they have a great line of kids light up gloves, too.

Adult gloves are available in purple, while kids gloves come in pink, purple, and white.

In terms of the actual LEDs, they flash in three colors:

And, they flash in six types of modes, including:

These babies are powered by two CR2016 batteries, which are pre-installed. You’ll also receive a backup set.

When they arrive, remember to remove the battery tab.

Kid or adult, these are a great choice in glowing gloves. 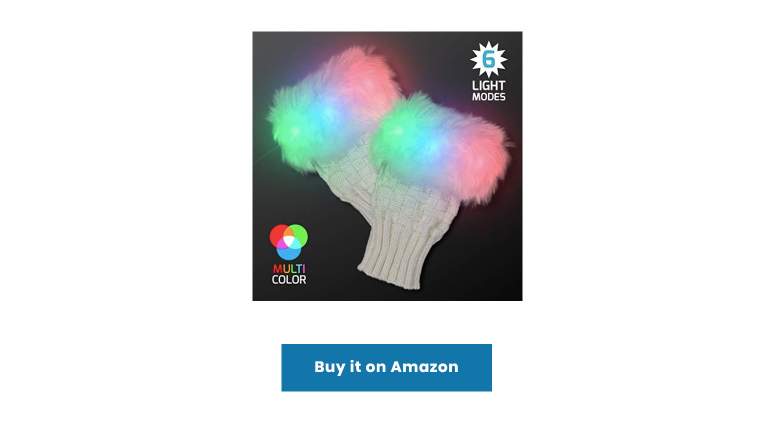 When I say the phrase “light up gloves”, you probably think of full-fingered gloves, with the LEDs housed in the fingers.

While that’s usually the kind of LED glove you’ll encounter, they’re not the only kind. Light up fingerless gloves do, in fact, exist.

Instead of rocking a pair of typical glow gloves, change up your look with these Fuzzy Fingerless Glow Gloves.

They’re loaded with six different light up settings, including:

And just in case you’re worried about figuring them out, the instructions are so straightforward, a kindergartener could do it.

Safety and uniqueness meet in this pair of LED fingerless gloves. 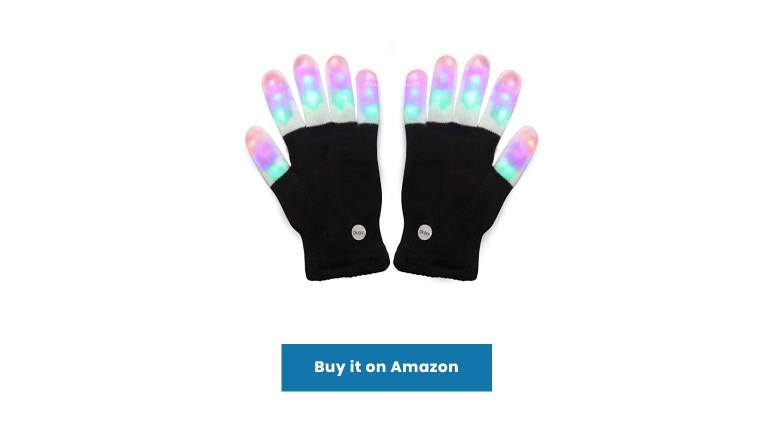 The more you travel up the LED-glove-scale, the higher the quality you’ll receive. What’s an increase in quality, though?

For one, the LEDs shine more brightly. So, you can perform more brilliant light shows. Second, the LEDs themselves are a higher quality, which means they last longer before burning out.

So, if you’re looking to take a tiny step up, in terms of gloveuxry (glove + luxury…I know, dorky), then you need the Tritechnox LED Gloves.

When you flip on these quality gloves, you’ll be thrilled with their brightness.

It’s pre-programmed with six modes, including:

The gloves themselves are made with polyester, and promote breathability. That means you can wear them to outdoor shows, without sacrificing your hands to the sweat gods.

An elastic band sits on the wrist, for stretchiness. In turn, this keeps them solidly on your hands, without any unwanted slippage.

Unlike other gloves on this list, the battery is nestled in a pouch inside the glove. This promotes comfort for long-term wear.

Whether you’re at an EDM show, or just playing with some kids, these light up gloves are a solid choice.

Oftentimes, the use of glow gloves is associated with raves accessories. It’s an extremely accurate association, so you know what that means: Rave companies are on the list.

If you know anything about flow toys (and it’s totally ok if you don’t), then you probably know the name GloFX.

They produce quality light-up products, which you’ll often see for sale at shows and festivals. Well, there’s a reason their “Skittles” glove set made the list.

As I mentioned above, the more you spend on a pair of gloves that light up, the more you can do with them. In the same vein, quality and quantity of LEDs go up, too.

On top of that, though, investing slightly more means you have more glow options. Instead of each finger being loaded with the same red, green, and blue LEDs, these babies have a twist:

Because each finger contains different-colored LEDs, your light shows have an entirely new dimension.

The batteries are included, and provide about 10-hours of glow. Replacing them is a cinch.

These GloFX gloves are your first step towards elite gloving models. 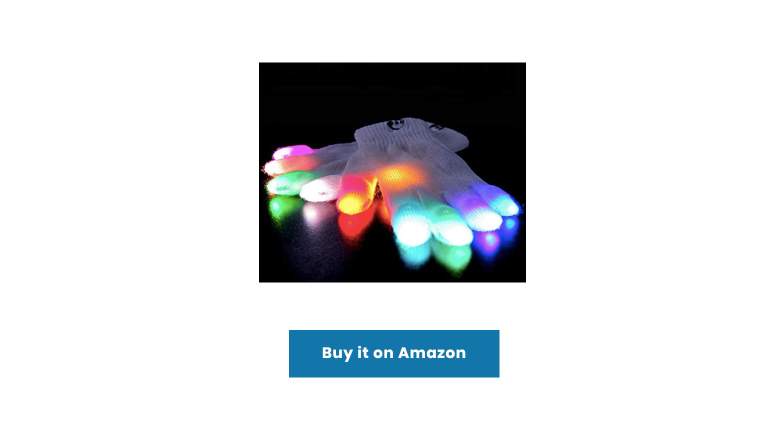 Alright, alright, I know. Above, you saw that we’re covering eMazing Lights twice. But, they produce such high-quality LED gloves, they’re worth mentioning twice.

While the pair of GloX gloves from above are amazing, these EmazingLights eLite Chroma LED Gloves really take it up a notch.

With five pre-programmed light modes, you have the ability to create brilliant light shows. Customize the modes with the click of a button.

Take it up a step further, by controlling the LEDs’ brightness. Tint Control is an all-new feature, which also allows you to personalize the order of modes, too.

As you’d expect of a luxury light up glove, its installed with 20 CR1620 batteries. But, they’re also compatible with 1616 batteries, too.

Should the unfortunate happen, you can send these hand covers back with a lifetime warranty.

EmazingLights is, well, amazing. Happiness is just a glow glove away. 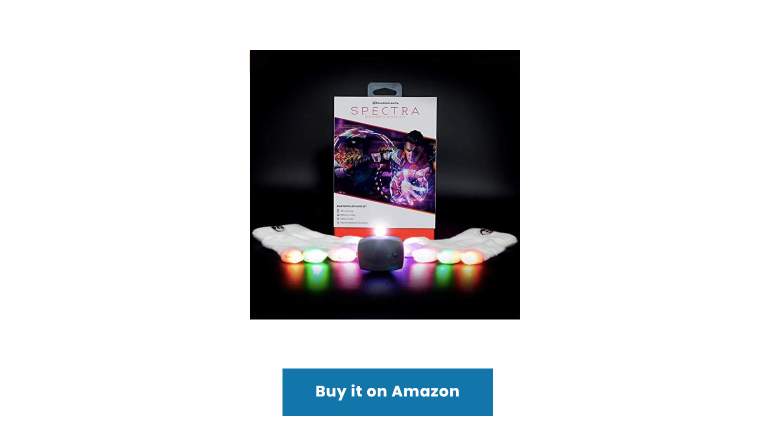 Look, if you’re a glover, you truly know the importance of a solid set of gloves. You could spend a bit less money, but that reduces your quality and LED color selection.

You already know you enjoy this type of flow. Invest in a pair of phenomenal gloves, that’ll last for years to come. In fact, by opting for a top-notch pair of LED gloves, you’ll end up saving money over-time.

That’s because you’ll no longer be buying a new, not-so-quality pair every-so-often. In the long-run, these semi-frequent purchases add up.

Your best bet is to consider the EmazingLights eLite Spectra LED Gloves.

Yep–they’re made by the same guys as above. They’re a well-respected producer of flow toys, and are backed with an impressive lifetime warranty.

Aside from the incredible 48 pre-installed patterns (25 of which have never been released before!), what makes them stand out is their bluetooth capabilities.

In fact, they’re the first bluetooth-compatible light-up gloves on the market. And, they come with an app–iOS and Android–to make programming a snap.

Instead of just a few colors, you have access to millions of them. With the EmazingLights eLite Spectra LED Gloves, you literally create your own palette–entirely unique to you and your flow.

With the aforementioned pre-programmed modes, you have the ability to edit them with options, like:

On top of that, these babies are fully-loaded with Flux Motion Reactive Accelerometer. In other words, these gloves react to your moves, moving in-sync with you.

Naturally, the batteries are replaceable. You can use both 1616 and 1620 batteries.

While these gloves may not be the best choice for most people, if you’re serious about gloving they’re, without a doubt, the best LED glove for your flow.

wpDiscuz
0
0
Would love your thoughts, please comment.x
()
x
| Reply
LED gloves are available for every budget. We've put together a list of the best light up gloves, ranging from basic-to-ultra-luxury. Snag a pair today!