Buy it on Amazon here.

For any of you who pay attention to social media, you may have noticed yesterday that the Twittersphere was abuzz with the new Nerf Ultra One blaster — the newest line of Nerf guns that was just announced.

What Is the Nerf Ultra One?

The Nerf Ultra One is the first product in the brand new Nerf Ultra line first announced in late 2019 that introduces a brand new type of darts (properly named Ultra Darts, of course).

What Are Ultra Darts?

Ultra Darts are the toy company’s farthest flying darts to date, firing up to 120 ft with ease. They also have a unique flight tip design and use aerofin technology to reach that impressive distance.

When you first pick-up one of the new Ultra Darts, the first thing you’ll notice is that they’re significantly harder than the typical Nerf foam darts. This is so that they can fly further while still using ultra light materials. 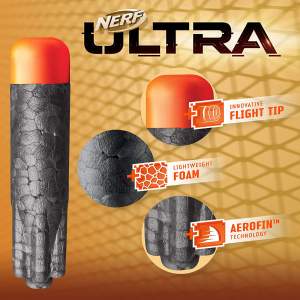 As far as the physical design of the Nerf Ultra One is concerned, you’ll notice it fits right in with the rest of the Nerf gun designs we’ve seen in the past; there’s nothing too crazy looking going on here. It does, however, use the rarely-implemented drum design akin to the Doomlands Lawbringer but slightly bigger, like The Judge. It also utilizes the common white, orange, and yellow colorway, and the barrel has the word “ULTRA” prominently featured for all to see.

The drum is motorized and has a high-capacity, holding up to 25 of the new Ultra Darts per round. On the side of the blaster, you can also find onboard dart storage that holds up to 8 more darts for ultra-quick reloading.

The Nerf Ultra One blaster has an MSRP of $49.99 – which is right in-line with the rest of the similarly-sized Nerf guns on the market right now.

The recommended ages for the Nerf Ultra One are 8 years and up.

What Type of Batteries Are Required?

The Nerf Ultra One requires four C alkaline batteries for the motorized drum.

Where to Buy the Nerf Ultra One Blaster

The new Nerf blaster is available on Amazon, Target, and Walmart — and they’ll make their way to other retailers before the holiday season, I’m sure.

When Is the Ultra One Blaster Going to Ship?

It looks like the new Nerf Ultra One Blaster is set to ship on October 1, 2019 – at least, according to the Amazon listing where you can pre-order it.

What Parents Need to Know

The most important thing you need to know about the Nerf Ultra One Blaster is that it won’t shoot any darts made by any other manufacturer other than Nerf. On top of that, it won’t work with the Nerf darts you already own, since Ultra Darts are entirely new.

This isn’t a dealbreaker, no — but it’s an important aspect of the Ultra One that most might not think of when thinking about buying it for their kids.

The Official Nerf Ultra One Commercial