18650 batteries are used in a wide variety of devices. For all of their differences, though, they all require the same type of charger. Unfortunately, not every 18650 battery charger is made equally. Some are expensive without a good charge, and others are cheap with a quick charge.

When it comes to vaping, batteries are arguably the most important aspect. After all, without a power source, how the heck are you actually supposed to vape? And if your battery drains too quickly, or takes too long to charge up, you could be left high and dry. Who wants to leave the house without your vape kit in-hand?

This list is set up in no particular order. Rather, each capsule is defined by a specific characteristic. While there is an overall best 18650 battery charger, there are loads of other amazing models, too.

When it comes to 18650 chargers, there are a few necessary qualities, to dub it the “best overall charger”. First, it must be fast. Ain’t nobody got time for waiting on chargers. Second, it must show battery percentages–this gives you a more precise reading. And third, it must have both temperature and internal resistance protection.

I want to thank the team over at Xtar for sending me an Over 4 Slim charger to review. Honestly, I really am not picky about chargers, but this bad boy knocked my socks off. Just today, I popped it in to the charger at 32%. In under 22-minutes, it was fully charged. If I hadn’t been nearby to remove it from the charger, the unit would’ve automatically cut off at 4.2V. In addition to temperature protection, it also boasts reverse-polarity, short circuit, overcharge, and overheat protection. For more information, you can check out the manufacturer’s website here.

Buy the Xtar Over 4 Slim here.

2. Best 18650 Battery Charger Doubling as a Battery-Reviver: XTAR VC2 Plus

Phew, that was a heckuva title. As wordy as it may be, it’s a fantastic quality in an 18650 charger. Over time, all batteries begin to lose their life. Instead of purchasing new ones, using a charger that revives old batteries saves you quite a bit of cash.

Xtar actually sent me a unit to review, and the XTAR VC2 Plus blew my expectations out of the water. I have a few enail batteries that were heading down the path of no return…aka battery death. Once I popped them into this device, they charged significantly more than usual–I was quite pleased. Aside from the reviving qualities, this unit cuts off at exactly 4.2V, in order to mitigate overcharging. Plus, current buffering technology prevents damage from violent currents. An LED display shows you how much charge is currently in the battery, and how long until it’s fully charged. For a great price, you’ll be pleased with this 18650 battery charger.

Buy the XTAR VC2 Plus here.

On top of its impressive compatibility with multiple battery types, it also has the ability to charge your phone or tablet, as well. Charging up-to-four batteries at once, you can’t go wrong with the Efest Luc V4 Charger.

Buy the Efest Luc V4 Charger here at Vapor4Life and enter promo code Heavy for 10 percent off your order, plus free shipping.

18650 battery chargers seem like they should all be pretty similar. But, don’t fall into that trap. They’re extremely varied in their charging abilities.

The Nitecore Intellicharger I2 18650 Battery Charger charges two batteries at-once. A display screen shows you how much each individual battery has been charged, so you know exactly when to take each one out of the device. Plus, it includes over-charge protection, and reverse polarity protection. This 18650 battery charger is an easy choice.

Buy the Nitecore Intellicharger I2 Dual 18650 Battery Charger here at Vapor4Life and enter promo code Heavy for 10 percent off your order, plus free shipping.

In addition to a speedy charge, it’s also a smart charger, which automatically detects a battery’s charge status. You’ll be hard-pressed to find a better 18650 battery charger. 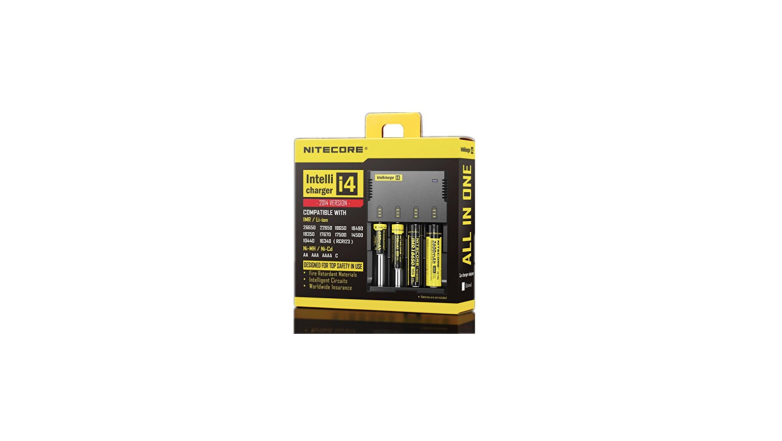 As you saw above, Nitecore is a phenomenal choice when it comes to 18650 battery chargers. Their two-battery charger is fantastic, but their four-battery capacity really brings it up a notch. Each battery is monitored individually, so you’ll never overcharge anything. It automatically stops charging, when full-capacity is reached. Moreover, this set-up comes with a car charger. You can literally charge your 18650 batteries from anywhere.

Buy the NITECORE i4 Intellicharge here.

18650 battery chargers and batteries are often sold separately. This, of course, can make things a bit more expensive. In order to cut down on some costs, snag a battery charger that comes with 18650 batteries, as well. The EBL 18650 Charger with Lithium Rechargeable Batteries is exactly what you need.

It comes with two 18650 batteries, and the charger is compatible with all lithium ion batteries. When they’re fully charged, the charger will flip from a red-to-green light, indicating they’re ready. You won’t find a charger and battery set for a better price. 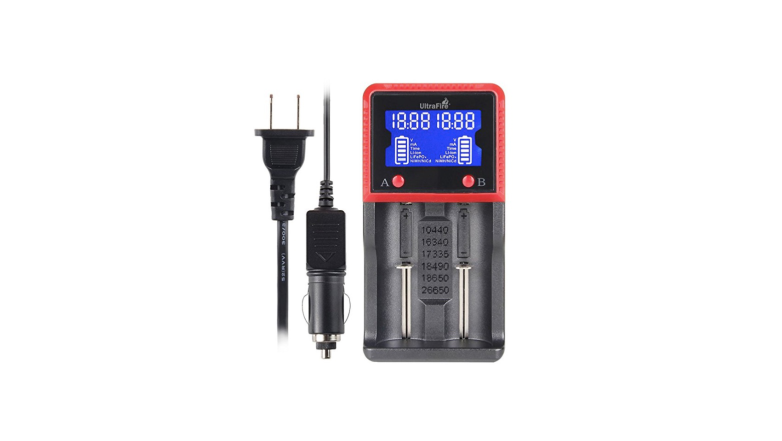 When it comes to 18650 battery chargers, there are a few qualities you want to see. I could mention a lot of them, but we can universally agree upon one: Quick charging. Luckily, the UltraFire Universal Battery Charger has that exact quality.

Plus, it also has smart LCD screens, which display each individual battery’s charge. And, it identifies the battery type, in order to appropriately charge it, based on the model. Without a doubt, the UltraFire Universal Battery Charger is a phenomenal choice.

As far as battery chargers go, they don’t tend to have a lot of bells and whistles. Sure, offering safe charging is a must, but it’s not really “cool”. Well the 18650 Battery Charger Box defies that notion.

It charges up to four batteries at-once–but it’s uniquely designed, aesthetic-wise. And, it has two USB chargers, so you can charge your iPad or phone at the same time. Without a doubt, the 18650 Battery Charger Box is a battery charger you should consider.

Most 18650 battery chargers allow you to charge a single battery, two batteries, or four batteries. But, there are times where you need the ability to charge more than four.

An 18650 battery charger is great…until it dies in an emergency situation, and you’re really stuck. Well, the 2-Bay Smart Battery Charger for 18650 has a back-up, just in case.

If for some reason the voltage drops, simply remove the battery two-to-five minutes, and reinstall it. It’s compatible with 18650 batteries (as well as scads of other types), and has a USB port to charge your phone. If you’re worried about the future, the 2-Bay Smart Battery Charger is for you.

This bad boy allows you to choose between 0.5A, one-A, and two-A for 3.7V cylindrical lithium batteries. Thanks to overcharge protection, your battery won’t be ruined if you leave it in the unit for longer-than-intended. And, it’s also compatible with a wide range of batteries (sans AA and AAA). For a custom charging experience, the 4-Slots Intelligent Universal Battery Charger is at the top of the list.

Battery chargers have a ton of awesome qualities. They quite literally power your life. But, most require a source of power themselves, often via an outlet. So when an 18650 battery charger doubles as a power bank, it turns your head a bit.

The Zanflare C4 Smart Charger does just that. With a two-A output capability when you install two batteries, you’re powered on-the-go. Plus, you can choose from four current options: 300mA, 500mA, 700mA, and 1000mA. And, each of the four charging docks allows you to charge independently. A two-year warranty keeps you covered, in case something goes wrong. You’ll be hard pressed to find a more well-rounded 18650 battery charger.

If you’re a heavy vaper, or just prefer to get all of your charging done in one full swoop, you may want to consider a bulk charger. We saw the six-bay charger above. But, you can really take your charger up a notch with an eight-bay charger.

The NITECORE i8 will knock your socks off. This bad boy is compatible with a wide variety of Li-ion, IMR, and LiFePO4 batteries. Each bay is independent, to ensure proper charging. Use it as a two-port USB charger, if need be. And, it comes with an EdisonBright BBX3 battery carrying case. Add in a few 18650 batteries, and you’re ready to go.

Buy the NITECORE i8 here.