There’s nothing like ripping open presents on Christmas morning and finding totally fun Nerf toys inside. Plenty of Nerf blasters are on sale for Black Friday week and we’ve listed the best ones below.

Why wait until Friday to take advantage of amazing Black Friday deals this year? Nerf is on sale for the entire week and ready for you to cross off your holiday shopping lists. Now’s your chance to score big with savings on Nerf blasters, darts, and accessories.

Some deals may have ended but click for more Cyber Monday bargains.

Save 50% on the Nerf Infinus N-Strike Elite 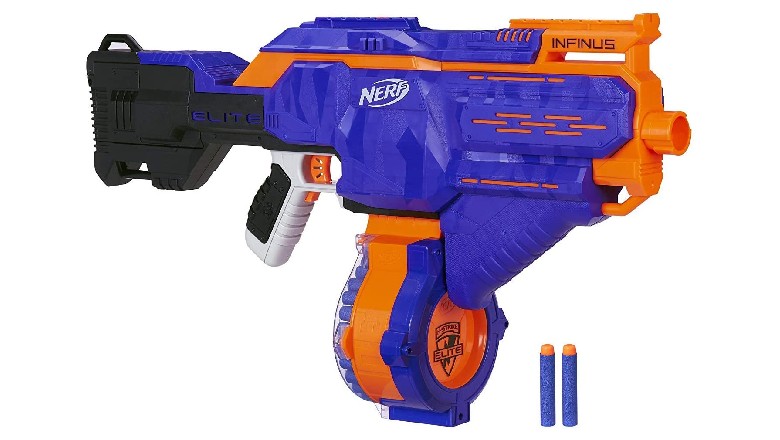 Get ready to blast into action with the Nerf Infinus N-Strike Elite Blaster. On-the-go dart loading means non-stop battling (and a leg up on the competition). The Infinus features a drum magazine that is motorized and loads darts automatically from the chamber. Oh, mama.

The drum stays attached to the blaster so there’s no need to remove the drum for reloading…which means you can get back to blasting the bad guys all that much faster. The drum can hold 30 darts at a time which are included with the Infinus.

The blaster is compatible with most other Nerf N-Strike Elite drums and clips (sold separately). Are you ready to crush your opponents with a relentless barrage of Nerf darts? Then let’s get crackin’.

Save 50% on the Nerf Infinus N-Strike Elite 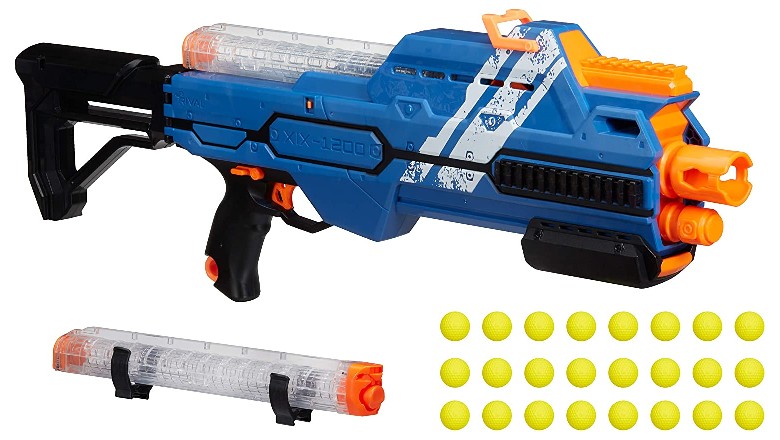 This Nerf blaster has a 12-round capacity and includes two magazines and 24 high-impact rounds. Load one magazine into the blaster, and store the second magazine on the blaster with the two clips that attach to a tactical rail. Move the magazine release to remove the empty magazine when it’s time to reload.

To fire, move the pump handle backward and forward, and pull the trigger to unleash one round at a quick velocity of 100 feet per second. Safety first: the blaster features a locking trigger to prevent it from firing accidentally.

Save 26% on the Nerf Rival Takedown XX-800 Blaster 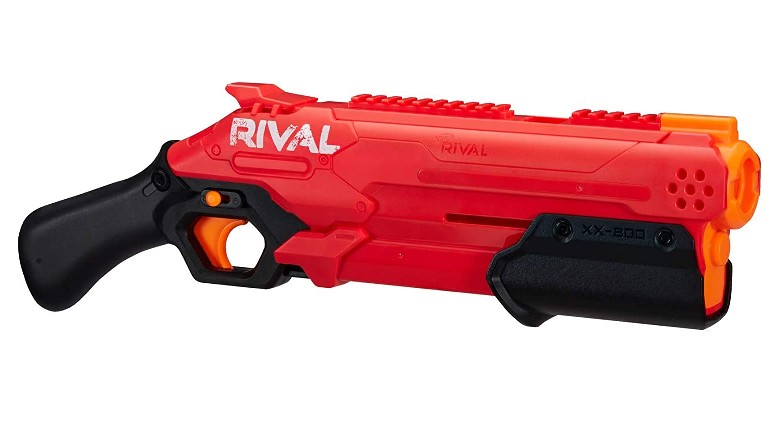 Take on and take down every challenger in the neighborhood with the pump-action Nerf Rival Takedown XX-800 Blaster. Load this spring-action blaster, pump the priming handle, and press the trigger to fire a ping pong ball-sized round.

The Takedown XX-800 blaster has an eight-round capacity and the ability to launch each round at 90 feet per second. Yikes. It’s easy enough to operate; just pull the handle back to open the breech, load eight balls into the chamber, push the handle forward, then press the trigger. Move the handle backward and forward to prime the blaster for the next shot.

No worries about safety: a trigger lock prevents the Takedown XX-800 from firing accidentally, which could be awkward. Includes eight official Nerf rounds. Consider picking up this Nerf Rival Face Mask to be safe and look cool doing it.

Save 26% on the Nerf Rival Takedown XX-800 Blaster

Save 15% on the Nerf Fortnite GL Rocket-Firing Blaster 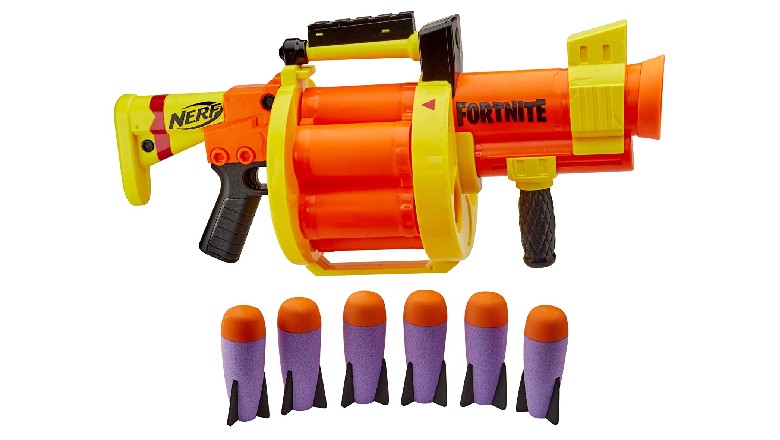 This rocket-blasting nightmare is inspired by the weapon used in Fortnite, capturing the look of the blaster used in the video game perfectly. Forget about darts or foam pellets; this big boy blasts big, big Nerf “rockets”. They shoot one at a time from the rotating drum which holds up to six of the huge foam darts.

The Nerf Fortnite GL Blaster features pump-fire action. Move the handle to fire each rocket by pushing the handle forward. This rotates the drum to place a rocket into position. Pull the handle back to launch.

The blaster includes six official Nerf rockets to load into the drum. I’ve got to be honest here: with the Nerf Fortnite GL Blaster, it’s going to be tough to find anyone willing to compete against this massive amount of foam firepower.

Save 20% on the Nerf Fortnite Gl Rocket-Firing Blaster

Save 40% on the Nerf Fortnite AR-L Elite Dart Blaster 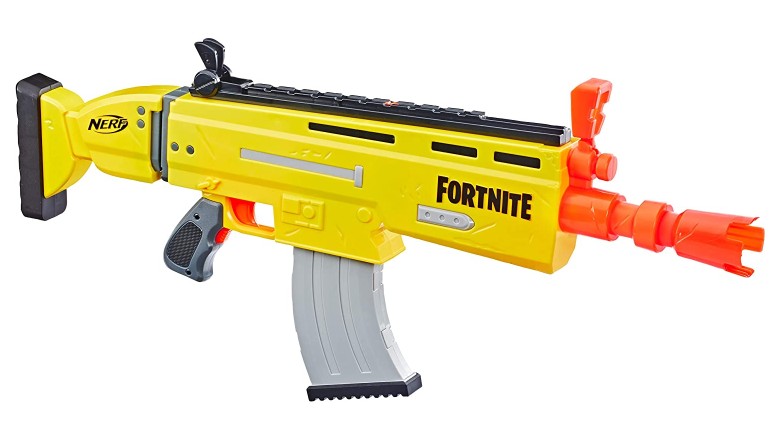 This little motorized mama is capable of catching combatants unaware with high-speed dart blasting action. Hold down the acceleration button to power up the motor, take aim at a target, and pull the trigger. Darts fly fast and furious with this yellow number.

The Nerf AR-L comes with a ten-dart clip and 20 official Nerf Elite darts, giving you enough darts to fully load the clip with ten left for reloading. Two flip-up sights on top of the blaster will help the user dial in the shot.

Darts are made with superior Nerf quality. They’re made with foam with flexible, hollow tips which are fun to blast both indoors and out. The darts are compatible with all Nerf Elite blasters as well.

Save 40% on the Nerf Fortnite AR-L Elite Dart Blaster

Save 36% on the Nerf Fortnite SP-L Elite Dart Blaster 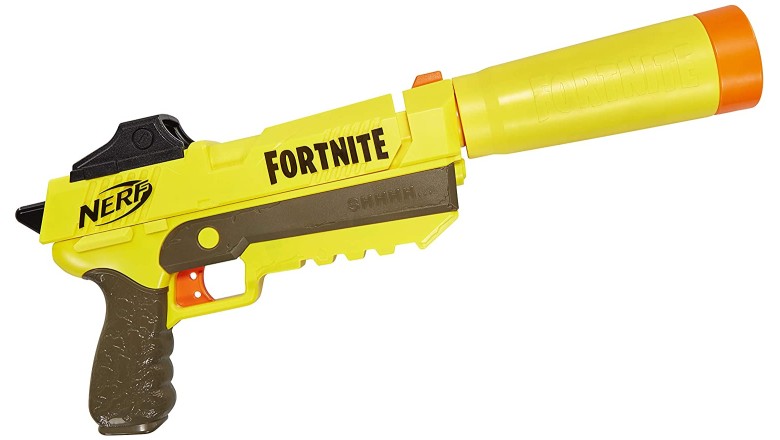 Perhaps something a little smaller and sporty is more your style? The Nerf Fortnite SP-L Elite Dart Blaster looks like the one from the popular Fortnite video game but this is real life, friends. It has a detachable barrel to customize different ways of hitting your target.

Attach the barrel for distance targeting or remove it when you need to fire fast and furious. The blaster has an internal clip with a three-dart capacity. Insert three darts into the SP-L, prime, and pull the trigger. It’s totally fun and you’ve got to love that yellow color scheme.

Save 36% on the Nerf Fortnite SP-L Elite Dart Blaster

Save over $5 on the Nerf 10-Mile Walkie-Talkies Set 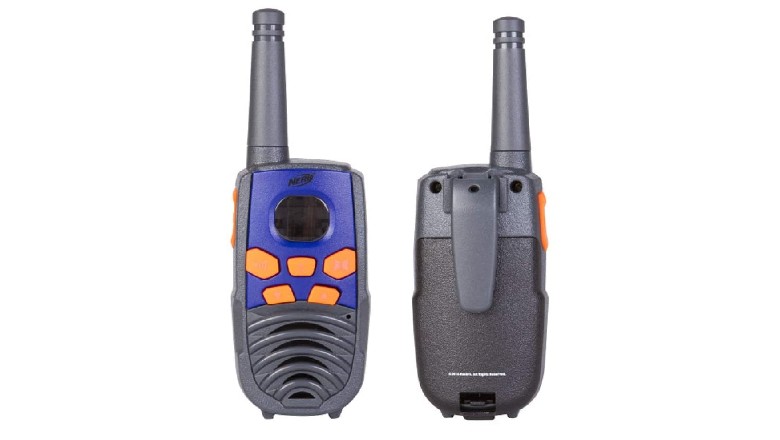 If you’re fighting evil and saving the world, it’s important to have communication in place with your team. This Nerf Walkie Talkies Set is a great accessory for any outdoor explorer or hardcore Nerf player.

It features up to 10 miles of range using high-quality transmission antennas for crystal clear voice communication across rugged terrain. The walkie talkies are also durable, making them good for kids that love the outdoors because, you know, kids break things.

The red and orange color scheme fit right in with any Nerf blaster, too. From the backyard to the hiking trail, this Nerf Walkie Talkies set will provide excellent communication anywhere you and your buddies go.

Save over $5 on the Nerf 10-Mile Walkie-Talkies Set

Save 28% on the Nerf Fortnite RL Blaster 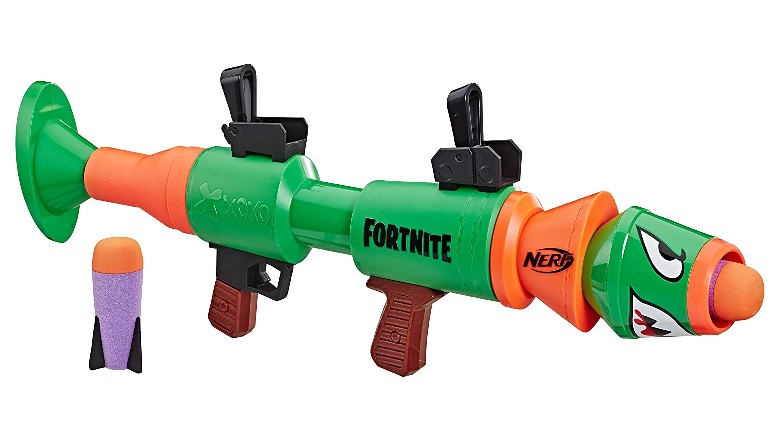 Take video game action into real life with the Nerf Fortnite RL Blaster. This foam rocket-launching blaster allows the user to load, prime, and fire in three quick steps with no batteries required.

Two official Nerf rockets are included and made of high-quality foam with flexible, hollow tips. Show your opponents that you’re ready to take the day with this impressive

Save 28% on the Nerf Fortnite RL Blaster

Save  38% on the NERF Fortnite SMG-E Blaster 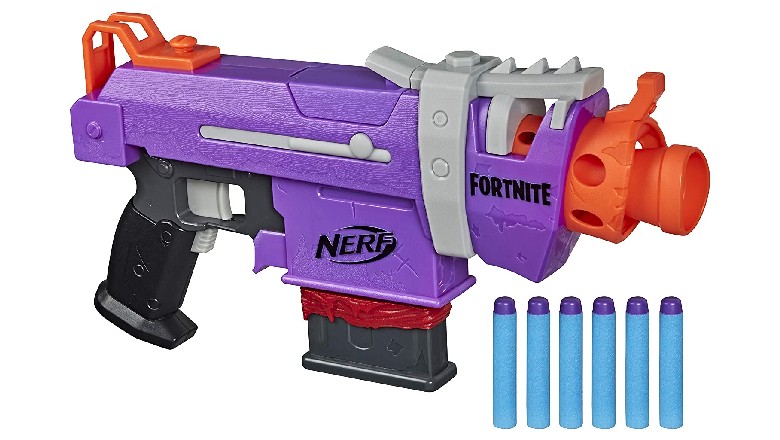 The Nerf Fortnite SMG-E Blaster looks resplendent in purple but you’re not picking this up for a Nerf battle for its looks. It includes a six-dart clip and six official Nerf Elite darts made of typical high-quality Nerf foam, approved for performance, with flexible, hollow tips.

The single-dart firing blaster features an acceleration motor to whip each round out with some pep. Power up the acceleration button and press the trigger to unleash the fury against your buddies. Load the clip, start the motor and let the fun fly.

Save 38% on the Nerf Fortnite SMG-E Blaster

Save 42% on the Nerf Zombie Strike Revoltinator 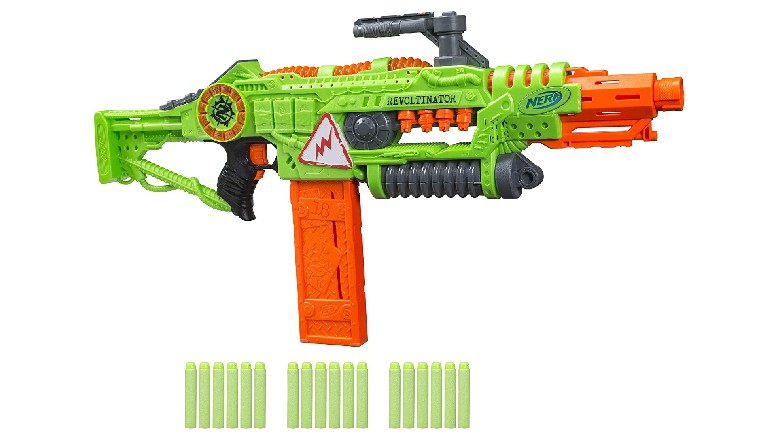 With power shock lights and sounds, the Nerf Zombie Strike Revoltinator will electrify all the zombie-fighting fun. This crazy green blaster features a motor that can be revved up to fire Nerf darts out the barrel with amazing speed.

The Revoltinator includes an 18-dart clip and 18 official Nerf Zombie Strike Elite darts designed for distance with flexible, hollow tips. When the blaster is powered up to fire, lights flash and glow all over the housing for some extra fun punch.

Save 42% on the Nerf Zombie Strike Revoltinator

Save 25% on the Nerf Fortnite SR Blaster 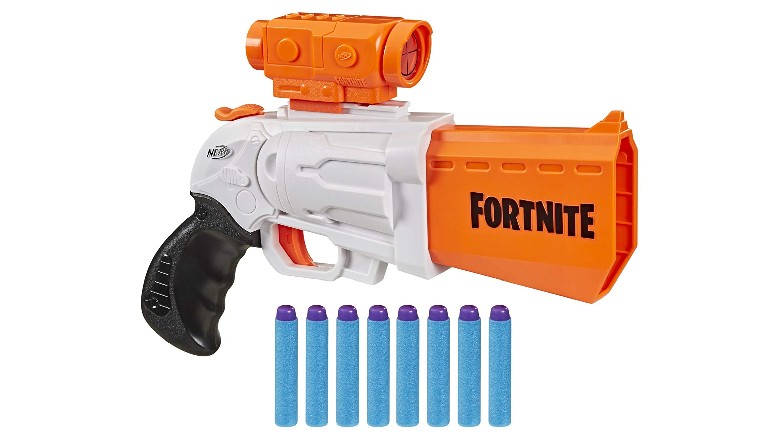 With four-dart hammer action, the Nerf Fortnite SR Blaster is a great sidearm to have at your…er…side during a Nerf mission. Load four darts (it comes with eight) into this little beauty, pull back the hammer, and squeeze the trigger to watch one of those blue crazies fly.

The SR includes a scope that you can attach or remove to help line up your next shot. Think you’re tough enough to fan that hammer like a real outlaw? With the Nerf Fortnite SR Blaster, you’ll get nice and rugged in a real quick fashion.

Save 50% on the Nerf Fortnite SR Blaster

Save 26% on the Nerf Rival Charger MXX-1200 Motorized Blaster 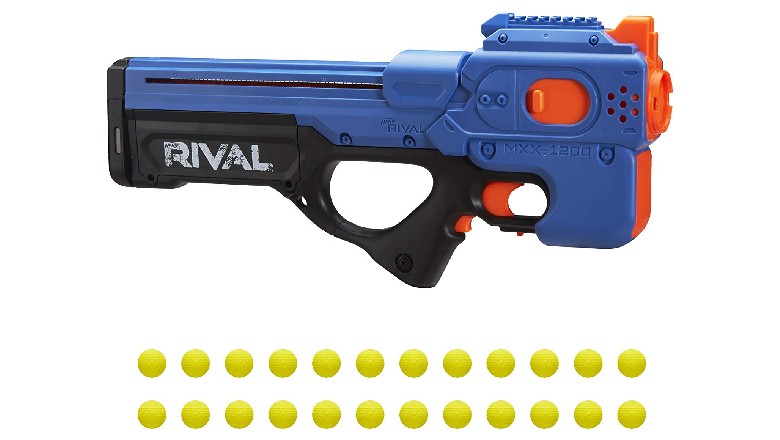 Rev the motor and figure a dozen rounds in a row with the Nerf Rival Charger MXX-1200 Motorized Blaster. This blue bolt of boisterous Nerf action will power you into the battle in no time at all. Hold down the accelerator button and slowly pull the trigger. NICE.

24 Nerf Rival rounds come with the MXX-1200 so you can load 12 rounds to take on any challengers with 12 left over for reloading inventory. It never hurts to have more rounds on hand, however. The yellow Nerf rounds come out at a blistering 100 feet per second, allowing you to quickly overwhelm your oppressors.

Save 26% on the Nerf Rival Charger MXX-1200 Motorized Blaster

Save 20% on the Nerf Fortnite HC-E Mega Dart Blaster 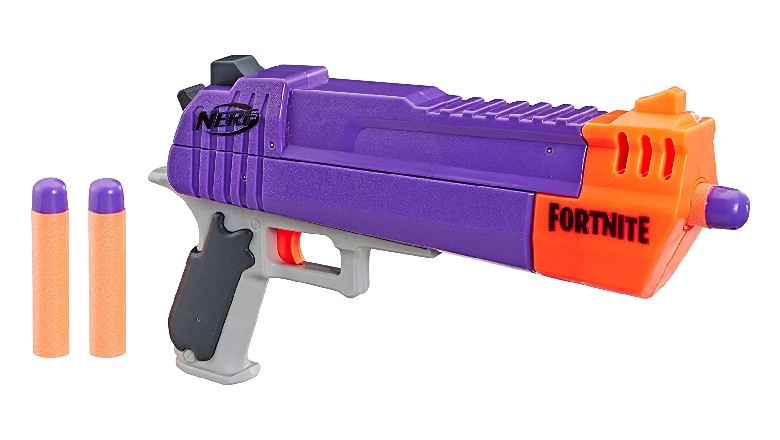 Enjoy working as a special ops agent with this stealthy Nerf Fortnite HC-E Mega Dart Blaster. No batteries are required for this bit of Nerf wonderfulness.

It couldn’t be simpler: load a dart into the barrel, pull back the top of the blaster, then fire away. The HC-E comes with three Nerf Mega darts made of reliably excellent Nerf material with flexible, hollow tips. Get on that mission, agent!

Save 20% on the Nerf Fortnite HC-E Mega Dart Blaster