When will the Lohan drama end? Apparently never since the mother of the troubled actress seems to want in on the action. Linday Lohan’s mother, Dina, is claiming that her ex-husband raped her and that the Lohan is “screwed up” as a direct result of a lifetime of witnessing the domestic violence.

Dina Lohan told reporters today that her ex-husband, Michael, punched her on at least one occasion and raped her on another during their rocky relationship. Dina made the shocking allegations during an interview at a Long Island hotel on Sunday equipped with police and medical reports as proof, reports the New York Daily News.

The first incident took place after a night out dining at an upscale restaurant in Cold Spring Harbor on Dec. 4, 1986, said the mom. As the night progressed, so did his drinking and coke-snorting.

“When we left he was drunk-driving and suddenly he started screaming, ‘Get the f— out of the car!’ ” she recalled.

That’s when Michael whopped her, bruising her cheek below the right eye, according to Dina. But Michael remembered the event happening a little differently.

“I came in at 2 o’clock in the morning after being out with some friends. I walked in and she hit me with an ice tray. With the back of my hand I slapped her in the face. Yes, it did happen in 1986. Were there any charges? No, not at all. I had a big black and blue on my neck from her,” he said.

Dina also told reporters that she was raped by Michael while living with her parents after the two had gotten a divorce. He showed up after another “coke-fueled night,” pleading for the mother to take her back. That’s when he raped her while her children slept, said Dina. When Dina’s parents came home, they insisted that she go to the hospital, which she did and had the medial papers to prove it .

Once again, Michael’s story differed in that he said the sex was consensual and that Dina took the lead.

“How can you rape a person when they’re on top of you?” he asked.

So who’s telling the truth here, Dina or Michael? Or are they just both equally screwed up? I’m going to go with the latter. And whether or not Lindsay is screwed up because of it all, well, hey, at least they can all be screwed up together. The apple doesn’t fall far from the tree, right? 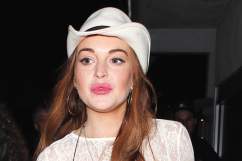 Speaking of Lindsay and her rebellious antics, here’s a shocker: Lindsay Lohan did not show up to court on Monday after charges were filed against the actress for allegedly hitting Tiffany Mitchell, a psychic reader from Palm Beach, Fla., at Avenue Lounge in Manhattan. Lohan’s attorney, Mark Heller, said she did not go to court because there is nothing for her to plead to.

“It’s my opinion that this case will ultimately be declined for prosecution, but it will be several weeks before the district attorney makes that decision,” Heller said.

Lohan was charged with misdemeanor assault after allegedly punching the psychic after she spotted the “Liz & Dick” actress out at the Manhattan club and tried to read her fortune.

Heller said Lohan will not go to court until an accusatory document is filed, which has yet to be done. At least LiLo isn’t completely in the wrong for this one.

Read More
Celebrities, Dina Lohan, Lindsay Lohan, Michael Lohan
Linday Lohan's mother, Dina, is claiming that the actress is so "screwed up" because of a lifetime of witnessing her abusive relationship with her ex-husband.