Director Adam McKay officially announced on his Facebook page that Kristen Wiig will be joining the cast of Anchorman 2.

“Kristen Wiig is officially on board for Anchorman 2. Couldn’t be more excited,” McKay said in the post.

Anchorman: The Legend Continues will bring back the antics of the Channel 4 news team with Will Ferrell and Christina Applegate reprising their lead roles as Ron Burgundy and Veronica Corningstone. Paul Rudd and David Koechner will be returning to the news team as well.

The news of the former Saturday Night Live star’s addition to the cast was further cheered by Applegate on Twitter.

“@ghostpanther: Just found out Kristen Wiig officially on board for Anchorman 2.Cannonball!”woohoo! That’s so great.

Details of what the Channel 4 gang will get themselves into in the new movie have not been released, but Carell said he anticipates much of the same comedy that made the first film a hit.

“I think it’s such a great ensemble piece that I would hope that our roles are the same as they were the first time around,” Carell said. “The storyline is going to be different, but I hope the people in it are exactly the same.”

The much anticipated sequel is set to arrive in theaters at the end of this year around the holidays. 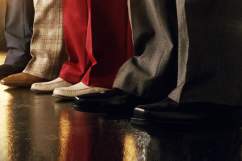