Okay, just a quick summary before getting into the chunkier details, if you like action movies with lots of explosions, ninja fights, and an easy to follow plot with some well placed humor, G.I. Joe Retaliation is right up your alley. If none of that stuff seems like your bag, you can stop reading now and go back to scanning Fandango for your weekend movie fare.

Going into this movie I really wasn’t sure what to expect. Yes, I had some idea from the trailer that it would revolve around trying to save the world from Cobra, and Dwayne Johnson would probably be pummeling some bad guys, but having not seen G.I. Joe: The Rise of Cobra, I was new to the movie franchise.

Unlike, the first installment of the franchise, Retaliation is directed by Jon M. Chu, better known for Justin Bieber: Never Say Never, those Step Up movies, and other crap that would probably force me to poke out my eyes. Chu didn’t disappoint though and delivered a fun, blow’em up popcorn movie from start to finish.

Upon opening, the world appears to be safe with the Cobra terrorist group in hiding, its leaders Cobra Commander and Destro serving out their time in a watery prison chamber. Using secret technology though, Cobra baddie Zartan (Arnold Vosloo) has infiltrated the government’s highest office and is masquerading as the United States President and plotting to start WW3. To quote Bruce Willis’ character of Joe Colton, “You’re telling me there’s an impostor president?” Yes, that’s exactly what I’m telling you. The G.I. Joes of course, aren’t going to put up with any of this and plan on using lots of machine guns (and some sex appeal courtesy of Adrianne Palicki) to stop Cobra’s evil plot.

The movie follows the current trend of reeling in audiences with the selling point of being in “eye-popping 3D!” While much of the movie could have done without this feature and nothing would be lost, there is a stunning high-wire fight scene between Snake Eyes, Jinx and a dozen ninjas on the side of a mountain that became that much more intense with the 3D aspect. Seriously, if you suffer from vertigo, this part of the movie might be a good time for a bathroom break – it’s intense.

The movie boasts an impressive cast with up-incoming stars Channing Tatum, Adrianne Palicki and Byung-hun Lee, along veterans like Bruce Willis. Make no mistake though, Dwayne Johnson is the biggest star of G.I. Joe Retaliation (both literally and figuratively). His time on screen is a well balanced mix of beat’em up, shoot’em up action and one-liner humor that works efficiently enough to move the story along.

G.I. Joe Retaliation isn’t a perfect action movie and probably won’t replace the spots reserved for Die Hard or Terminator 2: Judgement Day on your movie favorites list. It has the occasional slow scene and head-scratching jumps, like how the deserted Joes made it from the Middle East back to the United States without military support, but those moments become quickly forgettable once the next action sequence kicks off.

What G.I. Joe Retaliation does provide is roughly two hours of explosive action based around a well crafted storyline with some humor thrown in for good measure. 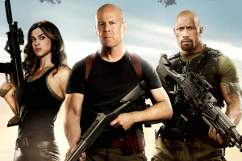